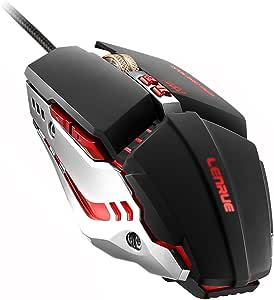 Brand: LENRUE
3.8 out of 5 stars 59 ratings
| 27 answered questions
Currently unavailable.
We don't know when or if this item will be back in stock.

3.8 out of 5 stars
3.8 out of 5
59 global ratings
How are ratings calculated?
To calculate the overall star rating and percentage breakdown by star, we don’t use a simple average. Instead, our system considers things like how recent a review is and if the reviewer bought the item on Amazon. It also analyzes reviews to verify trustworthiness.

Scott
4.0 out of 5 stars Feature laden mouse for a bargain basement price
Reviewed in the United States on July 21, 2018
Verified Purchase
When I bought this, I wasn't quite sure what I was getting for $10, but I have to say that I was pleasantly surprised. The mouse performs pretty much as advertised. I should qualify this statement by saying that I am a long time user of trackballs (nearly 30 years in fact), and I normally wouldn't even think of using a mouse. So, when I say that there is a lot to like about this device, one can be sure that I really mean it.
This isn't the absolute fastest mouse in the market as it maxes out at 4800 dpi, but it doesn't cost $40 either. Speed adjustment can be done in real time using the speed adjustment buttons located behind the scroll wheel or through the software (to be discussed later). Although I rarely use anything above 1200 dpi myself, I found the real time speed adjustment to be handy and convenient. I found all of the buttons and scroll wheel to be placed conveniently and suitably responsive, which is fairly important. Additionally, I found pointer accuracy (also programmable through the software) to be pretty solid, which is important for me as I do quite a lot of CAD design work.
As is noted in the product description, all of the buttons are programmable, but one must have the software to do it. However, the manufacturer does not provide the software in the package, which I found a bit odd and more than a little inconvenient. Rather, one must go to the seller to get a download link, which I had to find at the very end of the seller's detailed product description. Why this couldn't have been included in the packaging is beyond me, but there it is.
So, about the software. After finally downloading the software from the aforementioned link, I began the installation process, and, of course, there was a caveat. All of the installation dialogues are in Chinese, which as one may imagine, was a little vexing for someone who does not speak (or read) Chinese. So, when navigating the installation, one is forced to make educated guesses about which button to push. This is a fairly serious issue. Most international developers offer multilingual dialogues for their varied users, so I was rather puzzled by these only being in Chinese. That being said the software was eventually installed, but then I discovered all of the shortcuts and start menu locations were in Chinese as well. This resulted in me having to manually rename files and folder, as well editing the StartMenu folder in Windows so I could actually read these in English (another serious issue).
The actual software interface (once it is initialized) defaults to English, curiously enough, so after the harrowing ordeal of installation, at least programming the mouse features wasn't a total nightmare. As advertised, every button can be programmed, and the mouse can be set with up to five different configurations, should one have such a need. The speed resolution levels are even programmable, so when stepping through the various level on the mouse itself, one has full control of that aspect as well. Furthermore, in the LED settings, on can control the breathing rate of the LED cycles, select a single color (pink, red, purple, or blue), or turn them off altogether.
In summary, this gaming mouse offers an impressive suite of features for the price point and is fully customizable for even the most discerning of users. I can't speak to the endurance of the device, as I have had it for only a couple of days, but it's construction seems solid enough. The software, however, needs some work in terms of installation and OS integration, but that aside this is a solid mouse that will provide a satisfying experience for most.

Alan
4.0 out of 5 stars 7 buttons and metal wheel
Reviewed in the United States on July 24, 2018
Verified Purchase
I like 7 buttons and metal wheel. Surprisingly, it works on glossy white Formica counter top and software from provided link allows me to set 4000 dpi. Since dpi setting can be change, the two dpi buttons are free to assign micro. I thought it wouldn't come with interference reducer for the price. Removable Metal Plate is great for those who prefer lighter weight. Despite for $10 price tag I would be happy to rate it five star, like Scott Sartain said software installation could be better, so I opted to give it four. I wish micro could record not only keys but clicks as well. Thanks Amazon for 2 day shipping.
Read more

Yi
1.0 out of 5 stars Strongly NOT recomend buy this
Reviewed in the United States on October 31, 2018
Verified Purchase
I have no idea about the guy who designed this mouse, maybe he makes the sides of mouse be silver so it makes the mouse looks more "professional gaming", but the thing is, the sides are not make of metal. It's plastic painted to be silver!!! I'm not complaining about the texture of the mouse. THE THING IS: the painting fall off after one month use, the painting sticks to your finger and the smell is terrible, it takes me a long time washing my finger and there are still some left on it. I want a refund if I could, but one month for return already past!!
Read more

For the price it's a great value. It's not only comfortable but precise and accurate and DPI controls right on the mouse saves time from going into the settings of games and manually changing the sensitivity.
Read more
One person found this helpful
Helpful
Comment Report abuse

Chris Hacking
1.0 out of 5 stars You don't even get what you pay for
Reviewed in the United States on March 19, 2019
Verified Purchase
Pros:
* Looks cool
* Good size and weight (for me, but I have big hands)
* Dirt cheap

Cons:
* I cannot impress upon you hard enough how utterly garbage the software is. It's laggy, missing features it really should have (can't set a specific color on the LEDs? Can't set arbitrary values on the DPS scale? WTF?) tends to hang or outright crash, and comes in a *really* sketchy download.
* SCROLL WHEEL STOPPED WORKING after only a few months! It will sometimes scroll in the desired direction, but the speed could be anything from barely moving to leaping down/up. Often it will instead shudder up and down instead of moving in one direction, and sometimes it just straight up scrolls backwards or doesn't move at all. Completely unusable for things like web browsing, much less gaming!
Read more
Helpful
Comment Report abuse
See all reviews

Page 1 of 1 Start overPage 1 of 1
This shopping feature will continue to load items when the Enter key is pressed. In order to navigate out of this carousel please use your heading shortcut key to navigate to the next or previous heading.
Back
Next
Pages with related products. See and discover other items: the best gaming laptop, editing and gaming pc, fortnite gaming mouse, programming mouse