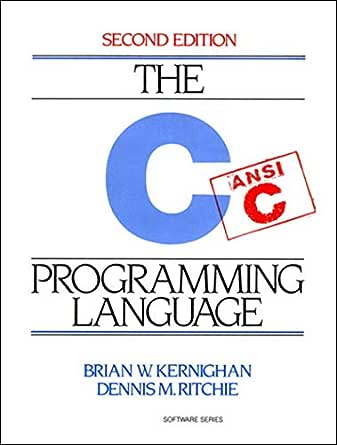 Just about every C programmer I respect learned C from this book. Unlike many of the 1,000 page doorstops stuffed with CD-ROMs that have become popular, this volume is concise and powerful (if somewhat dangerous) -- like C itself. And it was written by Kernighan himself. Need we say more? --This text refers to the paperback edition.

This second editon describes C as defined by the ANSI standard. This book is meant to help the reader learn how to program in C. The book assumes some familiarity with basic programming concepts like variables, assignment statements, loops, and functions. A novice programmer should be able to read along and pick up the language. --This text refers to the paperback edition.

The computing world has undergone a revolution since the publication of The C Programming Language in 1978. Big computers are much bigger, and personal computers have capabilities that rival the mainframes of a decade ago. During this time, C has changed too, although only modestly, and it has spread far beyond its origins as the language of the UNIX operating system.

The growing popularity of C, the changes in the language over the years, and the creation of compilers by groups not involved in its design, combined to demonstrate a need for a more precise and more contemporary definition of the language than the First edition of this book provided. In 1983, the American National Standards Institute (ANSI) established a committee whose goal was to produce "an unambiguous and machine-independent definition of the language C," while still retaining its spirit. The result is the ANSI standard for C.

The standard formalizes constructions that were hinted at but not described in the first edition, particularly structure assignment and enumerations. It provides a new form of function declaration that permits cross-checking of defini-tion with use. It specifies a standard library, with an extensive set of functions for performing input and output, memory management, string manipulation, and similar tasks. It makes precise the behavior of features that were not spelled out in the original definition, and at the same time states explicitly which aspects of the language remain machine-dependent.

This second edition of The C Programming Language describes C as defined by the ANSI standard. Although we have noted the places where the language has evolved, we have chosen to write exclusively in the new form. For the most part, this makes no significant difference; the most visible change is the new form of function declaration and definition. Modern compilers already support most features of the standard.

We have tried to retain the brevity of the first edition. C is not a big language, and it is not well served by a big book. We have improved the exposition of critical features, such as pointers, that are central to C programming. We have refined the original examples, and have added new examples in several chapters. For instance, the treatment of complicated declarations is augmented by programs that convert declarations into words and vice versa. As before, all examples have been tested directly from the text, which is in machine-readable form.

As we said in the preface to the first edition, C "wears well as one's experience with it grows." With a decade more experience, we still feel that way. We hope that this book will help you to learn C and to use it well.Brian W. Kernighan, Dennis M. RitchiePreface to the First Edition

C is a general-purpose programming language which features economy of expression, modern control flow and data structures, and a rich set of operators. C is not a "very high level" language, nor a "big" one, and is not specialized to any particular area of application. But its absence of restrictions and its generality make it more convenient and effective for many tasks than

C was originally designed for and implemented on the UNIX operating sys-tem on the DEC PDP-1 1, by Dennis Ritchie. The operating system, the C compiler, and essentially all UNIX applications programs (including all of the software used to prepare this book) are written in C. Production compilers also exist for several other machines, including the IBM System/370, the Honeywell 6000, and the Interdata 8/32. C is not tied to any particular hardware or system, however, and it is easy to write programs that will run without change on any machine that supports C.

This book is meant to help the reader learn how to program in C. It contains a tutorial introduction to get new users started as soon as possible, separate chapters on each major feature, and a reference manual. Most of the treatment is based on reading, writing and revising examples, rather than on mere statements of rules. For the most part, the examples are complete, real programs, rather than isolated fragments. All examples have been tested directly from the text, which is in machine-readable form. Besides showing how to make

effective use of the language, we have also tried where possible to illustrate useful

algorithms and principles of good style and sound design.

The book is not an introductory programming manual; it assumes some familiarity with basic programming concepts like variables, assignment statements, loops, and functions. Nonetheless, a novice programmer should be able to read along and pick up the language, although access to a more knowledgeable colleague will help.

In our experience, C has proven to be a pleasant, expressive, and versatile language for a wide variety of programs. It is easy to learn, and it wears well as one's experience with it grows. We hope that this book will help you to use it well.Brian W. Kernighan, Dennis M. Ritchie

Brian W. Kernighan received his BASc from the University of Toronto in 1964 and a PhD in electrical engineering from Princeton in 1969. He was a member of the Computing Science Research center at Bell Labs until 2000, and is now a professor in the Computer Science Department at Princeton. He was a co-creator of several programming languages, including AWK, AMPL, and a number of tools for document preparation. He is the co-author of 10 books and some technical papers, and holds 4

patents. He was elected to the National Academy of Engineering in 2002. His research areas include programming languages, tools and interfaces that make computers easier to use, often for non-specialist users. He is also interested in technology

Dennis Ritchie was a computer scientist notable for his influence on ALTRAN, B, BCPL, C, Multics, and Unix.