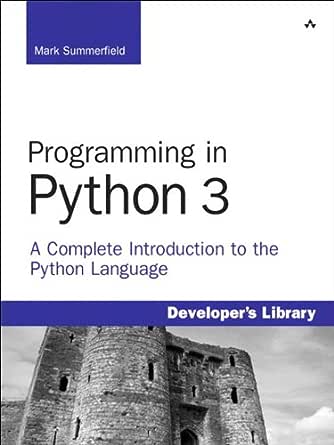 Flip to back Flip to front
Audible Sample Playing... Paused   You are listening to a sample of the Audible narration for this Kindle book.
Learn more
ISBN-13: 978-0137129294
ISBN-10: 0137129297
Why is ISBN important?
ISBN
This bar-code number lets you verify that you're getting exactly the right version or edition of a book. The 13-digit and 10-digit formats both work.

Programming in Python 3: A Complete Introduction to the Python Language
$24.10
(108)
Available for download now.

A sample chapter and all the book's examples can be downloaded from the book's web page. (Amazon don't allow URLs so google for "qtrac" to find the page.) --This text refers to an out of print or unavailable edition of this title.

Python is probably the easiest-to-learn and nicest-to-use programming language in widespread use. Python code is clear to read and write, and is concise without being cryptic. Python is a very expressive language, which means that we can usually write far fewer lines of Python code than would be required for an equivalent application written in, say, C++ or Java.

Python is a cross-platform language: In general, the same Python program can be run on Windows and Unix-like systems such as Linux, BSD, and Mac OS X, simply by copying the file or files that make up the program to the target machine, with no “building” or compiling necessary. It is possible to create Python programs that use platform-specific functionality, but this is rarely necessary since almost all of Python’s standard library and most third-party libraries are fully and transparently cross-platform.

One of Python’s great strengths is that it comes with a very complete standard library—this allows us to do such things as download a file from the Internet, unpack a compressed archive file, or create a Web server, all with just one or a few lines of code. And in addition to the standard library, thousands of third-party libraries are available, some providing more powerful and sophisticated facilities than the standard library—for example, the Twisted networking library and the NumPy numeric library—while others provide functionality that is too specialized to be included in the standard library—for example, the SimPy simulation package. Most of the third-party libraries are available from the Python Package Index, pypi.python.org/pypi.

The purpose of this book is to show you how to write Python programs in good idiomatic Python 3 style, and to be a useful reference for the Python 3 language after the initial reading. Although Python 3 is an evolutionary rather than revolutionary advance on Python 2, some older practices are no longer appropriate or necessary in Python 3, and new practices have been introduced to take advantage of Python 3 features. Python 3 is a better language than Python 2—it builds on the many years of experience with Python 2 and adds lots of new features (and omits Python 2’s misfeatures), to make it even more of a pleasure to use than Python 2, as well as more convenient, easier, and more consistent.

The book’s aim is to teach the Python language, and although many of the standard Python libraries are used, not all of them are. This is not a problem, because once you have read the book, you will have enough Python knowledge to be able to make use of any of the standard libraries, or any third-party Python library, and be able to create library modules of your own.

The book is designed to be useful to several different audiences, including self-taught and hobbyist programmers, students, scientists, engineers and others who need to program as part of their work, and of course, computing professionals and computer scientists. To be of use to such a wide range of people without boring the knowledgeable or losing the less-experienced, the book assumes at least some programming experience (in any language). In particular, it assumes a basic knowledge of data types (such as numbers and strings), collection data types (such as sets and lists), control structures (such as if and while statements), and functions. In addition, some examples and exercises assume a basic knowledge of HTML markup, and some of the more specialized chapters at the end assume a basic knowledge of their subject area; for example, the databases chapter assumes a basic knowledge of SQL.

The book is structured in such a way as to make you as productive as possible as quickly as possible. By the end of the first chapter you will be able to write small but useful Python programs. Each successive chapter introduces new topics, and often both broadens and deepens the coverage of topics introduced in earlier chapters. This means that if you read the chapters in sequence, you can stop at any point and you’ll be able to write complete programs with what you have learned up to that point, and then, of course, resume reading to learn more advanced and sophisticated techniques when you are ready. For this reason, some topics are introduced in one chapter, and then are explored further in one or more later chapters.

Two key problems arise when teaching a new programming language. The first is that sometimes when it is necessary to teach one particular concept, that concept depends on another concept, which in turn depends either directly or indirectly on the first. The second is that, at the beginning, the reader may know little or nothing of the language, so it is very difficult to present interesting or useful examples and exercises. In this book, we seek to solve both of these problems, first by assuming some prior programming experience, and second by presenting Python’s “beautiful heart” in Chapter 1—eight key pieces of Python that are sufficient on their own to write decent programs. One consequence of this approach is that in the early chapters some of the examples are a bit artificial in style since they use only what has been taught up to the point where they are presented; this effect diminishes chapter by chapter, until by the end of Chapter 7, all the examples are written in completely natural and idiomatic Python 3 style.

The book’s approach is wholly practical, and you are encouraged to try out the examples and exercises for yourself to get hands-on experience. Wherever possible, small but complete programs are used as examples, to provide realistic use cases. The examples and excercise solutions are available online at www.qtrac.eu/py3book.html—all of them have been tested with Python 3.0 final on Windows and Unix.

The Structure of the Book

Chapter 5 shows how to create custom modules and packages and provides an overview of Python’s standard library so that you will have a good idea of the functionality that Python provides out of the box and can avoid reinventing the wheel.

Chapter 8 revisits material covered in some earlier chapters, exploring many of Python’s more advanced features in the areas of data types and collection data types, control structures, functions, and object-oriented programming. This chapter also introduces many new functions, classes, and advanced techniques, including functional-style programming—the material it covers is both challenging and rewarding.

Most of the book’s chapters are quite long to keep all the related material together in one place for ease of reference. However, the chapters are broken down into sections, subsections, and sometimes subsubsections, so it is easy to read at a pace that suits you; for example, by reading one section or subsection at a time.