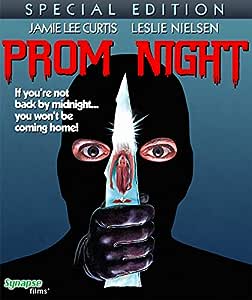 Four Hamilton High seniors are hiding a terrible secret. What happened to Robin Hammond six years ago was a game that turned into a horrible tragedy, and someone saw what they did... someone waiting for gruesome revenge! Wearing a black hood and wielding an axe, a killer brutally slaughters the teenagers one by one at their high school prom. As the spotlight falls on the newly crowned prom king and queen, the psychopath will show everyone his new favorite game to play...

Are you ready for a bloody night of Disco Madness ? Synapse Films is proud to present PROM NIGHT in a beautiful new version, remastered and restored in 2K from the original 35mm camera negative with an all-new 5.1 surround mix.
Region A.

4.7 out of 5 stars
4.7 out of 5
179 global ratings
How are ratings calculated?
To calculate the overall star rating and percentage breakdown by star, we don’t use a simple average. Instead, our system considers things like how recent a review is and if the reviewer bought the item on Amazon. It also analyzes reviews to verify trustworthiness.

Jimmy R
4.0 out of 5 stars IF YOU'RE NOT BACK BY MIDNIGHT, YOU WON'T BE COMING HOME!
Reviewed in the United States on September 9, 2014
Verified Purchase
One of my favorite 80's horror flicks finally gets the loving respect it deserves in a Synapse special edition Blu Ray (also on DVD). Before you start thinking, "oh great, yet ANOTHER issue of this 1980 slasher.", hold up, this one is different and presented like never before, and packed with solid special features which include:
- A new beautiful 2K scan HD transfer in 16x9 1.78.1
- A brand new 5.1 surround sound mix specially created for this release (also in original 2.0 mono)
- Captioning in English (only) for the hearing impaired or hard of hearing.
- Reversible cover featuring the classic original poster art & foreign version, which looks very nice too.
- About 9 minutes of additional scenes that were added for the original NBC TV Broadcast (though nothing spectacular)
- A new 25 minute behind the scenes making of Featurette: The Horrors of Hamilton High: The Making of "Prom Night".
- An insightful audio commentary with Director Paul Lynch & Screenwriter William Gray (the moderator is very annoying!)
- The original trailer & rarely seen tv spots (4 of them) were nice too; which were legendary in 1980, with the great tag line:
"If you're not back by midnight, you won't be coming home!". Great memories!

My only complaints are that during the 23 minutes of rare outtakes (exclusive to the Blu Ray version), there's no dialogue, it's just music from the soundtrack, and it would have been nice to hear what's being flubbed and talked about between takes. Also, the old iconic Avco/Embassy logo is missing from the opening, despite everyone talking about A/E in the extras... It says on the packaging that the program content is licensed from Echo Bridge, and none of their (EB's) previous DVD versions had the A/E opening.. I can't recall if the original 1998 Anchor Bay DVD had it either.. It's not a big deal, but that opening was one of my favorite studio logos when I was a kid.

Sadly, Jamie Lee Curtis did not take part in the extras, which is disappointing considering that she was part of last year's Scream Factory Special Edition release of The Fog, and previous Halloween disc extras.... It could possibly be a result of a fee dispute, but I'm just guessing.. I do recall her talking about Prom Night on The Fog SE, so maybe to her, that was good enough..

Overall, despite the very minor personal cons, I think this SE is definitely worth the upgrade from any previous versions, which by the way, never had any special features, aside from the '98 Anchor Bay DVD which just had the theatrical trailer.
So I am very satisfied with this, and it was well worth the wait..

Serkan Okar
2.0 out of 5 stars Prom Night 1980 - OK but not GREAT.
Reviewed in the United States on July 3, 2017
Verified Purchase
I am sorry to disagree with the overall ratings for this movie but I need to be honest. I bough this item because I remembered it from my childhood. TV shows and movies from childhood often have nostalgic value which makes them enjoyable even the TV show/movie is not as great as you remembered it to be. I love classic 80s slasher movies (Halloween and Friday the 13th are my favorites). However, in my opinion, Prom Night 1980 fails as a slasher. It begins very promising and I must say the child actors in the opening scenes are probably better than some of the adult actors later in the picture. ***SPOILER ALERT*** The mysterious shadow looms over the accidentally murdered victim and then we are 10 years in to the future. My biggest problem with the movie is the murder scenes are flat and not effective. The first murder is a slow-motion scene where the murderer puts his hand on the victim's mouth from behind and we get to see the to--be victim's eyes; it just doesn't feel realistic, as I don't think a victim would just look terrified in what appears to be an extended point of time. I think she would at least put her hand out or try to get the hand away from her mouth. But I think the 2nd murder is even less effective. A couple is inside the van, and then suddenly the doors of the van open, you see the murderer in a brief second and the woman is already lying on her back almost dead, as if she died instantly (nobody dies instantly like that especially with no convulsion or movement), as we watch the murderer continue to stab her throat(?). I am not much for bloody gore scenes. I could do without them. But if they are part of a slasher then they'd better be done right. In this movie, the first two murder scenes were not done right. And I don't think the climax on the dance floor works either. Something about the disco music and the dance floor, they don't create the tense atmosphere a slasher requires. As for the blu-ray, HD transfer is very good, both video and audio. There are quite a few extras including feature commentary. If you are already familiar with this film, then go ahead and buy it. But if you vaguely remember it, don't be deceived thinking that it is a cult classic. The overall premise is good but the flaws in the execution of some of the scenes prevent the film from being great.
Read more
2 people found this helpful
Helpful
Comment Report abuse

LeeVet93
5.0 out of 5 stars ~ Kelly.... can you come out to play?!"
Reviewed in the United States on October 6, 2015
Verified Purchase
Wow, what can I say about this particular edition?! It completely rocks if you love this movie and Jamie Lee Curtis. Synapse has really done an exceptional job on this movie. It has NEVER looked this good and the special features are outstanding. Animated menu with background music from the "Prom" with easy selections.
Bonus Features are ~
~Horrors of Hamilton High - "The Making Of Prom Night"
~Original Theatrical Trailer
~TV Spots
~Radio Spots
~Motion Still Gallery
~Additional TV Footage that was shot for the Television premiere (As this movie had to be trimmed from the nudity, etc.) (11:11 in length)
~Never before seen outtakes from original Prom Night shooting script.
Widescreen
Audio Setup ~
English DTS-HD 5.1
English DTS-HD 2.0 Mono
Audio Commentary with Director Paul Lynch and Screenwriter William Gray Moderated by Paul Jankiewicz
English Subtitles for the Deaf and Hard of Hearing
The movie running time is about 1:32:44 with Credits.
See Jamie Lee in one of her first "Scream Queen" roles showing off her cleavage in several shots.

Look for a few actresses that played some of the roles in the movie like that of "Kelly", Marybeth Rubens who I thought was really nice looking.
We didn't get to see Jamie Lee herself in the special features talking about the movie, but she was mentioned more than once and I believe she talks about Prom Night in the features on "The Fog" movie Blu-ray. All in all, a really good edition to have if you love Jamie Lee in her early horror heyday.
Read more
8 people found this helpful
Helpful
Comment Report abuse
See all reviews

A. W. Wilson
3.0 out of 5 stars PROM NIGHT DVD REGION ONE SP EDITION from SYNAPSE FILMS
Reviewed in the United Kingdom on December 14, 2019
Verified Purchase
This may be a bit complicated. My first copy from another company was advertised here as having subtitles. It didn't and I wrote a review mistakenly giving the film 4 stars even though I had only checked the first 10 mins for said subs and quality (which was good). Being a bit stubborn I ordered this Region One copy from Synapse (Special edition) and it DOES have subtitles. Sadly the film turned out to be quite a disapointment. No suspense, poor direction, making the murders almost boring and way too prolonged and lacking any tension. This has to be the director's fault tho a tough editor may have pressed for better pacing in the editing room. The "Disco" music is boring and we had too much of it. Plot holes abound, particularly why was NO ONE around during the second murder and why did everyone disapear during the climax at the prom?? Most lovers of the genre will be dispointed at the lack of action/gore/blood (I do hate the word gore), the fact that Leslie Nielsen is hardly in it and gets top billing (and plays it very straight)doesn't help. All I can say is "thankyou" Jamie Lee for making the film at least bearable. Excellent quality picture sound and subs with some interesting looking extras, not watched yet by me. Hardcore fans only for this one, and I must amend my other review to 3 stars.
Read more
Report abuse

Page 1 of 1 Start overPage 1 of 1
This shopping feature will continue to load items when the Enter key is pressed. In order to navigate out of this carousel please use your heading shortcut key to navigate to the next or previous heading.
Back
Next
Pages with related products. See and discover other items: leslie nielsen