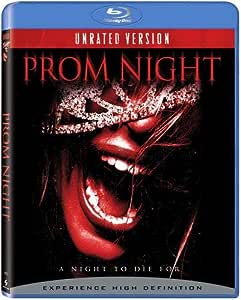 Secure transaction
Your transaction is secure
We work hard to protect your security and privacy. Our payment security system encrypts your information during transmission. We don’t share your credit card details with third-party sellers, and we don’t sell your information to others. Learn more
Details
Ships from
Amazon.com
Sold by
Amazon.com
Prom Night (Unrated Blu-r... has been added to your Cart
New & Used (30) from
$5.99 & FREE Shipping

Three years ago, Donna (Brittany Snow, John Tucker Must Die) watched in horror as an obsessed predator (Johnathon Schaech, That Thing You Do!) murdered her family. Tonight is her senior prom and although she's anxious about the past, she's excited to celebrate her future with her friends. What Donna doesn't know is that the deranged psychopath has escaped from the asylum. He's returned to hunt her down, intent on killing anyone who gets in his way. As the night races towards its heart-pounding conclusion, the question becomes not who will be prom queen, but who will survive the killer's rampage.

An attractive cast of young performers lead by Brittany Snow (Hairspray) is the main selling point for Prom Night, a remake of the 1980 Canadian slasher film starring Jamie Lee Curtis. Snow makes for a capable lead as the sole survivor of her family's massacre at the hands of an obsessed teacher (Jonathan Schaech), who returns three years later to finish his campaign on the eve of her senior prom. While no one's idea of a classic horror film, the Paul Lynch-directed Prom Night offered viewers a modest whodunit angle in between the killings; here, the villain's identity is known from the get-go, and what's left is a string of mechanical stalkings (which feature a surprisingly modest amount of blood) and reams of turgid teenspeak, which is handled as best as possible by Snow and her cast mates. The end result is a dull, suspense-free chiller that manages to make its mediocre source material seem inspired by comparison. Older moviegoers may note the presence of actors Idris Elba and James Ransone, both used so well on The Wire, and so thoroughly wasted here. --Paul Gaita

4.5 out of 5 stars
4.5 out of 5
932 global ratings
How are ratings calculated?
To calculate the overall star rating and percentage breakdown by star, we don’t use a simple average. Instead, our system considers things like how recent a review is and if the reviewer bought the item on Amazon. It also analyzes reviews to verify trustworthiness.

Terri_226
2.0 out of 5 stars Just okay....SPOILER ALERT.
Reviewed in the United States on July 24, 2017
Verified Purchase
Overall, I would say the movie is eh okay. If you're interested in a cheesy predictable movie, or if you are a beginner when it comes to watching a thriller, then this movie is for you. It's not the worst thriller I've seen but definitely nowhere near a good to the best one I've seen. When I say thriller, I am not referring to any movies with a supernatural evil element. Anyways, there were too many cliches and to me, the trailer was a false advertisement. In addition to unrealistic plot points.

First problem, how does a man who murdered a whole family escape from an institution and the detective and other officials who were responsible for his imprisonment is NOT notified immediately but instead 3 days later? Especially given the circumstances on how he is locked up.

My other problem with the movie: why and how is it that everyone conveniently wanders off on their own, by themselves in a big hotel where they are not familiar with???

Third problem: If Claire was on her period, and her boyfriend began tripping, why did she even stay at the prom? I know she didn't want her night to be ruined, but come on. When she was in that sweet by herself and felt she was not alone and knowing her girlfriend just left, she should have bounced. I get it...that's the point of the movie...lol, but still. Her part did not make much sense.

Fourth problem: Lisa and her boyfriend were expected to win prom queen and king. Why did they insist on going to the sweet to have sex knowing the DJ and the principal were going to announce who the winners were? And....took the phone off the hook! They could not have been that horny. That part did not make sense AT ALL! NOT AT ALL! If Lisa recognized him and knowing what he was capable of doing, she should have told her boyfriend and they should have gone down together, not by herself. They had no business leaving in the first place. Hull....

Fifth problem: okay, the hotel is being evacuated....why and how did she manage to get on the elevator? Elevators in an emergency crisis like that no longer operate. It does not go up beyond the first level.

It seems like the only rising action was when their teacher was in pursuit of Lisa. Other than that, the movie lacks a solid plot that leads up to climaxes and rising action. All that we see happening is people going to a sweet and being butchered because they either a) saw and could identify the man and he had to kill them or b) they are friends with his prey and they are conveniently at the wrong place at the wrong time. Basically, the viewers are not left with any element of surprise. Everyone knows whoever went to the sweet was going to be murdered. Lol. Bottom line. Great movie for someone who is nervous about watching a slasher film though. I would recommend the movie for a beginner.

Russell STop Contributor: Star Wars
TOP 1000 REVIEWER
4.0 out of 5 stars not bad at all and not much gore.
Reviewed in the United States on February 23, 2016
Verified Purchase
I will not extoll the virtues of this movie because it was pretty good and it did hold my attention. The cast is an attractive one and that includes the killer who you find out about from the start. An ex-teacher who is obsessed with the lovely blonde girl. He went to jail and 5 years later he has escaped and it is Prom night. What lesson did we learn here? It is a death sentence to be a friend (not all get it) or boyfriend of the object of the killer! Jonathan Schaech is eerie as the killer, he is very handsome and still scary. The young cast is attractive and does a pretty good job. We still get the usual dumb things that go hand in hand with slasher movies (but not much gore!). Bad decisions and falling down but we get used to them.
Read more
3 people found this helpful
Helpful
Report abuse

Shelly P.
3.0 out of 5 stars The Insanity plea is a waste of time.
Reviewed in the United States on August 29, 2016
Verified Purchase
I watched this once in theaters maybe and for me it was nostalgic because it was the end of high school for me as well so I think I was biased. I gave it more credit than it deserved lol. I love Brittany Snow and became a fan of hers from American Dream. I enjoyed Would You Rather? but this isn't supposed be in those lines of gore and blood everywhere, which is fine.
You have to do what you have to for that PG-13 rating and if that means omitting a blood bath then by all means.
PERSONALLY. All of this could have been avoided if the sentencing wasn't Insanity.
And if that wasn't the case then sex can wait when you aren't in line for a hotel room with your friends. Two beds for three couples?
And you know what? Thank god for the evolution of the internet and criminal intelligence analysts.
Read more
One person found this helpful
Helpful
Report abuse

alaskanchick
3.0 out of 5 stars Totally cheesy, but I enjoyed it
Reviewed in the United States on December 25, 2020
Verified Purchase
This isn't one I could watch over and over, but it is a fun horror movie. I'm not a fan of gore, so I'm all about PG-13 style slashers. There are cheesy moments and it's not one of the greats, but if you're looking for a B movie romp, this is not a bad choice.
Read more
Helpful
Report abuse

fourty-two
1.0 out of 5 stars Unrated? How?
Reviewed in the United States on August 15, 2018
Verified Purchase
Blacked out kill scenes. No gore, no nudity, not even any cussing. What’s the pg13 version? A kiddie cartoon? Had to force myself to watch, rolling my eyes throughout entire stupid movie. Waste of money.
Read more
One person found this helpful
Helpful
Report abuse

Shayla
5.0 out of 5 stars Nostalgic
Reviewed in the United States on November 4, 2018
Verified Purchase
This was one of my favorite movies growing up! Good soundtrack, good cast chemsitry, and really threw me back my high school days.
Read more
Helpful
Report abuse
See all reviews

FRANK HENRY
5.0 out of 5 stars Great movie. Really scary
Reviewed in the United Kingdom on May 14, 2017
Verified Purchase
Prom night what can I say it was really scary..I loved it. I thought the acting in was brillant. Loved it so much. Brittany snow was class in it. So was johnathon schaech. Great movie. Loved it
Read more
Report abuse

Samuel Barber
3.0 out of 5 stars The End of Childhood/The Beginning of Adulthood
Reviewed in the United Kingdom on February 13, 2015
Verified Purchase
Although Idris Elba puts in a good performance, I didn't get to see all of it because the dvd was faulty and stopped playing two thirds of the way through. I got my money back but it still spoilt my enjoyment of the film.

From what I saw, I still thought the antagonist was a machine rather than an all-rounded human being that you could connect with at some level.
Read more
Report abuse

Keeley
5.0 out of 5 stars Enjoyed it.
Reviewed in the United Kingdom on January 17, 2016
Verified Purchase
Great, loved the movie. I like the classic one better but this one was still good, completely different story/plot than the original. But still cool.
Read more
One person found this helpful
Report abuse

The Late Review
1.0 out of 5 stars If you have trouble sleeping this film will help you out
Reviewed in the United Kingdom on January 22, 2019
Verified Purchase
Two words to describe this so called remake, Piss Poor
Read more
One person found this helpful
Report abuse