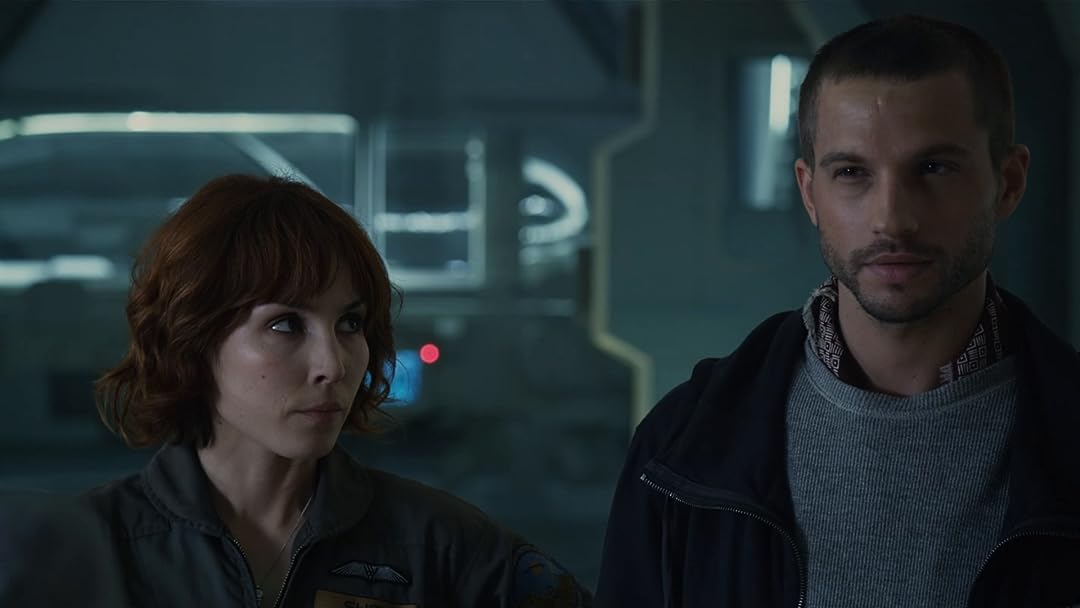 ChrisSherrillReviewed in the United States on September 19, 2019
2.0 out of 5 stars
Disappointing
Verified purchase
The movie was disappointing on a number of levels, but let’s do the good stuff first: terrific CGI. Umm, that’s about it.
Now disappointments: SPOILERS AHEAD the story was confusing at points: 1) at one point David (Michael Fassbender), the artificial human, spikes Dr Holoway’s (Logan Marshall-Green) drink which will kill him but, apparently, not before allowing him to impregnate his partner, Dr Shaw (Noomi Rapace) with a truly horrid creature, which turns out to be the progenitor of the aliens in the movies of that series. Where did they get that technology? 2) Dr Shaw sees the ultrasound and promptly gives herself a Caesarian Section, after which she runs and jumps and, other than a few grunts and groans, is no worse for the wear. 3) the scientists lost in the pyramid find a new creature and promptly start ‘playing’ with it. Really? Really? What utter nonsense. And yes, it kills them and some others (I said there’d be spoilers). 4) Dr Shaw knows from sad experience that she cannot trust David, yet when he says he can fly the alien craft, she carries off his body and head (despite her recent C Section), with the suggestion that the two will be reunited, so that he can fly her off to some 'home world' where she is going to ask the aliens why they decided to eliminate humans. They were just responsible for savaging the entire crew, but she thinks she can get some answers from them (duh). And why would he not just fly her to earth when he's put back together, which he wanted to do?
I was also disappointed with the acting. I thought Noomi Rapace was terrific in the Girl with the Dragon Tattoo series. She is not as good here - the role didn't suit her, IMO. Charlize Theron was not convincing at all. She’s pretty, which is poor praise for a movie star. Idris Elba did well, but he didn’t save the movie. The others were just good.
Overall, unless you are a huge Alien fan or a huge sci-fi fan, I don’t think this will be satisfying.

Chrissy BReviewed in the United States on August 30, 2017
4.0 out of 5 stars
Watch before Alien Covenant
Verified purchase
I watched the movie "Prometheus" today to see what I was missing from "Alien: Covenant". I did not know "Prometheus" was the first of the prequels to the "Alien" series. Watching "Covenant" first, I felt I was missing information. Now watching this I was able to piece most of the story together and how the Xenomorph creatures came to be. Like all the movies in the series, it starts off slow, and then turns into an action filled bloody nightmare. I really like the writer's perspective on the concept of human/alien/artificial evolution and it's purpose. The Xenomorphs have haunted my dreams since I was 7 years old, and watching this movie still sparked that inner fear of those creatures. I need to stop watching these movies alone at night. Another sci fi series that really questions about the creation of androids and why I feel it's a bad idea! As a fan of the "Alien " series, I am glad to have this movie in my collection. Not only are they horror stories, you can still nerd out on what-if concepts of life.
88 people found this helpful

Lisa MillwoodReviewed in the United States on August 4, 2017
2.0 out of 5 stars
Not worth watching
Verified purchase
Boring movie. I am not sure what drugs the people are on that rated it with 5 stars? I thought since Charlize Theron was in it, it should be semi good right? I should have known better. She really depends on her looks to get her by in most movies. And she is pretty so I understand. Seemed like an awful lot of this movie was "borrowed" from Alien. I wouldn't recommend this to anyone. Sorry, that I paid for it.
44 people found this helpful

karmaReviewed in the United States on September 4, 2020
1.0 out of 5 stars
Idris Elba with a Southern accent - that says it all
Verified purchase
With Charlize Theron, Idris Elba, and Noomi Rapace, directed by Ridley Scott, I expected this movie to be awesome. Far from it. TBH, it was pretty bad, with a silly Alien-ish plot and wooden performances that made me yearn for Sigourny Weaver. Worst of all, the wondrous Idris Elba is stunted by having to speak in a laborious Southern accent. The only role that seemed natural was, ironically, that of the robot, nicely performed by Michael Fassbender.
14 people found this helpful

ThunderbirdReviewed in the United States on September 15, 2018
3.0 out of 5 stars
No closure
Verified purchase
I watched it with my fiance and by the end I was a little embarrassed I'd made him sit through it. The cinematics was, admittedly, great, but nothing really happened. It's the prelude to Aliens or something, so we do get that little "ah ha" moment, but overall I felt cheated that I'd sat through the whole movie only to be denied a satisfiying interaction with our alien forebears. My investment wasn't worth the payoff in the end. 3 stars for great acting and brilliant effects, but the end fell disappointingly short.
18 people found this helpful

Crow-ConspiratorReviewed in the United States on November 24, 2018
3.0 out of 5 stars
A Confusing, if Watchable Mess
Verified purchase
Chariots of the God! Ancient astronauts put us here and now we’re going to look for them. There’s an artificial person whose prime directive is, “Oh, what the Hell.” Can’t say much more without including spoilers. I think it was conceived as a Big Statement picture, but if they ever had one it got lost somewhere. There is a very explicit but shallow Faith versus, well, Chariots of the Gods theme that never really comes to anything. It’s watchable enough, with some scary monsters and action and spaceships, but it lacks the engaging, gritty atmosphere of the original.
15 people found this helpful

joel wingReviewed in the United States on March 26, 2020
3.0 out of 5 stars
Some great alien scenes but the story is a mess
Verified purchase
Prometheus was a trainwreck of a movie. It was the prequel to the first Alien movie and was supposed to explain where the monsters came from and how they were created. It had beautiful special effects and settings, some shocking monster scenes, but the script was so full of holes you couldn’t be anything but disappointed when the movie was over. Director Ridley Scott said the inconsistencies in the script were there on purpose because this was the first in a trilogy and the missing information would be revealed in later films, but that is still a poor excuse for what they did to the story. Even with this criticism it’s still worth watching just for the Alien scenes.

Prometheus is from Greek mythology. He was a Titan who created mankind out of clay and gave them fire and civilization in defiance of the gods. That ties in with the main plot as the story begins with an alien landing on an early Earth and unleashing his DNA into the environment that would give birth to life on the planet. Things then flip to the future as a scientist team of Elizabeth Shaw (Noomi Rapace) and Charlie Holloway (Logan Marshall-Green) discover that aliens visited the Earth. They want to know what role the extra-terrestrials played in the planet’s history. They are funded by a billionaire Peter Weyland (Guy Pearce) who travels with them and a team to a planet they think the aliens originally came from. What starts out as a quest for the origins of life becomes a struggle to survive as they run into a deadly pathogen the aliens left behind.

The plot harkens back to an old motif dating back to at least the Frankenstein story of Marry Shelley that when man tries to mess with and control nature nothing good can come from it. Thus, when a robot on the team David (Michael Fassbender) starts experimenting with the alien artifacts he unleashes a plague upon the humans. That leads to two amazing scenes with the aliens.

The first half of the movie is great, but the second half has major problems. Here are some of them. David finds an alien black substance, and gives it to Charlie to experiment with. He simply lets it loose upon everyone in the ship including himself with no control over it, and he’s supposed to be a super genius robot who obviously never heard of the scientific method. The substance also has all different effects upon people. Charlie gets sick and turns his flesh black. In another it deforms his body and turn him into a monster. He’s all hunched over like a crab on the ground and a crew member just walks up to him like that’s perfectly normal. So maybe Charlie was going to turn out like the second guy, but still. In Elizabeth it makes a baby. She then gives birth to a little monster and doesn’t tell anyone. That’s especially galling because the first thing she runs into is David. She doesn’t talk to him even though she knows he set up her up with the baby. It turns out all she cares about is discovering the aliens even though there’s a little alien monster on the ship. The other person with David is Peter Weyland. Everyone thought he was dead but he was really on the ship wanting to meet the aliens. Why did he pretend to have passed? There’s no reason. There’s more issues as well, but it just shows you how poorly written the second part of the movie was.

Prometheus is still worthwhile to see the aliens. They really came up with some new things that will make you squirm. The start of the film is also very strong. You just have to suspend you sense of reality because the story really starts felling apart.
C

AReviewed in the United States on November 21, 2020
2.0 out of 5 stars
Hot Garbage
Verified purchase
I listened to the advice of a person who enjoyed "Interstellar" and "Prometheus". I watched the former, and absolutely loved every minute of it, so decided to watch the later. Big mistake. Prometheus is a corny, unrealistic, and childish film. The plot is boring, the acting bad, and even the design of the spacecraft looked ridiculous.

(My 14-year-old son laughed at my complaints, because he tried to warn me about how bad the movie was; he was right).

With sci-fi, I feel like it's hit or miss. This film is a total failure.
4 people found this helpful
See all reviews
Back to top
Get to Know Us
Make Money with Us
Amazon Payment Products
Let Us Help You
EnglishChoose a language for shopping. United StatesChoose a country/region for shopping.
© 1996-2021, Amazon.com, Inc. or its affiliates