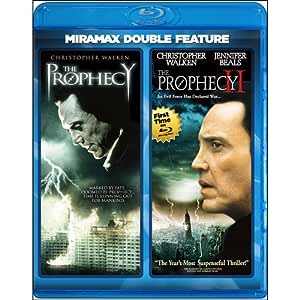 THE PROPHECY
At the scene of a bizarre murder, L.A. homicide detective Thomas Dagget discovers a lethal heavenly prophecy now being fulfilled on Earth. Yet in his fight to stop the forces of evil—led by the powerful angel Gabriel (Christopher Walken, Wedding Crashers)—Dagget finds an unlikely ally in elementary school teacher (Virginia Madsen, The Haunting in Connecticut). Together they race against time and terror to save the world as we know it.

THE PROPHECY II: GOD'S ARMY
Big-screen favorite Christopher Walken returns in a riveting performance as the menacing angel Gabriel. When the powers of good and evil again descend to Earth in a battle over mankind, the only hope for survival is the unborn child of an innocent woman (Jennifer Beals, The Book of Eli). With the help of a mysterious stranger, she races to protect her child and save all humanity...unless Gabriel catches her first.

Andrew Zindilis
4.0 out of 5 stars Well Worth It ..
Reviewed in the United States on July 3, 2014
Verified Purchase
Prophecy is a interesting film . It was filmed 1995, But Released in 1998. The casting of Christopher Walken made this film a semi hit .
This was directed by Gregory Widen the mind behind " Highlander " . Considering the low budget , the costuming of the Angels in what we now steampunk style , the Angels are wearing Frock coats and crouching on the edge of a chair gives a look of a bird wings due to draping of the rear of the frock coats . There is one particular scene where one of the Angels Simon played by Eric Stoltz is sitting on top of a chair back rest , he looked just a bird on branch . This show how a lower budget can give us more interesting scenes ,and narrative, As far second Film go's . It is direct to video and even a lower budget , But interesting . Ninety percent of the sequel is filmed at night which is effective cost cutting exercise , It is watchable, especially with Christopher Walken again as the Archangel Gabriel.

nancyA
3.0 out of 5 stars low quality blu-ray transfer
Reviewed in the United States on February 18, 2020
Verified Purchase
You buy blu-ray for higher quality video, right? This transfer is very grainy - irritatingly so, particularly the first movie.
I was able to clean it up quite a bit with Handbrake 1.3.1 - use Super HQ 1080p preset and then in the filters section, set Denoise: NLMeans, with Preset: strong and Tune: film.
If you are willing to go through the hassle, the result will be noticeably better than the original DVD release, but nothing great.
That said, enjoyable films - Christopher Walken is hilarious as the angel Gabriel.

MonsterZeroNJ
4.0 out of 5 stars Only two worth owning.
Reviewed in the United States on March 3, 2013
Verified Purchase
Nice looking blu-ray is bare bones but does feature the only two of this franchise worth owning. Gregory Widen writes and directs the first Prophecy, a clever and often very creepy horror flick concerning a second war in Heaven spilling out onto the Earth. Jealous over the attention God has given humankind, the Archangel Gabriel (Christopher Walken) has waged a war that has lasted centuries. But, if he can acquire the soul of a heinously evil human general who has recently died, it could turn the tide. But, loyal angel Samuel (Eric Stoltz) has hidden the soul in a little girl, Mary (Moriah Snyder) and now it's up to ex-priest turned cop, Thomas (Elias Koteas) and school teacher, Katherine (Virginia Madsen) to stop Gabriel from getting the soul from Mary. Complicating matters is a third party, Lucifer (Viggo Mortensen) who has an invested interest in how this situation plays out. Widen gives this film a nice atmosphere and creatively weaves Bible scripture into this very original and effective horror, as well as, gives some very good dialog for star Walken and Mortensen's Lucifer to chew on. He also has a nice visual style and makes good use of a small budget. He gets good performances from all the cast with Koteas really convincing as a man who has lost his faith now faced with defending the God he turned away from and Madsen making a strong willed heroine forced to stand against the unthinkable. Obviously, thought, it is Walken who takes his role and runs with it with his sinister and quirky performance as the vengeful Gabriel. But, not to be overlooked, is Viggo Mortensen giving one of the creepiest representations of Satan on film. His fallen angel is dripping with evil and malice and delivers Widen's dialog with an unsettling restraint that is a perfect contrast to Walken's more over the top Gabriel. A witty, original, unnerving and very entertaining horror. Direct to DVD sequel, Prophecy 2, actually isn't bad. Can't compare to the original but, it is entertaining. Story has Gabriel (Christopher Walken) continuing his war to take control of Heaven. A loyal angel, Danyael (Russell Wong) impregnates a human woman, Valerie (Jennifer Beals) to create a Nephilim, a human/angel hybrid who is prophesied to unite the angels and end the second war. Gabriel now must hunt down Valerie and destroy her unborn child before it can ruin his plans to take over Heaven.Greg Spence writes and directs this time and doesn't quite have the cleverness or style that Gregory Widen had but, he directs competently and gives the sequel a brisk pace and Walken is once again worth watching for his quirky and sinister Gabriel. The rest of the cast is fine with Beals giving a strong and sympathetic performance as a woman fighting supernatural odds to save her child and Russel Wong bringing a strong nobility to Danyael. Also staring Brittany Murphy as a suicidal girl Gabriel uses as his human familiar and Eric Roberts as the angel Michael. Not bad as direct to DVD sequels go. Fans of the original will probably be entertained.
Read more
One person found this helpful
Helpful
Comment Report abuse

Amazon Customer
5.0 out of 5 stars C. Walken
Reviewed in the United States on March 20, 2013
Verified Purchase
I love this actor. His character is so believable. His misfortunes and faith are all questioned until he realizes what really needs to be done. Thumbs up!
Read more
One person found this helpful
Helpful
Comment Report abuse

Gillian
5.0 out of 5 stars love
Reviewed in the United States on November 17, 2013
Verified Purchase
just love this series and it was time to buy my own dvds! great cast, potentially "dark" subject, but so much wit from walken's character.
Read more
Helpful
Comment Report abuse