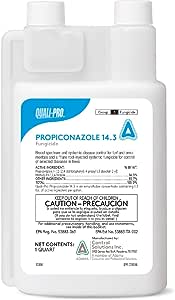 4.6 out of 5 stars
4.6 out of 5
275 global ratings
How are ratings calculated?
To calculate the overall star rating and percentage breakdown by star, we don’t use a simple average. Instead, our system considers things like how recent a review is and if the reviewer bought the item on Amazon. It also analyzes reviews to verify trustworthiness.

Cornelius Qualley
5.0 out of 5 stars Fixed my lawn!
Reviewed in the United States on August 28, 2018
Verified Purchase
So, my lawn typically looks like a golf course during the early months of the year, I have about 1/3 acre of grass total. Then, during the hot months I get some large brown patches in various areas. It seems to be really bad if I have something wet placed on the grass for a day or so (e.g. blow up slide for the kids). It may appear to be a lack of water, but I have a fully automated irrigation system for my front and back lawn, so water was never the issue. This year, my lawn was super green, then we had a super heavy couple of weeks of water followed by some 100 degree days, then the brown came out really strong (see photo). After attempting to water more (since it looked like a lack of water), the problem only got worse.

Finally, I did some research and found out about Propiconazole and brown patch (a new thing to me). I typically only use Milorganite for fertilizer, Ferti-lome for creeping charlie, and a pre-emergent in the spring. I decided to give this a shot to see if maybe there was a fungus problem, since it definitely matched my lawn's symptoms. I did the first treatment using the brand name stuff (at twice the cost) applying at a rate of 2oz/gal/1000 sq ft on the bad areas and 1oz on the less impacted areas. I saw some new grass growing in the brown spots after the first week or so. I bought this product the second time around and did the second application after 14 days (since this was early August, and a second treatment was recommended), and I saw really incredible results after a couple more weeks.

The pictures above are exactly one month apart, one in late July, the second in late August. There are still a few patches here and there to fill back in, but I think that's really because the grass basically died out from letting this go too long, and it'll still take a bit to come back. This is a great product if you have a fungus problem, just make sure you apply it to the entire area and watch that it's not too hot outside when using it.

Johnny Beans
5.0 out of 5 stars Good anti-fungal. Be careful using.
Reviewed in the United States on July 5, 2019
Verified Purchase
This is the stuff contained in many anti-fungals used on lawns. This is 14.3% compared to the Bayer product that is 2.7%.
Carefully dilute this in a sprayer and save money. Like all these chemicals don’t get it on you and keep kids and dogs off the grass until it dries. Lawns are expensive and it is worth it to take some prophylactic measures. I also use headway g in pellet form in addition to this. This is a backup when it’s really humid and hot. My lawn guy recommended this at 1.5 oz on an ortho hose end sprayer.

floflow72
5.0 out of 5 stars Fast ship and the same active ingredient as the Alamo brand
Reviewed in the United States on September 6, 2018
Verified Purchase
Ordered on a Sunday and on my porch by Thursday from the "DIY Pest Control" seller. Same fungicide as the Alamo brand which sells for twice as much for the quart size. Container is similar to the Alamo container where you can easily measure out the correct milliliters. For large oaks and oak wilt, don't even mess with chemjet injection syringes. 5 of them was about $70 and it would be way too hard to properly treat an oak I can't even wrap my arms around. You need one injection every 4-6 inches and best if done in the root flare(not the trunk). For smaller oaks I'd buy them. I found two sellers from a web search selling them for $12-13 each and less if multiples are bought. Best to go with a macro-infusion kit with the 75 injection tees for large size trees despite the cost. I hope this info helps someone losing their beautiful oaks.
Read more
7 people found this helpful
Helpful
Report abuse

Robert
5.0 out of 5 stars This works for Brown Patch and Dollar Spot
Reviewed in the United States on January 13, 2019
Verified Purchase
I purchased this to address fungus in my lawn, Indiana, blue grass, tall fescue, and perenial rye. This does the trick. You should apply as directed as soon as the temps climb above 70 on a steady basis. Repeat as directed.., and you should not have any issues with fungus or disease.
Read more
3 people found this helpful
Helpful
Report abuse

teach123
5.0 out of 5 stars Cheap and Effective Product
Reviewed in the United States on June 21, 2019
Verified Purchase
Midwest humidity can be brutal on my TTTF lawn because of brown patch. Had an outbreak last year due to dew points being in the mid-70's for weeks. I rotated this product with Heritage G, which is another class of fungicide, every two weeks to discourage resistance. I even combined both during a single application. Even in high humidity, my turf responded and lessened the impact of browning. This year, I began to spray at the preventive rate in May before the humidity sets in. We'll see if it is as good of a preventative as it was a curative. Highly recommend. Especially for the price!
Read more
One person found this helpful
Helpful
Report abuse

A. Muthiraparambath
5.0 out of 5 stars This stuff works !!
Reviewed in the United States on July 15, 2020
Verified Purchase
Applied this and in a week I see the grass turning green. Lot of grass already died, but I’m seeing regrow this. It should fill within a month or so. I have my next treatment as suggested in 3 weeks.
Posted before and after for your perusal.

Silver
5.0 out of 5 stars Jury is still out but because of the weather not the product.
Reviewed in the United States on July 21, 2017
Verified Purchase
We've had sooooo much rain here in Atlanta that I've not really been able to see if this works, but it's the weather and not the product. Getting ready to start trying it again if it stays dry long enough!!!
Read more
4 people found this helpful
Helpful
Report abuse
See all reviews