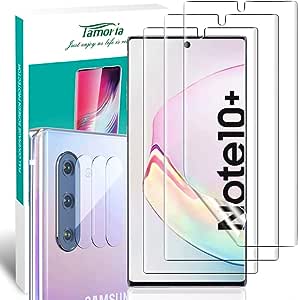 4.0 out of 5 stars
4 out of 5
154 global ratings
How are ratings calculated?
To calculate the overall star rating and percentage breakdown by star, we don’t use a simple average. Instead, our system considers things like how recent a review is and if the reviewer bought the item on Amazon. It also analyzes reviews to verify trustworthiness.

Joh
5.0 out of 5 stars Great quality and super easy to apply!
Reviewed in the United States on September 27, 2019
Verified Purchase
After i installed, which was an easy process. Just make sure the kids are not around and it should be an easy install. The camera lens protector looks of high quality material, which i know it will protect whats most important. The lens stays in place and pictures aren’t any different than prior to installing the camera lens protector. I'm very satisfied!
Read more
75 people found this helpful
Helpful
Comment Report abuse

Kimberly
4.0 out of 5 stars So far, so good
Reviewed in the United States on September 9, 2019
Verified Purchase
This protector was easy to install and looks to be exactly what I needed. Will update review if my opinion changes but for now, I'm very satisfied.
Read more

Attila the Pun
1.0 out of 5 stars Not glass, barely a sticker
Reviewed in the United States on November 17, 2019
Verified Purchase
This is NOT glass! It's a flexible polymer sticker with a weak adhesive that fell off immediately. Do not fall for this scam.
Read more
4 people found this helpful
Helpful
Comment Report abuse

Tony K.
1.0 out of 5 stars Bad lint issue, and only 3 films in my box, not 6 and no installation Video
Reviewed in the United States on June 19, 2020
Verified Purchase
1st of all there were only 3 screen protectors, not 6, so thats bogus, and then if you so much as let the 1st section of the side that goes down, that's permanent be exposed for more than a few seconds, which is hard to do, it seems to just suck in dirt and lint, because my 1st 2 applications went belly up, when after it was on, I couldn't understand why I had a lint line where the separate halves of the disposable part of the screen protector come together, so I removed it and did a much better job, and Still that same damn Lint Line, so then I put on disposable vinyl gloves, and covered my work space with plastic and installed the 3rd and final screen protector with my hands being gloved, and underneath the plastic, and that went much better because I cut down on the possibility of lint or as much lint contaminating the screen surface, and yes i still had some lint trapped underneath the film protecting the glass but not near as much, application of the SP's is about as easy as they come, but i had to figure that part out on my own because the only video I found for these SP's were from another Manufacturer, not Tamoria, and i did exhaustive searches, and the website doesn't give the consumer any installation instructions AT ALL.
I'm pleased with ease of application, and how nice they look and work if you can manage to install correctly, but as far as Anything else, 👎

Linda Doeden
5.0 out of 5 stars Easy installation
Reviewed in the United States on June 23, 2020
Verified Purchase
UPDATE: I originally said that there were no marks from the Note 10+ stylus when taking on screen notes, but after some intensive note taking the other day there are marks on the screen protector film. Removing one star. Still a great screen and camera protector and is super easy to install.After trying to install a *different*, more expensive, screen protector film and failing miserably due to poor instructions and design, I decided to get this one. I'm very glad I did. The other reviewers are right, this is super easy to install. The overall design with the alignment mount is the key. Very well thought out. You will get it perfectly straight and centered. I did not have any bubbles. There is a QR code link in the little user manual that takes you to a youtube video showing the exact steps you need to do. Just watch the video through one time and then rewind and follow the steps. You cannot go wrong with this. As for protection, it seems to be just fine. I have a note 10+ and did not notice any markings from the stylus when writing on the screen. Its not as smooth as the actual glass screen (not sure thats even possible with a film protector) but its got an ok feel when swiping through screens. Highly recommend.
Read more
Helpful
Comment Report abuse

Melanie
5.0 out of 5 stars Works Well
Reviewed in the United States on June 22, 2020
Verified Purchase
I bought this back in June as a backup screen protector and camera protector. The one that came with the phone was really good. The original started getting some scratches and it was looking bad. So I finally got around to putting this on. It took me a minute to figure it out so please watch the video. You might get a little confused if you don't watch the installation video. After getting it on, you might see many bubbles. Don't worry, use the scraper. It works really well. I managed to get all of the bubbles out. The screen protector seems to be case friendly. The feel of the screen protector takes a little getting used to. No problems with touch sensitivity. The S-Pen works fine. Keep in mind that this is not a glass screen protector. Over all I think most people will like this screen protector and camera protector.
Read more
Helpful
Comment Report abuse

Mike Cohen
5.0 out of 5 stars Fast, easy and looks greatFast, easy and looks great
Reviewed in the United States on June 22, 2020
Verified Purchase
Extremely easy to put on. What they don't really show in the pictures is that it comes with these extra things to get it lined up perfectly and help you keep it from moving around as you're putting it on.I do recommend reading all the instructions pitcure first so it goes faster, rather than just reading as you go. It's really simple either way.Fingerprint reader works perfectly, no issues with touch sensitivity, it's crystal clear and you can't tell I have a screen protector on.My only critique is that the wet cloth and dry cloth left an oily looking residue on the screen when I cleaned it after taking my old protector off. However, I used a nice cleaning cloth for my glasses and that took care of it quickly. If I have any issues with it going forward I'll update my review.So far I love it.
Read more
Helpful
Comment Report abuse

Mike
5.0 out of 5 stars Best I've ever had
Reviewed in the United States on June 22, 2020
Verified Purchase
I have had my share through the years with screen protectors and this by far is the most easiest and clearest to put on. At first when I seen everything that came in the box I was thinking what the heck but, I was the easiest and most productive film. It went on extreamly even and straight, the directions were extreamly easy to follow. I will be ordering this brand again in the future.This is a film not glass, my fingers dont slip and slide all over, it picks up on my taps on the screan as if nothing were on it, it also is extremely clear. I feel I can see my screan better with it on.This product will always be recommended from me if you are looking for a film
Read more
Helpful
Comment Report abuse
See all reviews