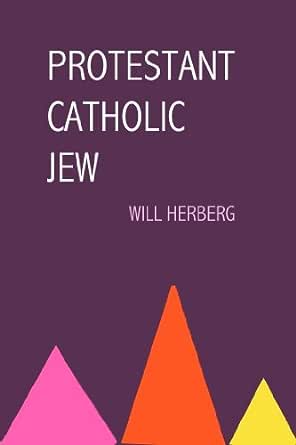 Will Herberg was graduate professor of Judaic studies and social philosophy at Drew University. His other books include Judaism and Modern Man, The Writings of Martin Buber, and Four Existentialist Theologians.
--This text refers to an alternate kindle_edition edition.

Protestant-Catholic-Jew....spoke precisely to the mid century condition and speaks in still applicable ways to the American condition and, at its best, the human condition.' -Martin E. Marty --This text refers to an alternate kindle_edition edition.

JRS
4.0 out of 5 stars a 50's era classic
Reviewed in the United States on October 6, 2012
Verified Purchase
This is one of those books I was supposed to read in college but didn't. I should have, and not just so I could look an old professor in the eye, should we be assigned to the same section of the hereafter. Some of what Herberg has to say, especially about the sociology of American Judaism, is very dated now, and yet his central ideas about American religion are as true now as then, despite Vatican II and a major shift in the numbers and social positioning of Protestant "denominations". In very brief, his point is that mainstream Americans have faith in Faith, or maybe in something called the American Way of Life, not in God--that is, not the God of either Judaism or the main stream of European/Middle Eastern Christianity. He makes a strong sociological case for his point, too. And he would admit that there are certainly Jews, Protestants, and Catholics of whom this is not true. I think he is weak about thinking through the spiritual consequence of that shift, but he is a sociologist, not a theologian. So, is the book worth reading after all these years? Well, if my short summary upsets or surprises you, then very much YES. All the more since the claims of the American Way of Life to be a proper object of faith seem so much more problematic now than they did is his day.
Read more
3 people found this helpful
Helpful
Report abuse

Mark Koerner
5.0 out of 5 stars We Live on Uncle Sam's Stove!
Reviewed in the United States on August 3, 2001
Originally published in 1955, PROTESTANT-CATHOLIC-JEW is still worth reading and still significant. It is a good deal more than a tour of America's religions; it is a book about what it means to be an American. Herberg got a few things wrong, and a good deal has happened since 1955, but he was a wise man who was close to the mark on several important issues.//Briefly, Herberg argues that, contrary to Israel Zangwill and other theorists of a single assimilating melting pot, the United States has three melting pots: a Protestant melting pot, a Catholic melting pot, and a Jewish melting pot. According to Herberg, each subsequent generation of Americans considers itself less and less "ethnic." But as ethnic consciousness declines, religion becomes more important, so any intermarriage among different ethnic groups stays within the same religious denominations. For example, third-generation Polish-Americans (almost invariably Catholic) don't marry other Polish-Americans, but they do choose Catholic spouses. Their children become Catholic Americans, and part of the Catholic melting pot. // Herberg claims that the three melting pots are so important that there are now three fundamental ways of being an American. One can be a Protestant American, a Catholic American, or a Jewish American. The only exception Herberg makes is for the members of the Eastern Orthodox Church, whose intellectuals confuse everyone by insisting on Four Great Faiths rather than Three.//Herberg admits that the triple melting pot thesis has certain flaws. Specifically, he regards African Americans as a permanent outcast group that will likely never become part of the larger Protestant melting pot. (He says nothing about black Catholics and black Jews.) He also acknowledges the existence of a few members of various Eastern religious sects, but he clearly considers such people too marginal to think very hard about.//Within a few years of the publication of PROTESTANT-CATHOLIC-JEW, the whole idea of the melting pot--even a triple one--became unfashionable. Eminent scholars and politicians told us about "unmeltable ethnics." At the same time, religious intermarriage has become more common, making one wonder if the triple melting pot thesis is still valid. And, since the Immigration Reform Act of 1965, large numbers of Asians have moved to the United States, creating the outlines of a nation with Five Great Faiths: Christian, Jewish, Moslem, Buddhist, and Hindu. Unfortunately, Herberg himself is no longer around to interpret these trends, so we'll just have to sit here and cook for awhile.
Read more
23 people found this helpful
Helpful
Report abuse

John R. Mitchell
5.0 out of 5 stars Classic on American religious development
Reviewed in the United States on February 8, 2000
Herberg brilliantly analyzes, with both insight and feeling, the development of the American religious landscape. We owe much of our cultural and religious identity to the waves of immigration that came to our shores and the particular ways in which these newcomers were assimilated to the American way. Our situation has changed somewhat since Heberg's work in 1960, but his careful, lucid, and detailed explanation of who we are is still highly worth reading. I warmly recommend it to my students.
Read more
8 people found this helpful
Helpful
Report abuse
See all reviews