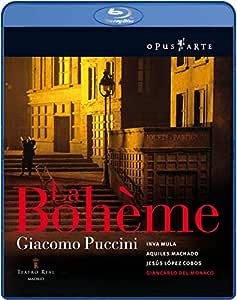 Add to Cart
$39.99
& FREE Shipping on eligible orders. Details
Sold by: Amazon.com
Have one to sell?
Sell on Amazon

It seems hard to believe that even during the last century Puccini was greatly underrated by many as a classical composer and indeed his music was considered to be far too melodic. Fortunately today, Puccini's operas have found their rightful place in the repertoires of all the leading Opera companies around the world.

This production of La Bohème remains true to the period and the libretto of the original score. The director of music, Jesús López Cobos, is to be congratulated for not making changes for changes sake. The cinematic technique employed, particularly for close ups, brings the viewers into the story almost as participants whilst at the same time the opera is clearly being performed on stage as one would expect.

Inva Mula and Aquiles Machado give masterful performances as Mimi and Rodolfo, as do Laura Giordano, Fabio Maria Capitanucci and, indeed, the rest of the cast, bringing the characters to life and doing full justice to Puccini's magnificent score.

A well known anecdote has it that the late King George V, when talking to Sir Thomas Beecham, remarked that La Bohème was his favourite opera as it was the shortest one he knew of. It is not, of course, the shortest opera but the quality of the music with its wonderful arias certainly makes the time pass all too quickly.

Top 2008 Classics List: Possibly the world doesn't need a new go-around of Puccini's eye-moistener, but this one really gets to you, a performance of cinematic realism in Madrid's Teatro Real staged by Giancarlo del Monaco, led by Jesus Lopez-Cobos. Inva Mula and Aquiles Machado are the lovers, and the surround miking sets their tragedy up close and personal; resistance is futile. -- Bloomberg.com, Alan Rich, December 2008

Visually, the high-definition picture communicates the highly contrasted lighting of the production. The cold light of act I really does feel like late afternoon on December 24th. The sets are extravagantly decorated, and there's more stage business than you can possibly take in the first time around--jugglers and acrobats at the Café Momus--yet the design doesn't seem bloated or ostentatious, as some of Franco Zeffirelli's Met productions can. . .For the opera videophile who has taken the plunge with Blu-ray, this release is an obvious early acquisition. -- Fanfare Magazine, Andrew Quint, January/February 2009