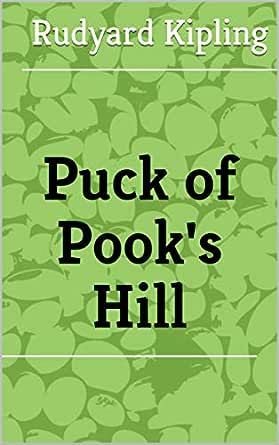 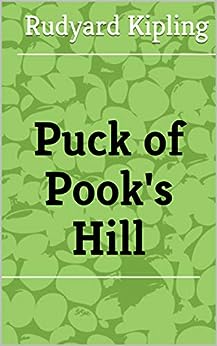 "Narrator Peter Kenny's varied British accents are wonderful; a few, however, as authentic as they are, may strain some American ears. But the narration shifts easily between the stories and the poems in this collection. Some listeners may take offense at the anti-Semitic undertones in a poem and story near the end, but Kenny makes clear Kipling's ringing endorsement of (eventual) freedom for all Britons."

-- "AudioFile " --This text refers to an alternate kindle_edition edition.

The hidden history of Old England, lovingly written by Kipling for his own children, is coupled with a brilliant reading to make this one of the premier family listening events of the year. The story has everything listeners could want: enchantment, high adventure, battles, intrigue, all wrapped up in romantic poetic language. Through pitch and pacing alone, Nadia May conveys not only the distinct voices of the children, Dan and Una, but also those of the impish Puck and a host of characters who tell the story of those who lived near Pook's Hill. In true turn-of-the-century fashion, the book isn't the least bit politically correct, but Kipling's language fairly glows and, after all, how could he know about modern-day sensibilities? Allow yourself to succumb to the magical tale, awakened by Dan and Una on Midsummer's Eve and brought exquisitely to life by Nadia May. S.G. An AUDIOFILE Earphones Award winner (c)AudioFile, Portland, Maine --This text refers to an alternate kindle_edition edition.

Rudyard Kipling (1865-1936) was born of English parents in Bombay, India. At seventeen, he began work as a journalist and over the next seven years established an international reputation with his stories and verses of Indian and army life, including such classics as The Jungle Book and Kim. In 1907 he became the first English writer to receive the Nobel Prize. --This text refers to an alternate kindle_edition edition.

Puck of Pook's Hill and Rewards and Fairies are classic children's books which speak powerfully to adult readers. Una and Dan, performing a scene from A Midsummer Night's Dream one Midsummer's Eve, accidentally summon Puck to a fairy ring near their Sussex home. Through Puck the children are witnesses to tales of English history, subtly called forth by Kipling's brilliant and fluid adventure writing. Kipling's historical imagination extends to a wide variety of stories, many of which blend the ghostly and the familiar, and often anticipate his later writing in their themes: a sense of loss and breakdown, but also healing. First published in magazines between 1906 and 1910, the stories were accompanied by some of Kipling's most famous poems, including 'If-' and 'The Way through the Woods'. This edition includes an introduction which dispels the myth that these stories are simply a nostalgic view of English history, discusses their relationship to other historical fiction, and relates them to Kipling's earlier and later writings. --This text refers to an alternate kindle_edition edition.
Read more

4.3 out of 5 stars
4.3 out of 5
88 global ratings
How are ratings calculated?
To calculate the overall star rating and percentage breakdown by star, we don’t use a simple average. Instead, our system considers things like how recent a review is and if the reviewer bought the item on Amazon. It also analyzes reviews to verify trustworthiness.
Top reviews

The British have a wonderful tradition of excellent adult authors writing fantasy children's books that are also fun reads for adults. J.K. Rowling's "Harry Potter", C.S. Lewis' "Alice in Wonderland" and "Chronicles of Narnia", and J. M. Barrie's "Peter Pan" all spring to mind. Even J.R.R. Tolkien's "Hobbit" and "Lord of the Rings" were YA accessible and appropriate. But who would have thought Rudyard Kipling falls into this category?

The book Puck of Pook's Hill follows two children, Dan and his sister Una, as they spend an enchanted summer in the English countryside. When they perform Shakespeare's "Midsummer Night's Dream" under the oldest hill in England three times in a row on Midsummer's Eve, who should appear, but the magical faun Puck.

In a series of short episodes, Puck introduces Dan and Una to various characters from England's history, including a Roman legionnaire, a Nobleman, a money-lender, a blacksmith, and one of the old pre-Christian pagan Gods -- Weyland. The story-telling is masterful, the writing lyrical, and the plot moves along quite quickly. The story is interspersed with lots of poems by Kipling, who was, after all, a master poet. Puck is the type of book you can read out loud to your children in the evening, and they won't get bored. Each chapter is just the right length for a bedtime story. Or, you can keep it all to yourself and savor every last word of it. The only problem with reading it to your children is that they will ask you millions of questions about it. There are some historical references that non-British readers may not understand, for which I would recommend the reference list at [...]

Puck of Pook's Hill was first published in 1906, and is available for free on Amazon and other on-line sites.

A Noren
2.0 out of 5 stars Poorly formatted
Reviewed in the United States on September 9, 2020
Verified Purchase
The entire book is printed with each line centered. It's really difficult to read in this format, as at the start of every line your eyes have to search for where to start reading. It's a distraction, and I'll be purchasing an alternate copy to actually READ the darn stories.
Read more
Helpful
Comment Report abuse

Chelsea Van Kesteren
2.0 out of 5 stars Slow slow slow
Reviewed in the United States on October 15, 2018
Verified Purchase
This book had no main over- arching plot and the chapter stories were mostly uninteresting. The main characters never grow and we don't even really get to know them at all.
Read more
Helpful
Comment Report abuse

J. GrayTop Contributor: Makeup
5.0 out of 5 stars Very entertaining
Reviewed in the United States on April 21, 2015
Verified Purchase
I'm surprused this book isn't better known. It's a charming tale of the stories told by an elf to two children.

I was surprised, upon reading it, to see the plot-lines of many, many "Prince Valiant" comics from my childhood. Obviously, hal Foster had read "Puck of Pooks Hill!"
Read more
3 people found this helpful
Helpful
Comment Report abuse

Tricia M
5.0 out of 5 stars One of the lesser known works of Kipling, but well worth reading
Reviewed in the United States on September 23, 2014
Verified Purchase
Rudyard Kipling. Puck, Roman soldiers guarding the Wall, medieval lords fighting and having adventures, The Wild Hunt. This was written for children, but I still enjoy it. I have an old bound copy, but it was good to see this book offered for Kindle.
Read more
2 people found this helpful
Helpful
Comment Report abuse

P.Sinclair
5.0 out of 5 stars A childrens' book of it's time
Reviewed in the United States on September 22, 2014
Verified Purchase
I liked this because of it's locality, I lived just by Pooks Hill at the top of Willingford Lane and not far from Kipling's own house. I also enjoyed the historical story of events around the area, and the characters, A childrens' book of it's time.
Read more
One person found this helpful
Helpful
Comment Report abuse

Robert J. Hawkins
4.0 out of 5 stars A simple, delightful pleasure -- suitable for adults
Reviewed in the United States on December 30, 2014
Verified Purchase
What a surprising delight. Kipling slyly unfolds the history of England (well, the juicy parts) from Roman soldiers at the wall, to Knights of old, Pirates, smugglers, to the Magna Charta. The woodland imp Puck orchestrates these tales to the amusement and awe of two young children. This is called a book of children's tales but no more so than Harry Potter or Lord of the Rings.
Read more
Helpful
Comment Report abuse
See all reviews

Believing Thomas
4.0 out of 5 stars Still fresh but beware some genuine political incorrectness
Reviewed in the United Kingdom on November 15, 2013
Verified Purchase
I like Kipling. He writes in quite a fresh style, keeps things moving and does not use words for he sake of it, despite writing around 100 years ago.
This book, intended I guess for children, is really a kind of historical novel about a place in the south of England, hung on the idea of an ancient 'fairy' that introduces the story windows.
The only thing that modern readers may well stumble over is a curious story about the influence of Jews in the reign of King John. It reflects the ideas of some people in Kipling's time that the Jews somehow controlled the power of the nations through gold. An idea that has lead to some terrible persecution. It is interesting to hear what he says but maybe not an idea you want to impart to your children.
Read more
13 people found this helpful
Report abuse

Anne Savage
5.0 out of 5 stars Go, Fairies!
Reviewed in the United Kingdom on June 23, 2013
Verified Purchase
I first read this book as a child and I'm sure it's inspired a lot of my own writing.

Despite Kipling's Victorian attitudes, it's still a book full of magic and interest and is based in part on many of the old British folk tales and mythology that so many people have now forgotten.
Read more
One person found this helpful
Report abuse

Thermaloy
5.0 out of 5 stars Suspend your disbelief and be a child again
Reviewed in the United Kingdom on January 16, 2015
Verified Purchase
A spice of magic woven into a tale for children - delicious book, a long-term favourite, as is most of Kipling's work for me.
Read more
2 people found this helpful
Report abuse