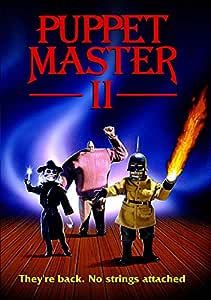 Pin Head, Blade and the rest of the puppets are back with a new one, the flame-throwing Torch.

4.6 out of 5 stars
4.6 out of 5
69 customer ratings
How does Amazon calculate star ratings?
Amazon calculates a product’s star ratings based on a machine learned model instead of a raw data average. The model takes into account factors including the age of a rating, whether the ratings are from verified purchasers, and factors that establish reviewer trustworthiness.

Sean Wandersee
5.0 out of 5 stars They Say Satan’s Got a Suite of Rooms in There!
Reviewed in the United States on May 16, 2020
Verified Purchase
After the events of the previous film a group of paranormal investigators show up at the Bodega Bay Hotel also called Scarab Hill to do some investigating. It must be impossible to get insurance if you list Paranormal Investigator on the form. You’d envy fruit flies for their life expectancy. After one goes missing and another gets a new hole bored into his skull the survivors start the most chill investigation with the missing psychics son who rides a motorcycle but looks like he sells retirees condos in Boca Raton. They meet up with the mysterious and heavily bandaged Eriquee Chanee, who clearly is guilty of stealing excess ‘e’s for his name who claims to own the hotel of puppet death. He has a diabolical plan that requires brain tissue to transfer his disfigured body into a life size puppet that looks like a cross between Howdy Doody and a Real Doll and then force the lead paranormal investigator, who just so happens to be the exact duplicate of his long dead wife, into her own horror show puppet body so they can live happily ever after because why not. Makes you wonder if you get into paranormal research because you are the doppelganger of someone who resembles the love one of some mad deathless kook or just really unlucky at the career counselor at school.

What starts off as a bog standard direct to video horror sequel with everybody being incredibly chill with mysterious disappearances and hideous puppet murders goes totally bonkers in the last ten minutes with the most horrifying monsters in film history. You are a puppet master, it says so in the title and the best you can create is a Peter Lorre Blow Up Doll to live your eternal life in? I mean the invisible man cosplay you spend most of the movie dresses as at least gives you an air of mystery and suspense to how hideous you look under the wrappings but wooden bug eyed horror isn’t a step up from human beef jerky it is several steps down. Another big plus is the addition of Torch, the meanest barbeque lighter in film history. You are here for the puppets and to watch them do their hideous stuff and for low budget direct to video they look incredible with real workmanship to them. You come for puppet mayhem you stay for hideous life size puppets who plan to steal your soul.

Jimmy
5.0 out of 5 stars I loved it. My Dad recently told me that every ...
Reviewed in the United States on October 8, 2017
Verified Purchase
I absolutely adore these movies. I've been watching since I was a toddler. My parents said they took me to the video store and I walked right over to this box and grabbed it off the shelf and begged to watch it. My parents explained to me that it's just a movie and all that and prepped me for my first horror movie, and I just ate it up. I loved it.

My Dad recently told me that every time we'd go into the video store I'd just point and go, "Puppet Masher Masher!!"

G
4.0 out of 5 stars Best 1
Reviewed in the United States on April 25, 2018
Verified Purchase
best puppet master to me, improves on 1st but still feels like a real movie, doesn't have much Nazi stuff which many of these series does , which I feel was always unneeded
Read more
Helpful
Comment Report abuse

Juan Diego Guzman
5.0 out of 5 stars Torcher!
Reviewed in the United States on August 7, 2018
Verified Purchase
I love this movie because of it's animated puppets and the same vibe you get from the first movie. Torcher is my favorite in this movie I'm intreged by his ability.
Read more

Daniel Fouts
5.0 out of 5 stars full moon love!
Reviewed in the United States on April 30, 2013
Verified Purchase
the first 3 puppet masters are required viewing for any horror buff out there ..david allen continues his mastery of stop motion mayhem with these puppets and takes the helm as director really taking the first films strengths and expanding on them..the picture quality is off the charts while the audio is only serviceable! the ending is hilarious and creepy ! i love full moon productions especially from this era!!
Read more
One person found this helpful
Helpful
Comment Report abuse

Amazon Customer
4.0 out of 5 stars Get the Full Moon disc, Echo Bridge sucks!
Reviewed in the United States on June 16, 2017
Verified Purchase
Get this remastered release only, the Echo bridge release is a piece of crap and a rip off, the picture is defective at the very end and that is atrocious quality control. This also has all the features and the videozone, it feels complete! Thank you Full Moon for releasing these in a proper DVD/Blu Ray format! Echo Bridge is ass and should go bankrupt.
Read more
Helpful
Comment Report abuse

Cward55
4.0 out of 5 stars Love this movie so much.
Reviewed in the United States on April 9, 2013
Verified Purchase
This movie is an amazing sequel to the first one and finally it's on Blu-ray and man does it look great. If your a fan of the series and you already have the movies then I say it's time for an upgrade to blu-ray. Everything about this product is great except for one thing. The sound quality is very jacked up at times and I really don't know why. I was looking around and was trying to find an explantion to this and from what I could get out of it was that the sound problems you hear is because of sounds that you couldn't hear before in the dvds and VHS versions and it's just a upgraded sound. I find it to be very distracting at times and started not to like this release at all. But now thinking about it, I love this movie, it's on blu-ray and looks fantastic, and this is probably the best version of this out there and the best we will probably ever get. The sound issues are very annoying but compared to the whole package it's an issue I can look past now. If you can get past some sound quality issues then you should buy this for sure.
Read more
3 people found this helpful
Helpful
Comment Report abuse

COBRA COMMANDER
5.0 out of 5 stars Cool
Reviewed in the United States on May 1, 2020
Verified Purchase
A classic movie 🎥
Read more
Helpful
Comment Report abuse
See all reviews from the United States

Gerald Reek
4.0 out of 5 stars STRINGING YOU ALONG
Reviewed in the United Kingdom on September 15, 2007
Verified Purchase
I notice some reviewers preferred this second instalment to the original, but I think the first still had more "interesting bits".

Puppet Master two, although a good stand alone film, isn't quite as gory as PM1. The emphasis is on "Torch" the new doll, a flamethrower. I prefer to see the one with the drill on his head in action, or the one that wields knives.
Flames don't do a lot for me!

Picture quality good, although there is some hiss on the soundtrack...this maybe because it's a cheaper independent film, or maybe the sound of the sea!?
Read more
Helpful
Sending feedback...
Thank you for your feedback.
Sorry, we failed to record your vote. Please try again
Report abuse

roy beech r.beech
4.0 out of 5 stars Puppet master 2.
Reviewed in the United Kingdom on March 29, 2017
Verified Purchase
A good follow up to the original, full of action.
Read more
Helpful
Sending feedback...
Thank you for your feedback.
Sorry, we failed to record your vote. Please try again
Report abuse

bill
5.0 out of 5 stars Five Stars
Reviewed in the United Kingdom on December 31, 2014
Verified Purchase
thanks
Read more
Helpful
Sending feedback...
Thank you for your feedback.
Sorry, we failed to record your vote. Please try again
Report abuse