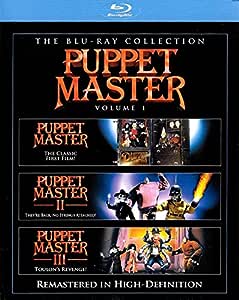 PUPPET MASTER 2: Toulon's army of assassin puppets exhume their beloved creator to gather the brain matter that keeps them alive, but the Puppet Master has a deadly plan of his own.

PUPPET MASTER 3: TOULON'S REVENGE: After Toulon escapes a kidnapping attempt that killed his wife, he exacts revenge with Six Shooter, Blade and Leech Woman, a new army of mini-murderers.

4.3 out of 5 stars
4.3 out of 5
34 customer ratings
How does Amazon calculate star ratings?
Amazon calculates a product’s star ratings based on a machine learned model instead of a raw data average. The model takes into account factors including the age of a rating, whether the ratings are from verified purchasers, and factors that establish reviewer trustworthiness.
Top reviews

herojeff
5.0 out of 5 stars A Must Own for Any Fan of the Series
Reviewed in the United States on July 9, 2013
Verified Purchase
I won't spend time reviewing each film, but rather the quality of the blu rays themselves. Full Moon has done it's fans a great service by finally releasing these on Blu Ray. The first 3 films are really classics in the genre and this is the first time we're getting to see them in their intended form. These films were first released on VHS in the late 80's/early 90's before widescreen presentations were common place in the home video market. We were forced to see full frame versions. Those transfers carried over to DVDs. If you were unlucky enough to pick up any dvd releases from Echo Bridge Entertainment of the first 6 films on DVD, you saw some pretty awful transfers. Now we are treated to beautiful 1.85:1 transfers with brand new color timing that makes the films look brand new. The only issues would be that there is some banding in the blacks every once in awhile and the menu volume is louder than the feature volume. To be clear, the feature volume is perfectly fine, it's the menus that are cartoonishly loud. Each disc includes the original Videozone from back in the day, as well. If you're a fan of the series, or just a fan of indie horror, this is a must own.
Read more
10 people found this helpful
Helpful
Comment Report abuse

BecauseIWasBored
3.0 out of 5 stars Check your brain in and enjoy
Reviewed in the United States on May 11, 2019
Verified Purchase
I'm usually the kind of guy who likes "thinking man" movies, but that doesn't stop me from enjoying something ludicrous and silly once in a while. It's a series about living killer puppets running rampant, you're going to get what you pay for.
Also it's probably a good idea to have a passing familiarity with Full Moon entertainment, a movie development company who's primary business strategy is the production of low-budget films meant to be released directly to shelves, skipping the theatrical release altogether.
So what you get is a series of movies with low production value, akin to a TV movie, with hammy acting, melodramatic plots, and pointless late 80's/early 90's nudity. But if you're looking into buying this series then it's likely that you don't care about that stuff, you just want to see the puppets kill people. And Puppet Master won't disappoint in that regard.
The creature designs on the puppets themselves is in my opinion the highlight of the trilogy, each one is distinct in it's aesthetic and helps impress upon the viewer each one's individuality. My only criticism on that point is the "Jester" puppet, who basically does nothing except make faces while the other, more interesting puppets do all the gruesome work.
There are also some few and far-between instances of astounding stop-motion animation, done by the late and legendary David Allen, which is fluid and lifelike. While I understand the intentional low-budget nature of the films limits the amount of time that could be spent on animation, I still wish that there were more scenes of the puppets moving under Allen's spectacular motions.
I'm not going to go into details about the drawbacks of the movies, which are plenty, because I'd be here all day and if you really get down to it, they don't matter. Like I said, if you want to watch the puppets kill people, you'll get your money's worth.
Going into some minor details about the individual films: The first one is in my opinion the weakest of the set, it's got the most forgettable set-up and some of the characters are just irritating to sit through. The second one is an improvement with the addition of the flamethrower-wielding "Torch", who's got the most metal design out of all of them, as well as an enjoyably hammy antagonist who feels like he's trying so hilariously hard to hold himself back from chewing the scenery. The third is easily the best in the trilogy, it's got a more streamlined story that's more satisfying than the other two, but when held under scrutiny has the most discrepancies in terms of established timeline.
The Puppet Master trilogy is an acquired taste. I didn't have the luxury of seeing these movies when I was a kid so I'm not blinded by any type of nostalgia, so I'm not writing this review with that particular audience in mind. I'm aiming this review at the curious types who've stumbled upon the Puppet Master franchise like myself. If you don't mind low-budget direct to video movies with atrocious production value but wonderfully enjoyable B-movie setups, then I give this box set a sincere recommendation.

Tim Bollack
5.0 out of 5 stars and the first 3 are still the best hands down
Reviewed in the United States on May 3, 2015
Verified Purchase
I won't review the individual films. If you know Full Moon and The Puppet Master series at all then you know you're in for B grade awesomeness, and the first 3 are still the best hands down. This bluray set is fantastic at an affordable price. If you've been disappointed with the terrible VHS and Laserdisc dvd transfers, then it is now time to rejoice. Full Moon's new remastered bluray renditions are exactly what you've been looking for. This is the best I've ever seen Puppet Master look and I couldn't be more pleased.
Read more
3 people found this helpful
Helpful
Comment Report abuse

Angof
5.0 out of 5 stars Great films in widescreen HD, whats not to like!
Reviewed in the United Kingdom on November 16, 2014
Verified Purchase
Puppet master in widescreen and remastered. Just awesome.
Read more
Helpful
Sending feedback...
Thank you for your feedback.
Sorry, we failed to record your vote. Please try again
Report abuse