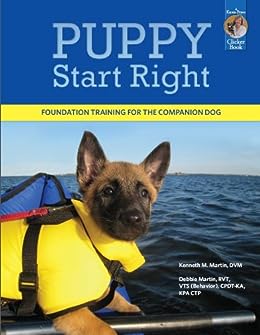 4.7 out of 5 stars
4.7 out of 5
95 global ratings
How are ratings calculated?
To calculate the overall star rating and percentage breakdown by star, we don’t use a simple average. Instead, our system considers things like how recent a review is and if the reviewer bought the item on Amazon. It also analyzes reviews to verify trustworthiness.
Top reviews

Fussy
5.0 out of 5 stars Read it!
Reviewed in the United States on July 13, 2020
Verified Purchase
I was recommended this book when I got my new puppy....I am so thankful it has been wonderful.
A true basis to understanding and training your dog.
Couple this with Zak George and it's a winning training program.
Read more
Helpful
Report abuse

Susan Signor
5.0 out of 5 stars Clearly presents instructions for teaching essential companion dog skills. Problem solving and preventions are invaluable.
Reviewed in the United States on June 16, 2018
Verified Purchase
This book contains all the essential information for anyone who wants to teach their puppy, or adult dog, essential skills. It contains an excellent chapter on Problem Behaviors and Preventions that are especially useful for young dogs/puppies. The text is understandable and concise. I provide a copy of this book to each of my puppy owner students.
Read more
One person found this helpful
Helpful
Report abuse

Annamarie Hessman
5.0 out of 5 stars Clear and concise
Reviewed in the United States on September 2, 2019
Verified Purchase
This is a generally excellent puppy book without a lot of outdated mythology found in others and with clear outlines of force-free, fear-free methods of getting a puppy off on the best paw. There are many topics that certainly could benefit from more detail to help a novice learner, but the most salient information is comprehensively addressed.
Read more
Helpful
Report abuse

Rachel
4.0 out of 5 stars Kind of obvious
Reviewed in the United States on February 3, 2013
Verified Purchase
For me alot of the stuff in here is kind of obvious but good reminders. I understand the issues with housetraining and cratetraining but this book somewhat lacks advice when you have trouble. It just tells you be consistent and perhaps seek the advice of a vet or trainer.

I do like the way it's laid out, it's easy to jump around to what I want to find. The pictures are helpful but a tad redundant. Overall an easy read with lots of helpful stuff.
Read more
8 people found this helpful
Helpful
Report abuse

dookerJ
5.0 out of 5 stars Outright the best puppy book out there.
Reviewed in the United States on July 9, 2012
Verified Purchase
About six months ago I got my first dog (other than those I'd had during childhood, who'd been taken care of mostly by my parents). He is an Australian Shepherd; a highly intelligent but sometimes challenging breed.

I read several books beforehand, including Caesar Milan's puppy book, and the one by those monks. I've been a big fan of Caesar's TV show, and after having seen a million episodes, figured I'd be a real pro whenever I finally got a dog. Boy, was I wrong.

First of all, raising a puppy is more challenging than anyone can possibly imagine, if it's one's first time. But also, I quickly found that while a lot of what Caesar says is rooted in sound enough "dog psychology", the whole "pack" mentality and dominance thing is a bit off the mark. For example, the show often teaches when a seriously misbehaving dog is out of control, to hold him on his back. This really isn't such a great idea for a puppy... They lack the capacity to understand just what that means.

So, anyway, Caesar's book, and several others I read (including a few small e-books found on Amazon) were too general-too abstract. They sound good in theory, but they don't really leave you with useful, explicit tools and methodologies. They leave you more with a handful of obvious tips and some philosophy. That's great, too, but it's insufficient, in my opinion.

Enter this book. I had a wonderful, wise old man for a vet, and during my dog's first checkup, he went through a list of things. When he reached the "behavior" topic, he recommended the authors of this book (who were local), and this book specifically. At first, I balked a bit, because I figured it must have been something so-so to have been written by local authors who also consult on these kinds of issues. Some time later, I actually spoke with the author, regarding some in-home consulting to help me lay sound foundation for training and raising my puppy. Our schedules didn't match up, but she recommended the book and said it would answer all of the questions I was having.

It did, and more. This is, simply put, the best written, most useful puppy book I have ever come across. It's very light on philosophy and celebrity self-inflation and things like that. It's extremely to the point, so much so that I recommend reading it in small chunks, and really meditating on what you've learned in just a few pages, because every few pages contain an absolute wealth of information. It lays general groundwork that is phenomenal, but it also has specific answers to questions like "What do I do about excessive mouthing?" Rather than give one of the many dumb answers I found all across the internet (and strangely, were lacking in the two most popular puppy books on Amazon), the book provided a brilliant answer that plugs into an underlying behavioral training framework that was just as brilliant. Perfect.

I have no doubts in saying that anyone who studies this book in its entirety, and puts its lessons to practice, will end up with a very well trained and behaved dog indeed.
Read more
26 people found this helpful
Helpful
Report abuse

Diandra
5.0 out of 5 stars Ready for a new dog!
Reviewed in the United States on November 4, 2017
Verified Purchase
Makes me feel totally and happily prepared for a new puppy or dog. Also makes me feel like I can train old dogs, very satisfied with this book!
Read more
One person found this helpful
Helpful
Report abuse

Kevin
5.0 out of 5 stars Best puppy book I found.
Reviewed in Canada on August 16, 2018
Verified Purchase
Just got a Boston Terrier puppy, and read a few puppy books.
This one was the best. A handbook on the right way to do things.
A touch technical, but lot’s of insight on why puppies behave the way they do, and clear steps on how to get good behavior.
Read more
Report abuse

Krisztina Harasztosi
5.0 out of 5 stars Well-organized, informative
Reviewed in Canada on October 22, 2019
Verified Purchase
Loved it! Well-organized and informative. A good starting point for training a pup. I miss a sample schedule though, to use as a vase to start out with a puppy
Read more
Report abuse

carol kap
5.0 out of 5 stars Great book
Reviewed in Canada on September 20, 2020
Verified Purchase
It really helped me with our new puppy. Exactly what I needed to read.
Read more
Report abuse

Hans Walter Tiedje
5.0 out of 5 stars Best book
Reviewed in Australia on January 13, 2021
Verified Purchase
If you have or planned to have a puppy, this book is a must
Read more
Report abuse
See all reviews