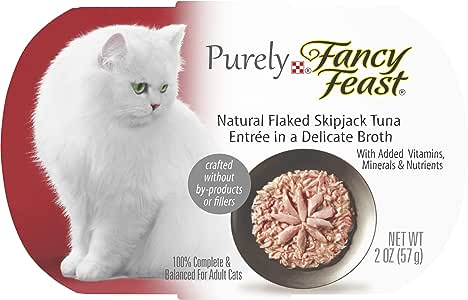 Treat your cat like a VIP with Fancy Feast Purely Natural Flaked Skipjack Tuna Entree With Added Vitamins, Minerals & Nutrients adult wet cat food. Natural ingredients you can see give her the taste she craves along with the quality you expect from a gourmet cat food. This delectable Fancy Feast recipe is crafted with pieces of real skipjack tuna for seafood flavor she's can't resist. The small, tender flaked bites are easy for her to manage, and the tempting texture holds her attention during feedings. Served in a delicate broth, this Fancy Feast wet cat food is good to the last savory drop. With essential vitamins and minerals in every serving, this gourmet recipe lets you rest easy knowing she's getting the nourishment she needs along with the taste and texture combination she adores. Explore all of our Fancy Feast Purely recipes to give your beloved cat 100% complete and balanced nutrition at every single meal.

4.6 out of 5 stars
4.6 out of 5
2,656 global ratings
How are ratings calculated?
To calculate the overall star rating and percentage breakdown by star, we don’t use a simple average. Instead, our system considers things like how recent a review is and if the reviewer bought the item on Amazon. It also analyzes reviews to verify trustworthiness.

As for this product, a back story is needed. As mentioned above, I never used wet/soft food for my cats. Hill's Science Diet dry food has always been my food of choice for the past 2 generations of cats, and is still the main food for 3 of my 4 cats. However, in March of 2018, I was introduced to a senior cat in a bad situation. We'll just call senior cat "Chi" to protect the innocent. Chi's human mother had rescued her from being destroyed, when the state confiscated a pet hoarders house. She was one of 12 (of the 250) who were rescued, the rest were put down. The vets diagnosed her with several diseases including Feline Leukemia, Brain Tumors, severe allergies and weak gums that could not support teeth (a genetic condition). Her human mother was told that the kitty would not live more than a year. Moreover, mom was moving across the country, and the vets also said that the pressure from the flight would probably kill her. Chi survived all of this only to have her human mother move into a house where the landlady was a cat hater. Unfortunately for Chi, her mother actually considered what the landlady proposed, and that was to put her to sleep, or move out. Not wanting a 4th cat, I could not allow this little survivor to meet her fate because she became "inconvenient". Despite her hard life, Chi was a very sweet kitty. When I received her, she was between 10-12 years old, 4 lbs, eyes crusted shut because of the constant discharge, blood coming from her nose and ears where she would scratch until they bled, somewhat scared of human interaction, and I was warned that she could only eat a quarter of a can of wet cat food a day, else she would vomit (dry cat food being completely out of the question). In comes Purina Purely Fancy Feast Entrees! Seeing that her previous owner was feeding her $0.23 cat food, I chose Purely Fancy Feast because of its very natural look and ingredients. Depending on the flavor, the first few ingredients are always the main protein and their juices. Yes, Sunflower Oil is used, but reading several veterinarian journals, pet health articles, and discussing whether it is good or bad for my cat (or dog) is inconclusive. Some say it helps with keeping their coat glossy (as well as other digestive positives) and should be added to their diets, while others say its not good (really 50/50 on this). Anyway, Chi loved the food. From day one she ate the entire container without getting sick. She is up to 3 containers a day, is now 6lbs, runs around like and plays like a kitten, and after the first month of just wet food, she now snacks on the Hills Science Diet dry food between feedings. Her recent bloodwork came back very healthy. As I still am in contact with her previous owner and I explain that I do not have any of the issues she had with vomiting, dietary needs, and allergies, she is speechless. Four months after getting Chi on Purely Fancy Feast Entrees has made her different cat, in a very good way. Chi enjoys all of the flavors, but has trouble eating the one with shrimp, as there is a whole small shrimp in each container. My other kitties are glad to help her with this, as they all love the wet food as well (but only get as a special treat). I try to stay away from the fish ones, but Fancy Feast does use Skipjack Tuna, which contains less mercury than other Tunas. I do not use the Tongol Tuna either, as the cubes are too big for Chi and she cannot/will not eat them. But still, this dish looks very natural/delicious as well.

Just a little note, I recently noticed a review that mentioned that this product helped their cat that could not keep food down because of a genetic disorder. More drastic than Chi, their kitty was on the verge of death, but has now been around for an additional 2 years because of this food. Much like Chi, the reviewer also commented that her kitty now snacks on dry food between feedings as well, without any issues. Perhaps the natural ingredients or perhaps the sunflower oil (that I have read to be a good 'coater' for sensitive bellies), but there are at least 2 people (and 2 very special kitties) that are very thankful for Purely Fancy Feast Entrees.

xxSmiley
2.0 out of 5 stars Not really worth it.
Reviewed in the United States on March 10, 2018
Color: Chicken & BeefSize: (10) 2 oz. TraysVerified Purchase
Alot to say about this food.

My cats used to go nuts for this when I first started buying it.
Even my picky cat loved it. This flavor is cheaper than the others for some reason so I bought alot
and figured I'd replace their other food with this for a little while. I gave them 2-3 tubs for each cat, per day. One of my cats fell so ill and malnourished.
She started rejecting this food and then ANY food. I took her in to the vet and spent $600 getting her tested and all kinds of
fluids to rehydrate her. My other 2 cats were fine but began to eat less and less of it until they would just turn away from it.
My sick cat even tried burying it, which normally means she thinks it's garbage or uneatable. The vet didn't want to tell me
directly that it was this food that caused this but she told me to give her MORE than just this or she will return to this state.

I'm guessing this food doesn't have all the nutrients it says it does. And a cat requires more than just whats in this.
I loved the packaging and proportions and I really was loving how they liked it for a while. However, it's not worth it. It's just too expensive for what little nutrients it provides. It's not going to make your cat sick eating it for a day. It's a nice little treat if you want to give you cat something special once in a while but it's definitely not a daily food. I recently bought the chicken flavor from the store and they won't even touch it.
I now make my own shredded "chicken and broth" (chicken boiled in water). I add tiny pieces of lettuces to it for fiber. They all LOVE it. My sick cat got SO much better and in returning to her old self =) Hope this helps!
Read more

Elizabeth Stewart
1.0 out of 5 stars They changed the recipe, my cats won't eat it anymore.
Reviewed in the United States on June 22, 2015
Verified Purchase
Fancy Feast has changed the recipe. When this was "Appetizers" it was my cats' favorite treat. Now it's called "Purely", and Fancy Feast have added sunflower seed oil to what was just meat, and none of my three cats will eat it now. When I wrote to Fancy Feast, they told me they hadn't changed the ingredients; that's a lie, it's obviously different, and it's written on the package. I will be donating this to the local cat rescue, in hopes their cats will like it better, and I won't be buying anything else from Fancy Feast ever again. Not only because they ruined my cats' favorite treat, but because they lied to me about it. If you are also looking for a replacement for this treat, I found PetSmart makes "Grreat Choice Purrrely Divine" treats which are almost exactly the same as the old Appetizers.
Read more
112 people found this helpful
Helpful
Comment Report abuse
See all reviews

Page 1 of 1 Start overPage 1 of 1
This shopping feature will continue to load items when the Enter key is pressed. In order to navigate out of this carousel please use your heading shortcut key to navigate to the next or previous heading.
Back
Next
Pages with related products. See and discover other items: best premium wet cat food, purina fancy feast medleys, feline canned products, Best tuna flakes for cats, Best fish flakes for cats