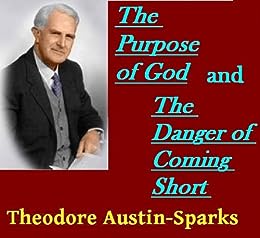 by Theodore Austin-Sparks (Author) Format: Kindle Edition
See all formats and editions
Sorry, there was a problem loading this page. Try again.
The Purpose of God
First published as an editorial in "A Witness and A Testimony" magazine, March-April 1943

It is of immense help, in contemplating the manifold activities and energies of God, to be able to gather everything into one inclusive, comprehensive, and concrete issue. The Bible, from Genesis to the Revelation, covers a wide range and includes a vast amount of matter, but it has one all-governing and conclusive objective. The purpose of God is one, and only one. It is always referred to in the singular; “Called according to His purpose” (Rom. 8:28); “According to the purpose...." (Eph. 1:11); “...According to the eternal purpose” (Eph. 3:11); “According to His purpose and grace" (2 Tim. 1:9). It is not a variety or number of things; it is just one.

And what is the one, single, comprehensive purpose? The answer is Christ! “His Son, Jesus Christ." And when we ask further, What about His Son? The answer is, to have Him fill all things and to have all things in Him. That this is so is made clear in the definite statements of Scripture; “In Him were all things created, in the heavens and upon the earth, things visible and things invisible... all things have been created through Him, and unto Him...” “For it was the good pleasure of the Father that in Him should all the fullness dwell." (Col. 1:16, 19) “Whom He appointed heir of all things, through Whom also He made the worlds (ages)” (Heb. 1:2).

The Danger of Coming Short
by Theodore Austin-Sparks
First published as an Editorial in "A Witness and A Testimony" magazine, March-April 1960

"Lest any one of you should seem to have come short" (Hebrews 4:1)

For those who, like the New Testament writers, have a real burden and sense of responsibility for the spiritual life of God's people, one of the most heart-breaking things is the way in which so many who gave promise of going right on with the Lord are caught in some side-track and turn to something other or less than He meant for them. Not necessarily to sin or to the world, but to something which, while it brings them a great deal of gratification for a time, eventually proves to be a diversion resulting in arrested spiritual growth, and they are found in a backwater, a cul-de-sac, occupied with an alternative to "the whole counsel of God.” Their “new discovery,” or “light,” or “guidance,” as they speak of it, by reason of the let-up of some tension, solution to some problems, promise of release into self-realization, and escape from pressure, when the novelty and glamour have worn off is found to have been "deceitful waters,” producing Jericho's fruits which fall before they are ripe.

The pathway of God's eternal purpose is strewn with such tragedies. The Bible, in both its Testaments, records the sad story of many who have missed the way, turned aside, and - to use the language and fear of Paul - not attained “unto the prize of the high calling.” The New Testament is predominantly occupied with warnings, admonitions, exhortations and entreaties, because of this possibility, and with the tragic contingency as the ever-lurking peril and threat.
Read more
Previous page
Next page