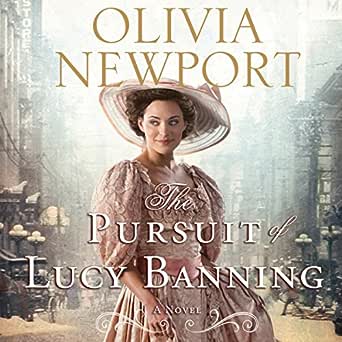 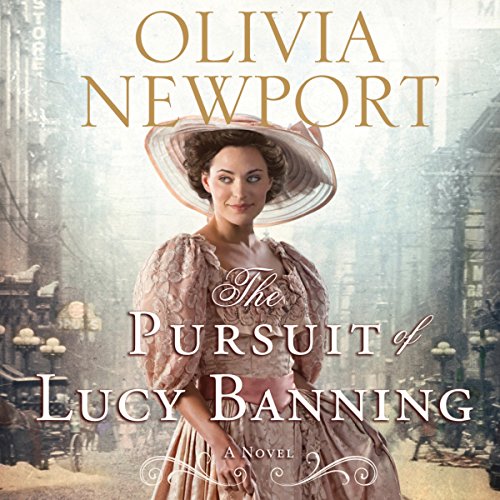 The Pursuit of Lucy Banning: A Novel

4.3 out of 5 stars
4.3 out of 5
543 global ratings
How are ratings calculated?
To calculate the overall star rating and percentage breakdown by star, we don’t use a simple average. Instead, our system considers things like how recent a review is and if the reviewer bought the item on Amazon. It also analyzes reviews to verify trustworthiness.
Top reviews

Erin H.
5.0 out of 5 stars A cute, clean romance
Reviewed in the United States on June 25, 2018
Verified Purchase
I really liked this book!

A cute, clean romance. I wouldn’t say the romance took center stage, but I thought it was really cute and more realistic. It took a little time. (Distance made the heart grow fonder, or the guy finally just ignored their class differences.) It’s a romance between social classes. Newport didn’t go into the issues that can come with being from such different worlds. There’s a little resistance with the parents, but I wonder if by this time the classes were blurring . I don’t know. But it wasn’t a big part of the book, which I didn’t mind. Not too much silly drama there.

There were multiple storylines going on: the preparation for the Chicago Worlds Fair, a bit about the orphan crisis in Chicago at the time, women getting more freedom to make a name for themselves and do more than just look pretty and a bit about mental illness. Plus you get some background on the heroine for the next book. I thought this all flowed well. I didn’t notice there was so much going on until I was done and getting ready to write a review. I think some people were disappointed at some things that were left out or not elaborated on, and I might have been for a moment, but then I got a recap and just enjoyed the story. I think it all worked together to make a great book!

Looking forward to reading the next book!

kitkat
5.0 out of 5 stars Great Story.
Reviewed in the United States on May 19, 2016
Verified Purchase
I really enjoyed The Pursuit of Lucy Banning.This story takes place around the 1890's Grover Cleveland was President, and the Chicago World's Fair was in it's making. With that said, Lucy is a young woman, mind of her own, wanting to further her education, and giving time to help orphans. Marriages were still prearranged, woman born in wealth, didn't go to college, or work outside the home, ladies in politics was not acceptable. It was fine for tea's and honorable do-good activities; such as fund raising, volunteering to aid church fundraisers, planning large dinners, or a Ball.
In order for Lucy to take a college course she had to have the aid of her Aunt, to help conceal her reason to be away from home, other then working at the orphanage, to her parents, and fiancee, Daniel) who disapproved of even her helping the orphans.The twist comes in with Daniel, who was also a close family friend, and stayed at the Banning home a lot, as it was closer to his work, and saved a long travel back and forth. When he found out that she was going to college, he wanted to marry right away, so Lucy would give up her foolish thoughts. Lucy couldn't go through with the wedding and broke it off, but Daniel still stayed close with the family and still stayed overnight, as he was also friends with Lucy's brother. Meanwhile, the Bannings had hired a new maid, Christine, who was trying to hide her newborn baby in her room, as she wouldn't have been hired if anyone had known she had a child. Lucy found out about the baby, and did whatever she could to find a place for Christine's baby, so that Christine could visit on her days off. The relationship between the two women, one from a family of wealth, and the other a lowly servant, is a heartfelt story with how they became close friends. Let Lucy take you on her journey that's filled with twist and turns, determination to further her education, and Daniel, who turns out to be sweet in the beginning, yet at one point showing a little quirk, that tended to be evil...but not all is as it seems. It was a lot packed into this story, but it's and easy, fun, relaxable read, and I love stories that are of historical time periods. The only complaint is it was never fully revealed why Christine had ran away from her home. Other then that, what's not to like about an adventurous woman, and a sweet love story too.
Read more
Helpful
Comment Report abuse

JDillon
2.0 out of 5 stars A lot of potential, but poorly executed. Couldn't finish it.
Reviewed in the United States on June 6, 2016
Verified Purchase
I wanted to like this, I really did. I love historical novels, and I'd not read one from the Industrial age yet. Unfortunately, while I could tell that research had been done for the book, the writing to put the research to use seemed clunky. It wasn't fluid - more someone saying, "See all the history stuff I've learned? Let me put a rich person as the main character, so they are in a position to experience every single thing I could find about the time!"

I found myself quite frustrated at much of it, and felt bounced back and forth. I find it doubtful that Charlotte could have escaped upstairs to her rooms as often as she would've needed to, and what WAS she doing with the soiled diapers? As for Lucy, so much emphasis was placed on her going to the art show with Will (what I would've considered a key moment in determining the path of her relationship dilemma) but then it was skipped completely and barely brushed on in conversation!

I made it about 125 pages before I gave up - more than I normally give books that don't grab my mind. I just kept hoping this one would open up and become more fluid.
Read more
Helpful
Comment Report abuse

Sheri A. Wilkinson
4.0 out of 5 stars A nice historical romance
Reviewed in the United States on January 20, 2015
Verified Purchase
The Pursuit of Lucy Banning (Avenue of Dreams, # 1) by Olivia Newport

Set in 1893 Chicago the year of the Chicago Exposition, it tells of the life of Lucy Banning. A wealthy young woman living on Prairie Avenue an affluent area (for that Era). She is set to marry her childhood (close family) friend, a prestigious banker that she has known all her life.

She secretly attends art classes at the university Of Chicago, to which her parents would greatly disapprove. They expect her to "marry well". She meets a young Architect, a man not of great wealth, one her parents would not accept as a husband for their daughter.

The story is well written, and true to the era. I being from Chicago, really enjoyed the references to Chicago at that time. I liked Lucy, she was a woman before her times. Strong willed and determined to do things her way, with no thought of the outcome of her actions.

There was also the romantic aspect of the story, that I found a bit predictable, yet still enjoyable. Overall the story was original, well written, the characters were likable and the plot was believable. I would recommend The Pursuit of Lucy Banning to those who like historical/romance. I would like to read more by Olivia Newport.
Read more
One person found this helpful
Helpful
Comment Report abuse
See all reviews

Chris
3.0 out of 5 stars Mediocre
Reviewed in the United Kingdom on April 22, 2016
Verified Purchase
Whilst there was nothing bad about this story there was not much excitement either & it just plodded along predictably
Read more
Report abuse

HYBRID NAT
5.0 out of 5 stars Fantastic
Reviewed in the United Kingdom on October 5, 2014
Verified Purchase
I absolutely love historical fiction. I really enjoyed this book and definitely recommend this. I look forward to reading more books by this author
Read more
Report abuse

Mrs. becky mason
5.0 out of 5 stars glad she had spirit
Reviewed in the United Kingdom on September 20, 2014
Verified Purchase
This intrigued me as characters in this era are usually meek, glad she had spirit. Good read
Read more
Report abuse

jolie
5.0 out of 5 stars Enjoyable read.
Reviewed in the United Kingdom on September 29, 2014
Verified Purchase
Very enjoyable read . One of those stories you want to go on and on look forward to next one.
Read more
Report abuse
See all reviews