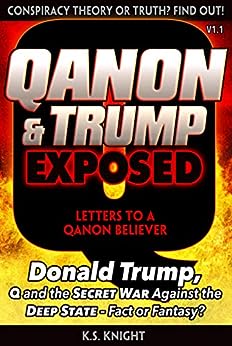 2.3 out of 5 stars
2.3 out of 5
14 global ratings
How are ratings calculated?
To calculate the overall star rating and percentage breakdown by star, we don’t use a simple average. Instead, our system considers things like how recent a review is and if the reviewer bought the item on Amazon. It also analyzes reviews to verify trustworthiness.
Top reviews

Amazon Customer
1.0 out of 5 stars Trump Bashing
Reviewed in the United States on April 8, 2019
Verified Purchase
The author may have thought he could curb interest in Q-anon.

Not possible. For those of us who have known there was something wrong with this world, but never thought anything would be done about it.... Q is here changing all of that. Won't the deluded be shocked, those who have been programmed to be agreeable sheep of the New World Order? They will wake up and see that the script was written aeons ago in the WORD - to end the destruction and desecration of God's children. There is nothing to fear for those who love their neighbor, those who have not participated in the ruin and abuse.

I tried to "return" this book and get my money back, but I think you need to do that within 24 hours for kindle books. Shame, hate to have the author profit from bashing our very misunderstood President. They will learn.......
Read more
29 people found this helpful
Helpful
Report abuse

Cherie Elias Saly
1.0 out of 5 stars A leftist book of negativity
Reviewed in the United States on February 1, 2019
Verified Purchase
Written by a Californian with typical left wing bias. Not worth the cost. Bought it hoping to learn about Qanon.
Read more
30 people found this helpful
Helpful
Report abuse

Jamie
5.0 out of 5 stars QAnon is really a demonic movement & satanic cult
Reviewed in the United States on June 17, 2020
Christians should care about QAnon because it’s a satanic movement infiltrating our churches.

Although the movement is still fringe, it is likely that someone in your church or social media circles has either already bought into the conspiracy or thinks it’s plausible and worth exploring. We should care because many believers will or are being swayed by the demonic influences of this movement.

Darren HelmanSavacool
1.0 out of 5 stars WWG1WGA
Reviewed in the United States on April 3, 2020
I'm sorry but it seems you know nothing about QAnon or what they stand for this belief and the group has been around for 20 years just because it's just now popping up is because just recently alot of people are just now finding out about this group and its beliefs if you wanna know all of the evidence they have that this is true go watch the video on youtube that was posted 2 weeks ago that's 3 hours long.
Read more
12 people found this helpful
Helpful
Report abuse

Tommy Pool
1.0 out of 5 stars No thanks
Reviewed in the United States on July 22, 2020
It's amazing how many conservative people bought this book, I assume, to learn about Truth and to be informed as much as possible. The description clearly alludes to Trump and Qanon being "debunked." They were open to Truth just like I am! If Trump and Q are the "big lie" I want to know that!
By the looks of these reviews, however, this book is just another ploy to deny and deceive people so we won't know what is REALLY happening in our world. Now, Amazon (imagine that) is allowing people to read it FOR FREE! Uh, hard pass.
Thanks, reviewers, for steering me away from a big waste of time. WWG1WGA
Read more
3 people found this helpful
Helpful
Report abuse

arnold
4.0 out of 5 stars Some worms as large as Vienna sausages!
Reviewed in the United States on March 7, 2019
It helps explain why his mother was a virgin when she gave birth to trump. How the magic happened.
The Mecrenia worms are a result of those trying to stop him. It’s not too late, but many are infected with this brain worm. Help stop the bad people.
Read more
4 people found this helpful
Helpful
Report abuse

Dewayne George
1.0 out of 5 stars Lies
Reviewed in the United States on June 9, 2020
This is a book of lies so if you want to find out how the deep states ties run deep then get this book because it’s a part of the deep state. It’s just a hit piece and from what I see pretty much nothing in here is true. Try again lefty.
Read more
2 people found this helpful
Helpful
Report abuse
See all reviews
Back to top
Get to Know Us
Make Money with Us
Amazon Payment Products
Let Us Help You
EnglishChoose a language for shopping. United StatesChoose a country/region for shopping.
© 1996-2021, Amazon.com, Inc. or its affiliates