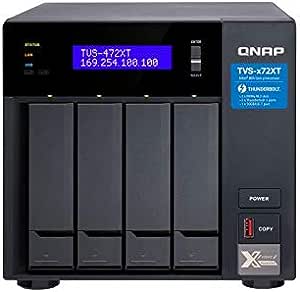 Thunderbolt 3 and 10GbE enables high-speed file sharing and efficient collaboration throughout your business. Use M.2 SSD's to further accelerate your storage to tackle heavy workflows.

Data loss can happen to anyone. Even if a file was accidentally deleted, Snapshots fully records your system, protecting files and data from accidental deletion and malware attacks.

Powered by up to an 8th generation Intel Core i5 processor, the high-performance TVS-x72XT Series features both 10GBASE-T and Thunderbolt 3 high-bandwidth connectivity for tackling heavy workloads and smoothly transferring, displaying and editing 4K videos in real-time. With M.2 SSD support and the ability to install a graphics card, theTVS-x72XT Series provides the ability to boost performance and create a scalable working environment for collaboration and high-speed file sharing. The TVS-x72XT Series is driven by high-quality hardware that delivers optimum performance, comprehensive multimedia features, expandable storage capacity, and numerous other NAS functionalities to inspire greater creativity.

4.1 out of 5 stars
4.1 out of 5
66 global ratings
How are ratings calculated?
To calculate the overall star rating and percentage breakdown by star, we don’t use a simple average. Instead, our system considers things like how recent a review is and if the reviewer bought the item on Amazon. It also analyzes reviews to verify trustworthiness.

jdmba
4.0 out of 5 stars Good unit - But here's some cautions
Reviewed in the United States on May 28, 2019
Capacity: 6 BayStyle: NASVerified Purchase
This is my first NAS. It was fairly easy to set up following the quick guide, but I did hit some setup bumps along the way. For those who may buy this unit, here are some things to know so you don't make the same mistakes I did:

Hardware Warnings:
1) If you are buying the x72XT, make sure you also own a right angle screwdriver. If you want to put M.2 cards into the x72XT, you are going to need to get that thunderbolt card out. There is maybe an inch clearance between the thunderbolt card and the bracket above it.
2) Also if you are going to put in M.2 cards, make sure you are ready to remove whatever label the manufacturer has put across the chips. Its kind of tough buying a new NAS, 2 new M.2's, and hard drives, and the first thing you need to do before you do anything is take a blade to the top of your M.2 card.
3) Also on the M.2 cards, be careful if you want to use it as a read/write cache. If you start dumping a bunch onto the NAS the M.2 heat warning will pop up, even with their heatsinks on the controller. My recommendation would be to have them as a read cache until you have fully populated the NAS with whatever you are backing up, then change it to read/write after, if you want read/write that is.

Setup Warnings:
4) There is a guided setup which is more or less intuitive. Takes a bit of time to set up, and then prompts you to log in. It populates the usename with the name it gave the NAS (like NAS8384). You need to change that to admin. I didn't realize that; just kept entering the password I had given it and kept being told it was no good. Had to reset the unit and start again.
5) If you are setting up the Plex app, make sure you do it from the non-thunderbolt connection. The x72XT gives you 2 IP addresses, 1 for thunderbolt and 1 for network. The Plex setup will fail if you set it up while under the thunderbolt connection - it can't find that server. That was a reset for me too :(

Other
6) Your may find all your appstore icons disappear. This is actually an ad-blocker problem, not a QNAP problem. Clearing the cache worked for me on Firefox, and Edge worked anyway. Still can't get them back under chrome.
7) As QNAP will remind you, if you want to use their Q-Cloud to access your NAS from elsewhere, remember that all data passes through their servers. Something to think about.
8) Tech support has email support and can even do a live diagnosis, but none of that in a truly timely fashion. I find the qnap forum to be the more likely place to get prompt answers. After all, if you are trying to set up a $1500 NAS, which has $1600 of hard drives, $400 of M.2's, and what not, waiting X number of business days is not really going to be your preference.

So 4 days in, I have it set up and mostly loaded. Would have taken 1 day had I known the above. Otherwise, it seems like a good unit, if not a little noisy when a bunch of hard drives are accessing.

Marauder
3.0 out of 5 stars Where's the Warranty
Reviewed in the United States on June 25, 2019
Capacity: 4 BayStyle: NASVerified Purchase
A $1000+ product that no longer has the 5 year warranty but only a 1 year one. Want to add 1y extended $139 and 3 yrs $579.
Really?
Tough decision now...keep or use something else.
Read more
47 people found this helpful
Helpful
Comment Report abuse

James M
5.0 out of 5 stars HIGHLY RECOMMEND THIS SERVER
Reviewed in the United States on June 7, 2019
Capacity: 8 BayStyle: NASVerified Purchase
I highly recommend this server for 4K video editing for two Macbook Pro's. I'm getting around 700mps-1000mbps with black magic speed test with 8 the 7200rpm drives installed before even trying to install the NVMe drives which supposely really speed up transmission speed.

HIGHLY RECOMMEND THIS DEVICE FOR SMALL VIDEO WORK GROUPS THAT NEED TO WORK ON THE SAME PROJECT AT THE SAME TIME. ITS THE LOWEST COST INVESTMENT THAT IS THE FASTEST OPTION OUT THERE. For only two machines its even faster than the "video" server with 4 x ssd slots added which costs over 1k more! EXCELLENT DEAL... THE ONLY SOLUTION FOR SMALL VIDEO EDITING WORK GROUPS!
Read more
29 people found this helpful
Helpful
Comment Report abuse

Gianeshwar
3.0 out of 5 stars QNAP TVS-472
Reviewed in the United States on March 16, 2019
Capacity: 4 BayStyle: NASVerified Purchase
Good NAS, you get a good product out of the box as is. But memory is to low, eventually u have to upgrade to higher to support this power house. 4GB don’t fits the design of this machine, 2X2 in both slots. They should have used one shot for 4GB and user can insert upgrade is other slot. 2GB is of no use if u upgrade or have other NAS to use it. Other than that it’s a good device and nice upgrade.

May-18-19 — Adding more information after using it for few more months. I’m sometime experiencing NAS is totally freezing and not responding on web interface or from mobile device apps. To come out of this situation, NAS has to be shut down from the NAS itself. I never experienced this is my earlier QNAP NAS I upgraded.
Read more
30 people found this helpful
Helpful
Comment Report abuse

J. Apolis
4.0 out of 5 stars Great product but has some limitations
Reviewed in the United States on August 23, 2019
Capacity: 8 BayStyle: NASVerified Purchase
I love this QNAP TVS-872XT. It has plenty of features and capabilities including Thunderbolt 3. I have however discovered some limitations; 1) Can't add another Thunderbolt 3 pcie card due to hardware unavailability and the software doesn't support an additional card. 2) Can't add a Graphics GPU card without removing the Thunderbolt 3 card. I confirmed this with QNAP tech support. 3) The system only comes with 16GB memory, and to expand to the max 32GB you must remove and replace the memory modules. I am still learning all of the capabilities which are numerous, and even with these limitations I think this is a great product.
UPDATE after 1 month: I successfully upgraded to 32GB memory using V-Color 32GB TN416G26D819K-VC. Note that if you choose a third party memory it must be NON-ECC as well as matching the other parameters. I successfully added the QNAP Dual-Band Wireless PCIe Expansion Card (QWA-AC2600). I can now directly access the NAS via Wifi, and internet access is passed through the QNAP. I bought a 2-year SSL Certificate from QNAP for $45, and now can access my NAS over the internet. Note you must install the ios/android QNAP apps. I am liking this NAS more and more as I continue working with it.

Update March 2020: I can't get the Thunderbolt 3 to work with my Windows 10 PC. I have called QNAP support a few times but still no resolution.
Read more
9 people found this helpful
Helpful
Comment Report abuse
See all reviews