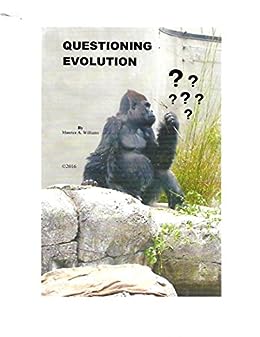 by Maurice Williams (Author) Format: Kindle Edition
See all formats and editions
Sorry, there was a problem loading this page. Try again.
The theory of evolution has become well accepted in The United States. I was impressed by it during my college days where I majored in Biology. But, even then, I knew that it contradicted what I learned in my youth about religion. It didn’t confuse me for many years because I just compartmentalized my life into basically two categories: the world of God and religion and the world of science. But in my mature years I began to realize I should not divide my world view that way. There is only one truth. I should recognize the truth in everything.

So I started composing essays where I debated the pro and cons of both positions, evolution and creation, for about twelve years and posted my essays on The Internet. I gradually came to the conclusion that Evolution, although it is a good way to understand how species gradually change with time, it is absolutely bogus when it tries to argue that is no God, not even an intelligent agent of any kind behind the real world. Finally I put most of my essays together in my book “Questioning Evolution.”

What convinced me is, even though physical matter does exhibit evolutionary change through time, the laws of nature governing that evolution do not change. They are uniform and exact whenever they operate and wherever they operate all through the entire universe and all through time. These laws are not physical objects that are composed of mass and have weight. They are more like spiritual things.

Maria V
5.0 out of 5 stars Observations of the theory of evolution versus creation
Reviewed in the United States 🇺🇸 on December 17, 2019
Verified Purchase
In his book Questioning Evolution author Maurice A. Williams addresses the thoughts that many people have had ever since Darwin proposed his theory of evolution, which says that God doesn’t exist. He does not come across in an argumentative fashion, but in a metaphysical way defining his personal views of reality and our understanding it. The author wrote 133 essays over a twelve year period pondering evolution versus creation. In each essay he is fair in sharing on both entities.

Williams states, “There are two worlds I am immersed in: the physical world and the spiritual world. I need to come to terms with both worlds. One can be investigated through observation and experimentation; the other can only be approached through faith in the testimony of someone who knows.” From his childhood Biblical training, he learned about God and what scripture says about the revelations of God. As he grew older he learned contradicting concepts of evolution through his schooling. Having an understanding of the Christian faith, he recognized that God had a revelation founded on love for humankind and the driving force of his personal relationship with God. For many there may be conflicting thoughts when weighing what one cannot see versus what one believes can be scientifically proven.

What I find most compelling in one of his essays is that Williams reminds readers that if we believe that God created us with free will then we have the opportunity to choose to believe in Darwinism or we can have faith in a supernatural God who also created us with a purpose. Williams admits that the world’s influence had caused him to have conflicting thoughts on this very topic. At one point in his book the author concludes that “God had already created spiritual beings, something the scientific community cannot verify because science does not deal with spiritual things.”

This book shares thought provoking observations on a largely debated topic. He carefully states scientific theory and presents his spiritual views without judgment. It would be a helpful read for someone who is struggling to understand the opposing views on how our universe was created.
Read more
Helpful
Report abuse

The McKenzies
5.0 out of 5 stars Really makes you stop and think
Reviewed in the United States 🇺🇸 on February 20, 2020
Verified Purchase
I love books that make you challenge your own view of the world around you, and Maurice's book does just that. While he doesn't deny the existence of God, and in fact makes his stance on God very clear throughout the book, he does a wonderful job of making you question everything else regarding how we advance not just as a species but ourselves.

One of my favorite points was when he discusses the "flaws" in the human body, and why weren't we made "perfect" and without ability to come down with diseases. The answer really struck me. "Because God wants it that way". A great point of thought. I've always thought of the source of many of our religion-based ills as coming from what was little more than someone with severe control issues. What if there was no malevolent-ness or benevolent-ness? What if existence just IS?

"What I feel is the best line in the book was "Lucifer was created good, and out of good he chose evil. I was created already compromised by evil, but out of evil I have the opportunity to choose good." It's not every day that I get whalloped by a profound statement, but that one really made me sit back and go "Wow" because then it doesn't matter what religion you do or do not believe in. If you see yourself as born with evil/sin/etc, and from that instead of being bad, you CHOOSE to become good, is that not the goal of most organized religion? (To be good to go to Heaven, or to be good to gain Enlightenment, etc)

While I may not share the same theistic beliefs as the author, I do have a genuine appreciation for his writing. I do love to study theology and this book is definitely one that students of faith - both in practice and in science - should take a look at and consider carefully.
Read more
Helpful
Report abuse

Joanne Bilodeau
5.0 out of 5 stars Mind opening book.....
Reviewed in the United States 🇺🇸 on December 20, 2019
Verified Purchase
From the very beginning, this book drew me in and grabbed my attention. Being a spiritual but not religious person, it made me think on a lot of things. It has a lot of religious aspects, some of which I did not understand being of a non-religious type person, but that just made me like the book even more since it explained a lot of that stuff. Which made me comprehend it. It explained some of the evolution stuff so that even I could understand it and, much as I did very well in high school science classes, some evolution explanations escape me, it is a complex subject, to say the least, to understand. But having said all of that I would still love this book.
I have purchased the kindle edition but I will definitely be buying the paperback version as well.
It has 130 chapters, and that sounds like a lot, but it isn't, they are short chapters and explain a little in each one. The writer shares his spiritual views on all of the chapters involved, it is his opinions on these subject matters. The book makes you ask "what if this ?" and "what if that ?", it is very mind opening it every way. You definitely have to finish the whole book, not just read a few pages or a few chapters and say "Nah, don't like this book", it makes you think on every scientific subject written, this writer just seems to psychologize it, but there's nothing wrong with that if you are open minded to all of the God-like and science-like information out there.
I would highly recommend this book and most definitely give it a 5 star rating, if i could give a higher one I would.
Hope to read more from this writer.
Read more
Helpful
Report abuse
See all reviews
Report an issue
Does this item contain inappropriate content?
Report
Do you believe that this item violates a copyright?
Report
Does this item contain quality or formatting issues?
Report