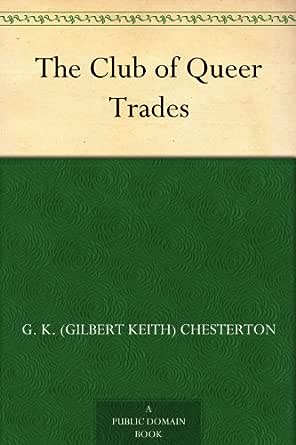 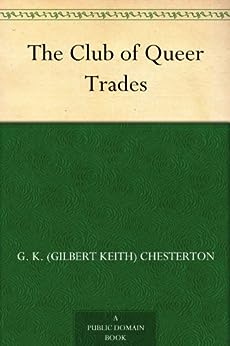 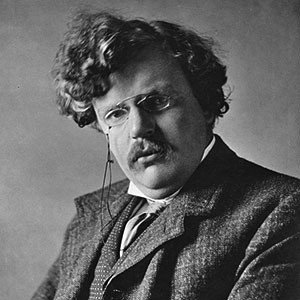 Check out these other great works (hundreds of volumes):

4.1 out of 5 stars
4.1 out of 5
41 global ratings
How are ratings calculated?
To calculate the overall star rating and percentage breakdown by star, we don’t use a simple average. Instead, our system considers things like how recent a review is and if the reviewer bought the item on Amazon. It also analyzes reviews to verify trustworthiness.
Top reviews

Pop Bop
TOP 100 REVIEWER
4.0 out of 5 stars Wit, Whimsy, and Wisdom
Reviewed in the United States on December 4, 2016
Verified Purchase
There's a set of books out there somewhere in book land titled "The Wit, Whimsy, and Wisdom of G. K. Chesterton", and Volume 2 of the set includes "The Club of Queer Trades". That set isn't free, but this Kindle volume is, so here you have a brilliant opportunity to dip into the Chesterton Club risk free.

These six stories are supposedly mysteries, but they are more along the lines of odd events with odd explanations. All six stories are connected to the Club of Queer Trades, a highly unusual and eccentric club composed of members who have created unique and original ways of making a living. We "solve" these mysteries in the company of Basil Grant, an ex-judge, who somehow manages to be both edgy and vague at the same time.

These are not Sherlock Holmes mysteries, indeed they explicitly reject the rational and deductive in favor of the intuitive. They are solved off-handedly and almost mystically. The solutions are improbable and droll. Our hero spends a good deal of his page time laughing to himself and his pronouncements are aphoristic and often well beside the point. Mystery lovers did not particularly care for these stories; the hero was not exactly embraced by the reading public; many Chesterton admirers either didn't get or didn't appreciate the joke.

But, I read these stories as simply an opportunity for Chesterton to have some light fun. If you just read it for the occasional throwaway line, or pointed observation, or withering aside, or colorful turn of phrase I suggest you will be quite well rewarded by this curious collection.

Ring Walker
3.0 out of 5 stars for someone - like me - who's been steeped in 19th century literature ...
Reviewed in the United States on September 25, 2015
Verified Purchase
It was amusing. The characters and exposition were enjoyable, for someone - like me - who's been steeped in 19th century literature (by the lesser-knowns) for the past few years. I'm glad I found this author because I'd thought I might have exhausted this non-renewable resource. I really like period-actual, as opposed to period-"authentic", novels because the words, circumstances, plot devices and character development amount to a course in cultural anthropology disguised as a good (although at times predictable) read. This author is funny, clever with dialogue and has a wonderful vocabulary. Some mystery resolutions are eye-rollers, but no doubt appropriate to the era. If you are sensitive to the course realities of pre-PC writing, you might want to choose something else.
Read more
8 people found this helpful
Helpful
Comment Report abuse

kamarr richée
5.0 out of 5 stars i love you, mr. chesterton
Reviewed in the United States on February 17, 2014
Verified Purchase
I was already reading a number of his other works available for free through Amazon, but come upon this after wondering what is the source of the phrase "truth is stranger than fiction." As it turned out, Chesterton I some of three credited with coining this phrase first, and it can be found in a Chetertonian iteration in this delightful collection of stories. I write for fun, and have enjoyed reading my whole life. As a writer, though, I find Chesterton an imposing figure; his wit and imagination are downright stellar. In this book we have a collection of stories which any author immediately wishes he had written himself. You find people perplexed, climaxed, flabbergasted, and downright left in the dark, and it is usually these same individuals you find yourself identifying with. The focus of attention is split within each story. You have the narrator, Chesterton himself, who puts you t ease for your natural skepticism; throughout you almost feel sorry that he has somehow been sucked into a Twilight Zone life where normal assumptions are about the only thing you can't trust. There is Basil, the man that will either drive yoyo mad with his insane rationale or guide you o sanity through a river of madness. There is poor Rupert, forced to play the fool a his brother does. Better job than him at his job, even though his only flaw is that of being a rational human being. There is the myriad of eccentrics, or Queer Tradesmen as it were, who each deserve their own spinoff show from a scifi universe it seems. Finally, there are the victims of this world gone mad, sometimes unwitting bystanders, sometimes the central cast members themselves.

I must say, when I finished reading these stories I was depressed. I want more, and will likely try and write some myself both as tribute to Chesterton, and partly to satisfy my desire for more. These characters are endearing and likeable, but the plots and their corresponding twists are downright epic. Who would of thought of an unassuming priest pretending to be a drunk old lady while dressed in drag? Or a garden plot spelling out in beatific blossoms a threat of death? The price is unbeatable, to be sure; but if you have the time, and wish to explore worlds that lay foundations of excellent narration and speculation, then I implore you to read through "The Club if Queer Trade."

Ellen Frank
5.0 out of 5 stars G. K. CHESTERTON'S BEST
Reviewed in the United States on August 28, 2014
Verified Purchase
This is Chesterton's greatest work of fiction. In writing the story as six separate tales, Chesterton avoided the snarls his novels got into. And each tale is a gem, though none is better than the first, "The Tremendous Adventures of Major Brown," in which a blameless retired major looks into a strange garden and sees the words written out, in yellow pansies, Death to Major Brown. This outrage turns out to have been perpetrated by a member of the Club of Queer Trades, a society whose membership requirement is that one must be the sole practitioner of one's trade. Fantastical professions succeed one another throughout the book. Basil Grant, a judge who went mad on the bench, leads a group of men on a sort of tour of the club. In the last tale, "The Eccentric Seclusion of the Old Lady," the full joke is revealed of who Basil Grant really is.
Read more
8 people found this helpful
Helpful
Comment Report abuse
See all reviews

Steve Jackson
4.0 out of 5 stars Perfect of its time
Reviewed in the United Kingdom on December 15, 2013
Verified Purchase
A brilliant central idea - never snapped up for a tv format if you don't count The Avengers (Emma Peel era in particular). just read and bask, it has not aged well in places but can be forgiven for its daring.
Read more
Report abuse

lidia
4.0 out of 5 stars Clever and entertaining
Reviewed in the United Kingdom on July 29, 2017
Verified Purchase
Misterious and tricky like The Man who knew too much. Interesting and easy to read. In the author typical style.
Read more
One person found this helpful
Report abuse

Paul Percival
5.0 out of 5 stars Very enjoyable
Reviewed in the United Kingdom on December 20, 2012
Verified Purchase
I thoroughly enjoyed reading this book and felt sorry to finish it so quickly. As a free classic, I highly recommend giving it ago - you've nothing to lose!

The only negative was the formatting (kindle version) which had very irregular line spacing and seemed odd at first but fine when you get into it.

Amazon Customer
4.0 out of 5 stars This is a lite read
Reviewed in the United Kingdom on August 24, 2013
Verified Purchase
Good to while away the odd few minutes whilst waiting for a bus or an ppointment. Not very misteriousat all.
Read more
Report abuse
See all reviews