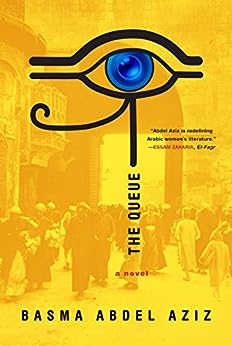 “The Queue...has drawn comparisons to Western classics like George Orwell’s 1984 and The Trial by Franz Kafka. It represents a new wave of dystopian and surrealist fiction from Middle Eastern writers who are grappling with the chaotic aftermath and stinging disappointments of the Arab Spring.”—The New York Times

“An effective critique of authoritarianism...People...will always find a way to control other people in one way or another, should it suit them. Perhaps with the publication of The Queue, the lesson will begin to finally sink in.” —NPR

“Full of mysterious and troubling detail...Abdel Aziz delivers a striking portrait of an authority that claims all power while rejecting all responsibility, that forces people to hear and speak untruths and to embrace their own oppression.”—The Nation

“Basma Abdel Aziz’s novel is not simply an exegesis on the state of her homeland, but a much more universal evocation of the relationships between hegemonic power and grassroots dissent. It feels both fitting and faintly tragic that she had to resort to the literature of dark fantasy to convey it.” —Toronto Globe and Mail

“Although this is a novel, if you follow events in today’s Egypt, it’s not far from the truth. A brave effort.” —New York Post

"The Queue was written before the military coup that pub Abdel Fattah al-Sisi in power, but it has proved prophetic...This is a study of totalitarian logic with the plainness of a Kafka parable.”—Harper's

“Abdel Aziz illustrates how life in an authoritarian state is normalized not just by the government, but by the people.”—Think Progress

“Offers a window into how the revolution failed...underlining, above all, the solidarities and divisions oppression creates, even as it allows for the stories of people who are otherwise often overlooked to be told...[The Queue] points to the errors in thinking that make change impossible.” —Music & Literature

“Weird and wild...a Kafkaesque tale of a modern Egypt.” —BookRiot

“Equal parts dystopia, satire, and allegory...A distinctly Egyptian version of its Orwellian counterpart, much more real and all the more absurd for it...The nature of truth, its official invocations, its power and its danger, lies at the heart of this work.”—Los Angeles Review of Books

“[Abdel Aziz] brings her careful observations of power, pain and Egyptian society to a remarkable debut.”—Qantara

“An Orwellian tale about life in a Middle Eastern country after a series of unsuccessful protests.” —Men's Journal

“[A] trenchant political fantasy...Mahfouz meets Orwell, with a particularly interesting look at the lives of Egyptian women from a variety of class backgrounds." —The Forward

“One of the most exciting post-Revolution novels written in Egypt.” —The New Inquiry

“The sense of total repression that people feel from authoritative states is chillingly detailed...It seems hugely significant...that it’s a woman who has written this book, dared to point her finger in the eyes of authority in spite of what...are very genuine threats to her own well-being.”—Counterpunch

“Captures a sense of futility and meaninglessness...Aziz ultimately suggests the worst while leaving the smallest space for hopeful interpretation, a fitting metaphor for Egypt after the Arab Spring.” —Publishers Weekly

“[The Queue] skillfully paints the image of an authority with the power to turn human beings into indistinguishable copies of one another. Written with satire, the novel moves between dystopia and reality—or a world that seems like reality. With her first novel, Abdel Aziz has clearly secured an important position on the map of contemporary literature in the Arab world.” —Al-Mogaz

“Abdel Aziz creates a world parallel to the one in which we live, one where the characters reveal to us the nature of human beings and the choices they make in life.” —Al-Itihad

In this allegorical novel from controversial Egyptian journalist Aziz, a failed political uprising leads to the establishment of a totalitarian regime known as the Gate, whose principal means of control is making its subjects wait in an endless line, the titular queue. A young man, Yehya, is shot by riot police during the revolt, an act of violence that the Gate flatly refuses to acknowledge, and much of the novel's story revolves around the unrecognized bullet still lodged in Yehya's gut. The large cast of characters includes Tarek, a conflicted physician; Nagy, Yehya's devoted friend; and Amani, a woman who puts herself at great risk to get Yehya the surgery he desperately needs. At its best, the novel captures a sense of futility and meaninglessness, but its impersonal tone and uneventful middle contribute, at times, to a lack of urgency. This sense is remedied, albeit too quickly, in a strong finale in which Tarek races along the queue to rescue a dying Yehya. Aziz ultimately suggests the worst while leaving the smallest space for hopeful interpretation, a fitting metaphor for Egypt after the Arab Spring. (May) --This text refers to an out of print or unavailable edition of this title.

BASMA ABDEL AZIZ is an Egyptian writer, psychiatrist, and visual artist. Early on, she earned the nickname ‘the rebel’ for her indefatigable struggle against injustice, torture, and corruption. A weekly columnist for Egypt’s al-Shorouk newspaper, she represents a fresh and necessary female voice in Arabic journalism and fiction. She is the winner of the Sawiris Cultural Award, the General Organisation for Cultural Palaces award, and the Ahmed Bahaa-Eddin Award. She lives in Cairo. --This text refers to an out of print or unavailable edition of this title.
Read more

4.1 out of 5 stars
4.1 out of 5
84 global ratings
How are ratings calculated?
To calculate the overall star rating and percentage breakdown by star, we don’t use a simple average. Instead, our system considers things like how recent a review is and if the reviewer bought the item on Amazon. It also analyzes reviews to verify trustworthiness.
Top reviews

Taleb
5.0 out of 5 stars Absolutely intriguing
Reviewed in the United States on July 5, 2016
Verified Purchase
This book is an amazing treasury of the nerves feelings and trepidation that we all feel about governance in intrusive countries. I cannot believe that the author was able to touch this nerve exactly. Very thoughtful and an excellent read. Thanks for writing this. I will recommend this book for my children.
Read more
One person found this helpful
Helpful
Report abuse

Ann Muir
5.0 out of 5 stars Deeply real.
Reviewed in the United States on September 28, 2017
Verified Purchase
Powerful. This will make you think about your life.
Read more
Helpful
Report abuse

David
5.0 out of 5 stars A great foray into the uncanny
Reviewed in the United Kingdom on June 11, 2020
Verified Purchase
Yehya Gad al Rab Saeed is seemingly shot, and seeks assistance from sympathetic Dr Tarek, who is unable to continue treatment without an authorisation from the mysterious Gate; Yehya joins the queue outside the Gate, which never seems to advance. A group of friends try and fail to understand the malevolent forces around them. In this kafkaesque masterpiece, the Gate is the castle, and the various hospitals conspire to thwart patients and doctors alike. This ought to be a hugely famous novel — I cannot think why it is not.
Read more
Report abuse

Steve
4.0 out of 5 stars Disappointing Dystopia
Reviewed in the United Kingdom on October 10, 2017
Verified Purchase
In The Queue, Egyptian author Basma Abdel Aziz creates a fictional Middle Eastern country in the aftermath of a fictional Arab Spring. Appearing unannounced after a popular uprising, the Main Gate of the Northern Building regulates daily life through a system of paperwork, permits and authorisations. Everything – eating, drinking even window shopping – is subject to its control. With it now in place, the ruler fades from public view, leaving behind three new security units: a Deterrence Force to guard the Gate, a Concealment Force to guard the military-run Zephyr Hospital and a well-armed Quell Force to suppress riots. After a second wave of protests (propagandistically dubbed the Disgraceful Events) is crushed, the Gate is closed. Life comes to a halt and an enormous queue forms, waiting for it to reopen. Among them is Yehya Gad el-Rab Saeed, shot during the Disgraceful Events and desperately in need of medical attention to remove a bullet lodged in his abdomen – only removing bullets without permission from The Gate is a criminal act, for The Gate has decreed no shots were fired that day….

Being a fan of dystopian literature, I really wanted to like the novel, yet it never developed into a compelling story. For me, it was held back was the thin characterisation. Beyond a desire to obtain Yehya’s X-rays, they lacked any strong motive, which seemed surprising giving the turbulent events. Most frustratingly, they were never allowed to speak, with the narrator telling us what they said, how they felt and what they did, deadening the story. The ending in particular felt like a damp squib.

A modern-day Egyptian take on dystopia, The Queue is certainly worth reading. However, I can’t help feeling it could have been so much more.

Laku08
5.0 out of 5 stars Great dystopia
Reviewed in Germany on March 30, 2017
Verified Purchase
This story is a great dystopia. Somehow 1984-like, somehow frightening real and imminent. Although literarily not incredibly well written, this book is gripping and you cannot stop reading.
Read more
Report abuse

Maryln Dsouza
3.0 out of 5 stars No page numbers!
Reviewed in India on September 6, 2020
Verified Purchase
Very surprised that this Kindle book doesn't have page numbers. I bought it to do an assignment but the absence of page numbers made the purchase useless.
Read more
Report abuse
See all reviews