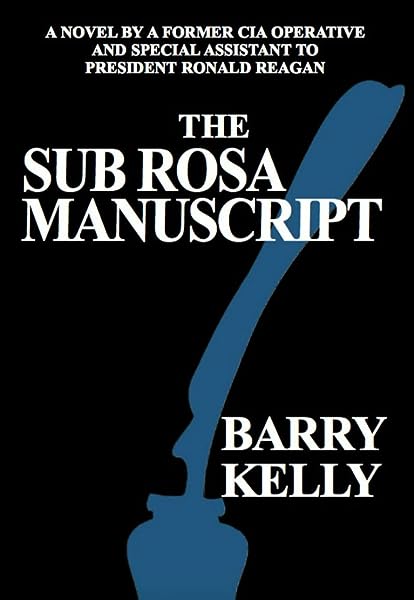 Barry Kelly is no stranger to the world of espionage, counter-terrorism, weapons, martial arts, clandestine tradecraft, deep cover, black operations, para-military operations, and the inner workings of the governmental security apparatus. Twenty-seven years of government service provided hands-on experience in all of these areas. His immersion in the Cold War began with enlistment in the U.S. Navy during the Korean War. A magna cum laude BA from the University of Pittsburgh and a master's degree from Duke University, through the James B. Duke Fellowship Program followed his discharge from the Navy. Kelly's experience in the CIA included deep cover operations, a wide spectrum of agent operations, overseas experience primarily in South and Southeast Asia, a tour as the station chief in Moscow and TDY excursions to the Middle East and the Far East. A volunteer assignment in Vietnam resulted in the award of two medals by the Government of South Vietnam for service in the five northern provinces, one of which is The Cross of Gallantry with Silver Star. The author held command positions in three Directorates of the CIA. He was awarded the Certificate of Merit with Distinction, the Intelligence Medal of Merit, the Distinguished Intelligence Medal, and the first Intelligence Officer of the Year Award. After retirement from CIA, Kelly responded to a call from the White House to fill a position on the National Security Staff as a Special Assistant to President Reagan in the last two years of his administration. He was responsible for all intelligence activities and opertions, including counter-terrorism and covert action. In this position, he chaired the weekly meetings of the top counter-terrorism committee in the government. Barry Kelly has had a lifelong interest in martial arts. He holds a first dan black belt in Hap-ki-do. Born in western Pennsylvania, he now lives with his wife, Joan, and their dog,Rip,in South Carolina, a true warrior state where service in the CIA is honored.

Start reading Quiet Justice on your Kindle in under a minute.

Once again I recommend another Kelly novel, ISIS: QUIET JUSTICE (Prose Press). From my perspective, Barry Kelly’s books are noted for insight.

QUIET JUSTICE is provocative and raises numerous substantive issues. Kelly places the failure of our government to deal with ISIS on the shoulders of liberals in US leadership. Kelly questions the ability of constitutionally designated agencies to deal with terrorism both here and internationally.

QUIET JUSTICE might be considered Kelly’s manifesto or fictional declaration to deal with terrorism. The Brandon Series continues Kelly’s premise: America is on the brink of a leadership crisis.

Brandon, the pivotal character, leads an illegal domestic operation(s), a prelude to a eliminating a foreign target. The “Fist”, is a key ISIS leader living in Fallujah. Brandon has the CIA’s implicit approval.

The CIA is “officially” prohibited from conducting domestic operations within the United States. They are mandated to coordinate information with domestic agencies through Homeland Defense including the Secret Service and FBI. Brandon and associates operate on the periphery of the Constitution and US laws to “protect American freedoms.” Do such activities in turn negate the very freedoms we cherish? Again, Kelly attributes America’s crisis with ISIS and terrorism to US liberals.

Reflecting on the role the intelligence community played in deciding to invade Iraq, Karl Rove, former advisor to President George W. Bush commented: The decision to invaded Iraq was based upon faulty intelligence information including the CIA. Specifically, Rove pointed to the reports of “weapons of mass destruction.”
Interviewer Charlie Rose asked Rove, “Would the US have invaded Iraq knowing what intelligence is available today?”
Rove answered in effect: Probably not. Again, President Bush acted upon intelligence reports.
Rove also remarked: the Bush administration’s “De-Ba’thification” of the Iraqi civil service after the invasion embittered the Sunnis.

QUIET JUSTICE underscores an on-going controversy within the intelligence community. A total reliance on intelligence gathering using drones and electronic surveillance simply is not working. Nothing will replace human intelligence gathering from the “inside.” Covert operations demand the highest “expense”. The Allies were able to intercept top-secret dispatches from Nazi Germany’s high command to U-boat wolf packs hunting Allied vessels. Still the bulk of our intelligence came through covert operations carried out by partisans, Allied spies, and our own OSS operating behind enemy lines. Many were captured and executed. In today’s world of ISIS-beheading-executions one wonders who will volunteer to go “inside”?

Christopher Hayes, author of TWILIGHT OF THE ELITES: America After Meritocracy (Broadway Paperbacks) writes: “…our leaders are more “prone to failure and corruption and more out of touch with the people they govern.” Hayes’ conclusion: “the public’s loss of trust in the federal government, corporate America, and the media has led to a crisis of authority that threatens to engulf not just our politics but our day-to-day lives.”

Quiet Justice is not as well written as the classic Brandon novel: RUN TO FREEDOM (Prose Press). Nevertheless it warrants a read. Barry Kelly is a man to be admired and thanked for his meritorious service to America. ISIS: QUIET JUSTICE holds significant warnings for our citizens and leaders. Kelly’s tale is alarming. Americans are confronted with terrorism almost daily from fundamentalists, individual discontents and psychotics. The list grows.

I leave the reader with one question. Are we now living in a country ruled by “Quiet Justice?”