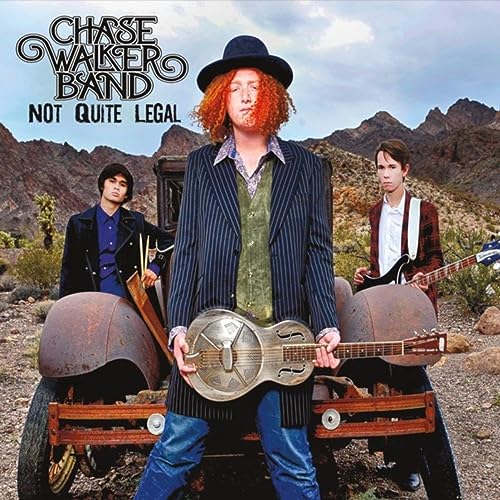 Not Quite Legal [Explicit]

B. Harrison
4.0 out of 5 stars Four Stars
Reviewed in the United States on October 14, 2016
Verified Purchase
enjoyable if not a bit repetitive
Read more
One person found this helpful
Helpful
Report abuse

Bman's Blues Report
4.0 out of 5 stars Revved Up Records artist: Chase Walker Band - Not Quite Legal - New Release review
Reviewed in the United States on May 10, 2016
I just received the newest release, Not Quite Legal, from the Chase Walker Band and it's tight. Opening with solid radio track, Done Loving You, Chase Walker on guitar and vocal, shows considerable maturity of style in his guitar playing, joined by Matt Fyke on drums and vocals and Randon Davitt on bass and vocal. Winding it way down, Jimi Hendrix's, Red House, is opened delta style on metal resonator guitar, but grows into a slow, back beat driven blues with distorted vocals and overdriven electric guitar. This is not close to anything that I've heard that Jimi ever did. Really nice! The Walk is a cool blues rocker with thumping bass and cowbell (how can you go wrong!). This track has a lot of polish, and slick guitar riffs with great lyrics ... could be the strongest composition on the release. New State Of Mind has a bit of Tom Petty and dash of Neil Young blended into fresh eyes. A country style rocker with a strong melody, features Jade Bennet-Mateo on backing vocals and Drake Munkihaid Shining on keys. I Warned You maintains a modern southern rock feel and solid vocal blending with clever guitar riffs and rhythmic key work. Cold Hearted is another of my favorites on the release with interesting chord patterns. With definite radio potential because of it's catchy melody and super vocals, this is just a super all around track. These artist have a real familiar sound and on Don't F It Up it's another super melody with nice instrumentation and strong vocal backing. Walker breaks out nicely on guitar but containing his work inside of 5 minutes. Very nice! 54-46 falls back into a ska or reggae feel. A solid bass solo by Davitt adds a nice touch but again backing vocals play a strong part in the appeal in this track and I feel certain it should bode well with audiences. Changed has a bit of the early English pop sound with Davitt on lead vocal and some of the most aggressive guitar work on the release. Very nice! It'll Pass has the feel of early CCR (to me) and with solid bass and drum work, Walker shows strong guitar riffs in supporting of his own vocals. Honey Jar actually reminds me of a Captain Beefheart song with a modern twist. Cool track. Living On Thin Ice is a bright rocker with a driving bass line and heavily distorted guitars. Closing is an untitled jam with some great guitar highlights. Nice closer to a super sophomore release.