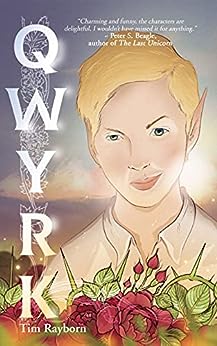 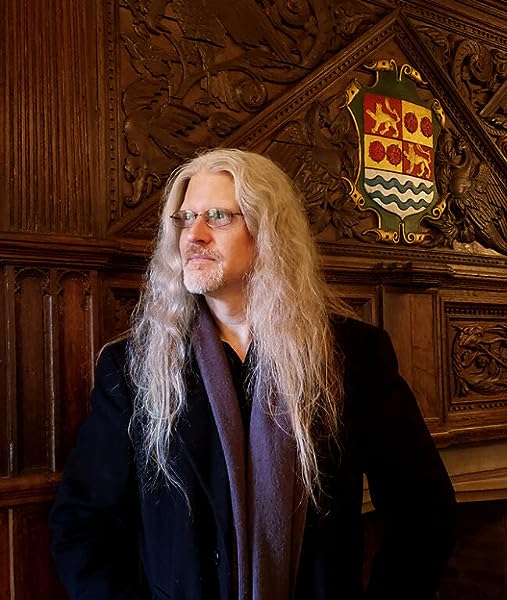 by Tim Rayborn (Author) Format: Kindle Edition
Part of: Qwyrk Tales (2 books)
See all formats and editions
Sorry, there was a problem loading this page. Try again.
Qwyrk is having a bad day; several, in fact. One of the Shadow folk tasked with keeping an eye on humanity, she's ready for a well-earned break in Yorkshire, but now she's (literally) run into a girl, Jilly, who just saw something quite supernatural and truly awful happen in her town. As Qwyrk tries to unravel the mystery, layers of villainy are exposed, and she's stuck with an assortment of unlikely folk that she'd rather not have "helping" her. Together, they confront ancient magic, medieval conspiracies, and the possible end of the world (that again?). It's not the holiday Qwyrk was hoping for!

QWYRK is the first in a series of four novels about the adventures of a group of misfits at the edge of reality in modern northern England, a world of shadows, Nighttime Nasties, sorcery, intergalactic councils, tacky nightclub attire, Monty Pythonesque humor, and even elves... though they are a bit silly.
Read more
Previous page
Next page

Next 2 for you in this series See full series
Total Price: $9.86
Books In This Series (2 Books)
Page 1 of 1Start OverPage 1 of 1
Previous page
Next page
Qwyrk Tales
Tim Rayborn
Kindle Edition

Described as a literary raconteur and a virtuoso, Tim Rayborn denies everything, but it's true that he's a versatile writer and an acclaimed musician. He's written a few dozen books, appeared on more than forty recordings, plays scores of unusual instruments, and has visited five continents. QWYRK is his first novel. --This text refers to an out of print or unavailable edition of this title.

"I liked this book a great deal! Charming and funny, the characters are delightful, and it's scary exactly where it should be. I wouldn't have missed it for anything."

"Qwyrk, by Tim Rayborn, is, for starters, delightfully... quirky. Rayborn's ear for culture is as good as his ear for music, and his fantasy romp through a small British town has some of the same wacky flavor we find in the mythic send-ups written by Tom Holt/K.J. Parker. Rayborn's elves may be updated, but human nature remains the same. As Qwyrk herself tells Jilly, her kind visit our world 'To give children a little nudge when they need it... and sometimes remind adults of what they've been missing.' In times when we all need distraction, here is a tale to take your mind off your troubles for a while."

"It's a quest, it's a lark that romps through human and magical worlds alike, and it's a whimsical and delightful story set in Northern England. Qwyrk is engaging, endearing, and unpredictable in its human and magical relationships and conundrums. Fans of fantasy who enjoy magical realism injected into the everyday milieu of Britain will relish the nature of Qwyrk, first in a projected series of stories about misfits and the sometimes-hilarious mishaps that evolve from seemingly good intentions."

"Bringing the familiar modern world together with the fantastic and mythical in a smart and witty way, Qwyrk is a delightful foray into magical realism. Fans of Pratchett, Gaiman, Beagle, and de Lint will absolutely feel at home in this story! Rayborn takes figures from traditional folklore and gives them a wonderfully fresh and believable update. You'll be hooked right away on both the human and magical characters - they're engaging and familiar in such a way that you simply must know what happens next. Strong and capable female characters, the challenges of negotiating magic in a world that's largely forgotten it, effective world-building, and a good dose of sarcasm all make this book such a fun read. I can't wait to read more about the further adventures of Qwyrk!

"You will never look at a rose bush the same way again! A fun romp through a modern English fairy encounter, written with a light heart, a clever mind, and a wicked sense of humour. Enjoy!"

Elizabeth Kerner Ewing, author of Song in the Silence, The Lesser Kindred, and Redeeming the Lost

Tim Rayborn is a historian, medievalist, and musician, with an MA and PhD from the University of Leeds in England. He is a writer on a variety of topics in history and the arts, from the academic to the amusing to the appalling. A professional musician with a specialty in medieval repertoire, he plays dozens of musical instruments, has appeared on more than 40 recordings, and has performed in the US, Canada, Europe, and Australia. He lives in Northern California.

Anthony Avina
5.0 out of 5 stars A beautifully written, engaging, and mesmerizing YA Fantasy and LGBTQ-Supernatural tale...
Reviewed in the United States 🇺🇸 on July 11, 2021
I received a free copy of this book in exchange for a fair and honest review. All opinions are my own.

This was a truly well-developed first entry into a brand new fantasy series. The author doesn’t waste time delving into this supernatural world, where the creatures of myth and legend live hidden in the shadows of our own world. The balance of mythology that the author has crafted and brought to life through the characters of this narrative and the unique humor that helps define the relationships between these characters was exciting to read.

The action of this novel was perfect. Jilly was a great character, as she served to bring humanity into the larger-than-life supernatural mischief that the protagonists faced along this journey. Personally, it was the author’s setting that really had me hooked. While I am a huge fan of YA Fantasy and LGBTQ-driven narratives, as well as mythology, I am an even bigger fan of the UK and loved seeing the interactions and the way the setting impacted the character’s personalities as well.

A beautifully written, engaging, and mesmerizing YA Fantasy and LGBTQ-Supernatural tale, author Tim Rayborn’s “QWYRK” is a must-read first entry into a brand new, modern-day fairy tale series. The action and mythology really helped to bring this narrative to life, and the characters kept the reader invested as the villain and hero rose to light. If you haven’t yet, be sure to grab your copy of this incredible read today!
Read more
Helpful
Report abuse

C. Byrne
5.0 out of 5 stars Witty, Original Exciting, A Perfect YA Fantasy Novel in a Classic Mode
Reviewed in the United States 🇺🇸 on July 11, 2021
What a welcome summer read this is! Rayborn's first novel is a fantasy adventure that's very much a sophisticated not-to-be-put-down, YA novel. It recalls the classics in this form with Rayborn's sophisticated--and sometimes meta--take that is suspenseful, well-plotted and sometimes laugh-out-loud funny.

It's the tale of a young girl Jilly (who will remind many of Roald Dahl's Matilda) who is smart, resourceful and ignored by her parents, which actually works to her advantage when she goes off on a supernatural adventure and with the help of some charming and engaging characters, manages to save the world in just a couple of days. Add in a dash of Lemony Snicket, a bit of Madeline L'Engle and Oliver Butterworth, and you've got a witty, breezy read that is nonetheless completely original and contemporary.