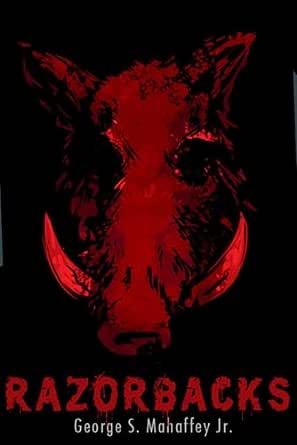 You've subscribed to RAZORBACKS! We will preorder your items within 24 hours of when they become available. When new books are released, we'll charge your default payment method for the lowest price available during the pre-order period.
Update your device or payment method, cancel individual pre-orders or your subscription at
Your Memberships & Subscriptions
There was an error. We were unable to process your subscription due to an error. Please refresh and try again. 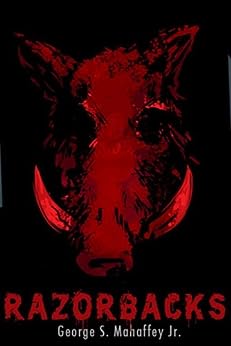 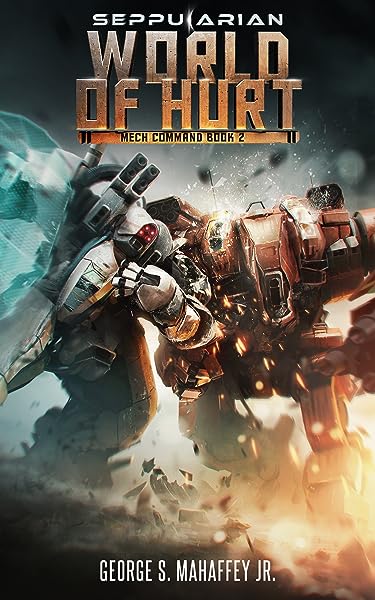 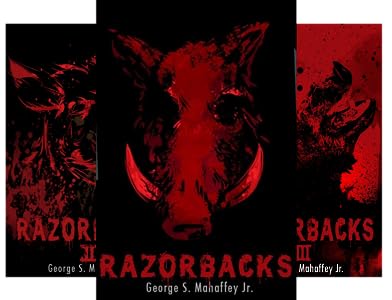 4.3 out of 5 stars
4.3 out of 5
67 global ratings
How are ratings calculated?
To calculate the overall star rating and percentage breakdown by star, we don’t use a simple average. Instead, our system considers things like how recent a review is and if the reviewer bought the item on Amazon. It also analyzes reviews to verify trustworthiness.
Top reviews

Silver Screen Videos
3.0 out of 5 stars Whole Hog
Reviewed in the United States on April 20, 2017
Verified Purchase
I have only been really and truly scared one time in my life, and that occurred on a hike in an isolated part of the North Georgia woods when a wild hog, tusks and all, charged straight at me (the hog was actually chasing my dog who was running back to me for safety). Fortunately for both my dog and me, the hog veered away at the last minute, but I have always had a fascination (and healthy respect) for wild hogs ever since. Naturally, I was attracted by the premise of George Mahaffey's "Razorbacks," a horror thriller that, at its best, recalled my own experience but which also sometimes settled for descriptions of gore rather than genuine frights.

The main characters of "Razorbacks" are Avery and Peter, a father and 13-year-old son on the run from the law and a rather sticky domestic situation involving Peter's mother, a crackhead meth dealer. It would seem that leaving the mother's meth lab and sleazy boyfriend behind would have to be an improvement for Peter, but, instead, things get worse quickly. Avery and Peter are caught in a major sandstorm on a West Texas freeway and become part of a massive multi-car pileup that results from the diminished visibility. They and the handful of fellow survivors they encounter in and amongst the wreckage think that all they need to do is sit tight and ride out the storm. Instead, they soon find that there are a number of extremely large, extremely hungry hogs in the vicinity.

“Razorbacks” is a 100-page novella (that could easily have been made into a creenplay), so there’s not a lot of room for character development here. Most of the characters, other than Avery and Peter, are merely sketched in with a single dimension, and the only time the author gets into their thought processes is usually immediately before their rather gruesome demise. For this book, however, that’s not all that much of a drawback, since the emphasis is on the action and shock. To set the stage for the final confrontation between man and beast, author Mahaffey creates a good, albeit somewhat far fetched playing field. The substantial number of wrecked vehicles affords people plenty of places to hide in, under, or on top of while the pigs try to get to them. In addition, being Texas, there are a few firearms on hand, as well as some implements in some of the vehicles that the survivors transform into makeshift weapons of various sorts.

Although “Razorbacks” has plenty of action, the book is at its best in the early stages, before the people become aware of just what’s out there, instead glimpsing things in the wind and sand. There’s a great scene in which one character allows a pet Chihuahua on a leash to go for a walk into the storm, and the predictable result still manages to be shocking. But once the battle begins in earnest, Mahaffey increasingly foregoes suspense in favor of rather graphic descriptions of gore. Apparently, these hogs have a craving for fingers, since several characters wind up getting fingers bitten off. Similar anatomical details are also described in gruesome depth.

I’m no prude, and I’m not opposed to graphic content in a book, but the effect of this sort of description in “Razorbacks” is numbing rather than shocking. After a while, the pattern of attacks, attempts at defense, and dismemberments becomes monotonous. It doesn’t help matters that there seem to be a nearly endless number of attacking hogs, even though the beleaguered people manage to dispatch several of them. This repetitive action and increasing casualty list goes on far too long, so that, by the time Mahaffey gets to the final showdown, I had nearly lost interest.

“Razorbacks” is a book that would have worked better at 50 pages or 250 pages rather than 100. At novel length, Mahaffey could have developed more characters. Alternatively, at a shorter novelette length, he could have oridyced a really taut thriller. Instead, he’s in the middle, with an interesting premise, a likable youthful protagonist in Peter, and action and suspense that go downhill fast after a solid start. When Mahaffey is on, as in the first few chapters of “Razorbacks,” the story is genuinely suspenseful. For that reason, I do recommend “Razorbacks” as an escapist horror adventure. But be aware, that, like many a prize hog, the book has a good bit of fat that could have been trimmed away.

laurathomas61
4.0 out of 5 stars Bloody good one
Reviewed in the United States on May 7, 2017
Verified Purchase
A long time ago I watched a movie called Razorback. It was about a killer wild boar. If you’ve never seen one, I can tell you from experience, having been treed by one, that they can get up to 500 lbs or larger, with huge tusks, the better to gore you with.

A man and his son risk driving through a dust storm and wind up in the middle of a huge pileup. Dead and injured people are strewn around and blood is all over the place. As the storm worsens, it brings something with it. A pack of wild boars, with an uncommonly large leader. They smell the blood and close in for the easy pickings. There’s no place to hide, so the survivors must get creative. As if they really stand a chance against these killing machines.

The author wastes no time, putting you right in the middle of a bloody hunt. From there you go on to meet a father and his son. They have quite a twisted story of their own. Once things got bad, the boy really stepped up but I had doubts about the father. Soon it doesn’t matter, as they can’t find these things off by themselves.

One plan after another goes wrong. It gets pretty gory, I’m telling you. Sad that some characters I thought a lot of were killed off quickly. Others took a while to meet their bloody ends.

And the wild boar. Whoa…were they something else. Ever seen the movie Hannibal? That scene with the man eating pigs gives you a good picture of what they can do. No cute little piggies in these pages.

Great start, genuine characters, and some mean ass animals. It’s all good. And I liked the ending. Kind of a nod to into the sunset.
Read more
One person found this helpful
Helpful
Comment Report abuse

rcdac
5.0 out of 5 stars Outstanding Story
Reviewed in the United States on September 23, 2014
Verified Purchase
RAZORBACKS by George S. Mahaffey is an outstanding story that will have you on the edge of your seat from start to finish. The main character is a thirteen-year old kid, named Peter that you can’t help but root for. He’s the epitome of anti-hero, a scrawny, physically-challenged, smarter-than-thou product of the trailer park.

Not only is the hero and an unusual character, but the villain is as well, a Hogzilla called Brown Muzzle. The monster feral hog leads a pack of other wild pigs that hunt down humans trapped by traffic pile-up on a West Texas highway in a sand storm.

Mahaffey also does a great job with the setting. He makes the sand storm another sinister character that helps and hinders humans and wild pigs alike. His descriptions are so well done that the reader can almost taste the dust.

At under a 100 pages RAZORBACKS is a novella, which I think is the right format for the story. It is short enough to be read in one sitting and believe me, you will want to read it in one sitting. Stretching it into a longer work would have smoothed out the twists and turns of the rollercoaster ride that it is and taken away from enjoyment of the story. And at a penny a page, RAZORBACKS is affordable entertainment and well worth its price.

James N Simpson
TOP 1000 REVIEWER
4.0 out of 5 stars Didn't Like the Start But Once the Car Pile Up Happens and the Feral Pigs Arrive, it's a Nice Read!
Reviewed in the United States on November 26, 2016
Verified Purchase
I found this story a bit hard to get into at the start, I actually put it down read something else then came back to it a few times. The lingo by the characters at the start also contained a lot of local slang words I wasn't familiar with. But once the father travelling with a young son he'd only really met that day decides to speed up and go around road workers turning cars around and rights off his own vehicle into the pile of wreckage and corpses, the fun begins. There's of course some bad weather meaning rescuers aren't going to be coming to the scene until it clears. Of course there are some hairy larged tusked bacon types only happy to clean up the mess. Of course they don't differentiate between meals already dead and those able to walk around. Food is food!

If you like the whole feral pig attacking humans thing, you should also check out the classic 1984 Australian film  Razorback .
Read more
One person found this helpful
Helpful
Comment Report abuse
See all reviews

Daisydolittle
3.0 out of 5 stars Feral razorbacks with a taste for human blood are on the rampage.
Reviewed in the United Kingdom on August 10, 2014
Verified Purchase
Peter was never met his Dad, but Avery turns up out of the blue. The 2 survive a car crash, but something worse is out there.

This was one of those books that had a great original story, but unfortunately didn't quite fulfil it's promise. Think my main issue was that the razorbacks were just not scary enough, nor was enough tension created in the storyline.

The Grim Reader
3.0 out of 5 stars 3.5 stars. Pretty good.
Reviewed in Australia on June 26, 2015
Verified Purchase
This was a pretty good tale in all. These razorbacks are a fearsome foe and there are some great scenes of gore. It's nothing new but if you are looking for a quick, action-packed read for very little coin then this is a good place to go. 3.5 stars.
Read more
Report abuse

as tenterfield up
5.0 out of 5 stars Five Stars
Reviewed in Australia on January 7, 2015
Verified Purchase
Different but kept you reading
Read more
Report abuse
See all reviews