Add to Cart
$19.55
+ Free Shipping
Sold by: Academic Book Solutions
Have one to sell?
Sell on Amazon 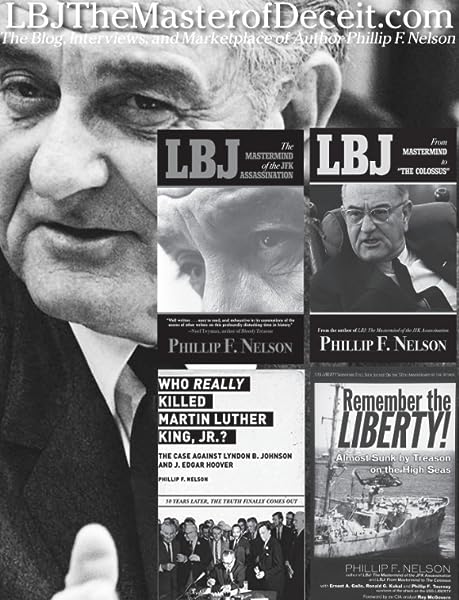 Who REALLY Killed Martin Luther King Jr.?: The Case Against Lyndon B. Johnson and J. Edgar Hoover Hardcover – May 1, 2018

"Phillip Nelson, who has generously complimented my work on the King assassination, has also provided us with some missing valuable historical information about the complicated actions of Lyndon Johnson in the context of events in the 1960's. I have long believed the detailed information given to me by my friend, Madeleine Brown, (LBJ's mistress) about his knowing involvement and collusion in the assassination of JFK. Phillip Nelson's research about Johnson's collaboration and his support of the profoundly illegal and evil, public actions of J. Edgar Hoover fills in many blanks and is a highly valuable historical contribution.
I urge, and hope, that this work will be widely read."

"Your book re Dr. King's assassination [Who REALLY Killed Martin Luther King Jr. -- The Case Against Lyndon B. Johnson and J. Edgar Hoover] presents a powerful argument. Very well done. I have always stated that the James Earl Ray scenario too was a well-orchestrated set-up".

Dr. Cyril Wecht, formerly the Allegheny County (PA) Medical Examiner and forensic pathologist who has examined the evidence and testified in many cases of celebrity deaths, including most notably of John F. Kennedy's.
_______________________________
"Phillip Nelson establishes that James Earl Ray was railroaded as a patsy to divert attention away from men in the highest councils of government who ordered the murder of Dr. King. No honest assassination investigator can fail to come to terms with Nelson's work.  Nelson's analysis of Operation MK-ULTRA, as it may explain elements of Ray's behavior, is fascinating. He has also significantly contributed to our understanding of Raoul, the shadowy figure who was Ray's handler for nine months prior to the assassination of Dr. King."

"Whether it's the JFK assassination or the 1967 attack by Israeli Defence Forces on the USS Liberty, by building on the important work of other authors, Phil Nelson has earned himself a well deserved reputation as a discerning seeker and curator of the real truth behind these seminal events in U.S. history. His new book on the 1968 assassination of Dr Martin Luther King is sure to enhance that reputation. A timely update on the circumstances surrounding his death, and a welcome corrective to the official narrative, Nelson's book is an indispensable read in this the 50th anniversary of his murder."
Greg Maybury, Editor, poxamerikana.com
__________________________________

"Phil Nelson has applied brilliantly the intelligence he has developed over the years, from researching the JFK assassination, to the assassination of Martin Luther King, Jr.
Finally, we have a detailed and convincing analysis of the role Lyndon Johnson and J. Edgar Hoover played orchestrating Martin Luther King's murder -- a murder that, like JFK's assassination, opened a dark Deep State chapter in American history that we are only now beginning to appreciate, hopefully to move beyond.  For decades, the mainstream media and conventional historians have cover-ed up LBJ and J. Edgar Hoover's role in killing two of the greatest political heroes in American history. After Phil Nelson's book, this will no longer be possible."
Jerome R. Corsi, Ph.D. Washington D.C. bureau chief of InfoWars and author of New York Times bestsellers The Obama Nation and Unfit for Command
__________________________________

I picked up this book with more than a little skepticism. Having been a voracious consumer of JFK and RFK assassination books, I thought I'd give Phil Nelson's Who Really Killed Martin Luther King, Jr.?: The Case Against Lyndon B. Johnson and J. Edgar Hoover, a try. I had already read most of the books about MLK's killing that Nelson cites in this work. And after all that, I had come to the conclusion that James Earl Ray had killed Martin Luther King. With the Kennedys' assassination, a conspiracy is easier to accept: It was the mafia, the CIA, Lyndon Johnson . . . etc. James Earl Ray's guilt, on the other hand, seemed to me to be more clear-cut. He was caught easily, he confessed, and his retraction of his confession seemed convenient and revisionist to me. I frankly put it out of my mind. That is, until this book.

Phil Nelson goes to the trouble that so many other authors do not, of using primary source and contemporaneous documents. Like Peter Janney's "Mary's Mosaic," he makes an argument that is both compelling and very difficult to refute. How do you argue against facts? None of us want to think the worst of our government and our leaders. But sometimes we should. Sometimes a sociopath will slip through the cracks. And sometimes those sociopaths become the director of the FBI or the President of the United States. The American people have a right to know the facts of our own history.We have the right to know who killed Martin Luther King, Jr. We have a right to know if our government was involved.

If it was, we have Phil Nelson to thank for shining some light on that awful crime [edited copy].

John Kiriakou is a former CIA officer and former senior investigator for the Senate Foreign Relations Committee. He served two years in prison after blowing the whistle on the CIA's torture program.

This book, together with the three previous efforts, represents a major part of my life over the last decade and a half, from the point at which I decided to write what I felt was a more accurate, brutally honest, and politically incorrect account of Lyndon Johnson's ascension to the presidency -- and the reign of terror that followed.  For many years, as I worked in the corporate world, I longed for someone more talented and articulate than me to write the "real" history of the turbulent 1960s and of President Johnson's historical imprint, "bark and all" as he used to (paradoxically) say. For a time--after Robert Caro's first two books were published--I thought that he would fill that void.  Unfortunately, his last two books effectively changed my perspective on that point.
My decision to begin my own research began at a very specific time:  in late November, 2003, when I saw the broadcast of Episode No 9 of the History Channel's "The Men Who Killed Kennedy," titled "The Guilty Men."     Before long, it became clear that many people were more than just a little upset about how that show shined a spotlight on the 36th POTUS as had never been done before.  It was quickly shut down and the History Channel forced to agree never to broadcast it again -- not just Episode 9, but the other two new episodes (7 and 8) as well. That action came as the remaining sycophants from Johnson's reign (led by Bill Moyers, Jack Valenti, Lady Bird Johnson), joined by Jerry Ford and Jimmy Carter, took action akin to the book-burning rituals and Salem witch trials used as the ultimate remedies by authorities in bygone ages.   Fortunately, all three of the videos noted (and the previous six) are still available for purchase or free viewing on various internet sites.
It was the voice of Edgar F. Tatro that captured my attention the most in that video, and I have him to thank for being my inspiration in completing the previous books, and this one, which will be my final attempt to "rewrite history" in a way that I believe will eventually be proven to be one of the truest to the actual actions taken by people in real-time during the decade beginning at the point Lyndon B. Johnson forced his way onto the Democratic ticket as John F. Kennedy's running mate, July 15, 1960 and ending when he left after his one (and a quarter) term as president, on January 20, 1969.
The following is excerpted from the last pages of the Epilogue of "Who REALLY Killed Martin Luther King Jr.? -- The Case Against Lyndon B. Johnson and J. Edgar Hoover":
_______________
Thanks in large part to the countless hours and the meticulous, indefatigable work of the many earlier researchers and authors cited throughout this book, we now know that James Earl Ray took the fall for a very sophisticated murder plot, of which he was completely unaware until after it was executed. We also know now that--in every so-called investigation by federal, state, and local law enforcement agencies--there was an explainable reason for why no real attempt was ever made to even acknowledge Ray's repeated pleas to find the man named "Raoul," who had guided him for nearly twenty thousand miles around the North American continent. There were many missed opportunities to follow that lead, even by the simplest measures, such as tracing the telephone numbers that Ray provided to his attorneys. The only serious work, of sorts, was the felonious attempt by the FBI--and later, to an even greater and more outrageous level, the absurdly counterproductive attempt by the HSCA--to deviously pin the Alton, Illinois, bank robbery on James, followed by a whole string of later  bank heists allegedly done by his brothers--all equally baseless--to try to prove that "Raoul" was really a composite of his brothers Jerry and John.
Furthermore, we know that in addition to the participation of the Dixie Mafia in the plot, there were two sniper teams associated with the 902nd and the 111th MIGs; there were also numerous signs of the CIA's involvement, and the fact that the FBI was the guiding force throughout virtually all facets of the murder and subsequent cover-up. We know that all of it stemmed from a long-planned, highly coordinated, well-executed plot that brought all of these elements together under the auspices of well-placed politicians and employees of the federal, state, and local governments. We even know the names of the men, from the top of the hierarchy through the middle levels and down to the local, street-level operatives--most of whom have been named in the previous chapters--responsible for the murder of Dr. King.
The only thing we don't know is how much longer this shamefully despicable lie--putting the blame on an innocent, vulnerable man who was set up months, even years, in advance--can remain in the nation's most secret closets. But it should now be understandable to all that the longer the nation's foundation continues to rest upon fabricated myths, built on top of fractured and crumbling truths--compounded with a patchwork of new, ever-greater lies to extend the original cover-up--the weaker and more vulnerable it will become.

Phillip F. Nelson is the author of Skyhorse’s LBJ: The Mastermind of the JFK Assassination and LBJ: From Mastermind to “The Colossus.” He currently lives in South Carolina.
Read more