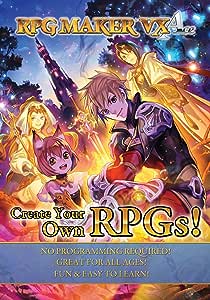 Brand: Enterbrain
Platform : Windows Vista, Windows 8, Windows 10, Windows XP, Windows 7
1.0 out of 5 stars 1 rating
Currently unavailable.
We don't know when or if this item will be back in stock.
Note: You can access this item in Your Software Library. The number of computers eligible for installation may vary.
By placing your order, you agree to our Terms of Use.
This product is non-returnable and non-refundable.

RPG Maker VX Ace is the latest in a long line of video game engines created by Enterbrain to create 2D tile based PC RPGs (Role-Playing Games). Have you ever felt like making games was only for teams of programmers, artists, and writers, or maybe a single ubermensch of game making skills? Have you dreamed of making a game with the story you want, the characters you created, the battles you choose? With our program, we can show you that the former isn’t true and the latter is something within your grasp.Our program is easy enough so that anyone, regardless of experience, is able to create their own games. Using an easy point and click eventing system, most game behaviors can be created with no programming knowledge at all.

RPG Maker VX Ace also allows incredible versatility and customization for advanced users through RGSS3, a scripting system based on the Ruby programming language. Because of this approach, RPG Maker VX Ace has been used successfully by everyone from young children to commercial independent game developers. RPG Maker VX Ace comes pre-packed with a large collection of high quality graphic and audio resources, so that you can jump right into making your game. And if those aren’t enough, you can easily import new resources, whether you made the resources yourself, found them online, or bought official RPG Maker expansion packs, with just a few clicks of your mouse. Let’s explore the parts of the editor you will use to make your game.

RPG Maker VX Ace Database
Within these digital walls, you will create:

RPG Maker VX Ace Map Editor
In the map editor, you will create the world your characters will explore. Using the tiles that come with RPG Maker VX Ace, you can easily create almost any fantasy environment you can dream up, from a castle in the snow to a forest to a city in the desert. All that is needed to make a map is to select the tiles from the palette and then clicking where you want it to go on the map. It is as easy as using Paint! The tilesets included with VX Ace include:

RPG Maker VX Ace Event Editor
The event editor controls the flow of your game. You will use it to create NPCs, traps, puzzles, shops, cutscenes, and pretty much any other thing that you can imagine a player interacting with on your maps. Creating events is as easy as switching to the event layer in the map editor, selecting where you want one, and hitting new event. From there you will tell RPG Maker VX Ace what you actions you want the event to do using Event Commands, a list of selectable commands with clear names like “Message”, “Transfer Player”, and “Shop Processing”. Combining commands you will be able to guide your hero through his journey with ease.

Script Editor
The Database, Map Editor and Event Editor can sometimes only go so far. With the power of the Script Editor, nothing can stand in your way. Want to make an entirely new battle system? Want more or maybe even different equipment slots? The Script Editor can do all of this and more if you unlock its secrets. Using RGSS3, based on the Ruby programming language, you can alter almost any portion of the way your game works. Don’t think you have what it takes to make your own scripts? That is okay. The modularity of RGSS3 scripts allows you to find fan scripts from all over the internet and just copy and paste them into your game.

Alexandria O. Thompson
1.0 out of 5 stars Hours of lost progress
Reviewed in the United States on November 15, 2018
Platform: PC Online Code
The Steam App keeps switching back and forth between online and offline mode, often times forcing a shutdown that does not prompt a save. I have lost countless hours of work trying to get their terrible customer support to help, often times they'll just say the issue is resolved and will do absolutely nothing to fix the problem. Avoid this version, Valve's customer support does not care about your issues.
Read more
Helpful
Comment Report abuse
See all reviews from the United States
Pages with related products. See and discover other items: video maker software pc, computer programs for windows 10, windows 7 game programs