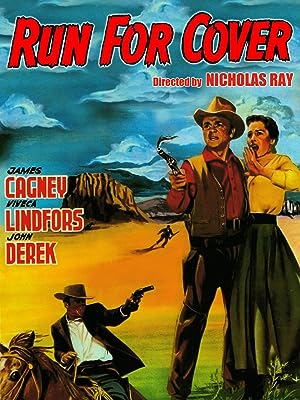 (154)
6.71 h 32 min19557+
A convict (James Cagney) just released from prison becomes sheriff of a western town after being mistaken for a train robber.

B. CatheyReviewed in the United States on June 8, 2012
5.0 out of 5 stars
Cagney's best Western
Verified purchase
Jimmy Cagney starred in three Westerns during his long acting career---OKLAHOMA KID, TRIBUTE TO A BAD MAN, and RUN FOR COVER. Of these RUN FOR COVER is his best outing as a cowboy. This handsomely-produced, Nicholas Ray-directed film also stars John Derek, with a solid cast of recognizable Western "regulars." The film is shot in spectacular Technicolor, with a solid and tight plot, fine acting, and great production values.

Olive Films has been releasing quality issues of a number of classic 1950s Westerns licensed from Paramount Pictures. In this series are DENVER & RIO GRANDE, SILVER CITY, THE JAYHAWKERS, PONY EXPRESS, THE HANGMAN, and THE NIGHT OF THE GRIZZLY, all of which repay re-viewing. Let's hope Olive will continue this series with such fine films as WARPATH (also with O'Brien, and directed by Bryon Haskin) and FLAMING FEATHER (with Sterling Hayden), and other other films with Charlton Heston, Alan Ladd and John Payne.

In the meantime, this film is highly recommended--it's first class Western entertainment. Thanks Olive!

Richard W. HainesReviewed in the United States on February 1, 2003
3.0 out of 5 stars
Campy action film with funny cameos
Verified purchase
"Run for Cover" is a campy action film using the terrorist on the loose in New York City plot. What makes it fun is all of the cameos. It was a little like "The Blues Brothers" in that respect. Batman Adam West, Viveca Lindfors from Stargate, Al Sharpton, Lynn Samuels, Curtis Sliwa and even Ed Koch all pop up at the most unlikely moment. The Sliwa scene made me laugh when he called the terrorists "dope sucking psychopathic killing machines". Ed Koch was also good as the mayor. At the end of the movie Batman calls his assistant 'Robin' which also made me chuckle.
In the credits it says that the movie was shot in 3-D. This version is not in 3-D but it's still fun to watch. I smiled when I saw all of the close-ups of things coming at the camera.
Bombs, guns, antennae, camera, water and a homeless man's dirty feet which was gross. Very campy. In the credits the terrorist circles Manhattan in a helicopter looking for a place to blow up. He circles the Twin Towers which was creepy.
The plot has some twists which were interesting. Thomas Dunne looks like William Defoe and is pretty good. The terrorists all speak with fake accents like Hogan's Heroes but that was part of the fun. The music is very good and the theme catchy. It stuck in my mind after the movie was over. The editing was clever too.
I like the last shot when the hero turns off the radio and the movie at the same time.
The stills have some shots of Adam West and Ed Koch on the set.
Too bad they didn't have Sliwa and Sharpton too. The trailer is a riot. The commentary by the director was interesting and there were some funny stories. I liked the one about Adam West and the cop and Koch and the monster. It doesn't look like the commentary matches the picture but it was fun to listen to anyway. The photography is sharp and the colors vivid. The stereo is okay but there are no surrounds. I thought it was a fun DVD, especially with the commentary and trailer.

Dr. MorbiusReviewed in the United States on October 13, 2012
5.0 out of 5 stars
Spectacular Vistavision....
Verified purchase
Many have been disappointed with this western because it didn't seem like a typical Nicholas Ray film, but there is nothing disappointing about this one.... James Cagney didn't seem to fit too well in his first western, but he's right at home here....spectacular Vistavision scenery and a great story make this one of the best....the colors are incredible.... Definitely worth it for those who haven't seen it.... Cagney is fantastic and Ray's direction is superb as usual....there are no extras, but the audio and video make up for that.... If you love westerns, get it....
5 people found this helpful

Kenneth B. BarrettReviewed in the United States on October 2, 2012
5.0 out of 5 stars
Run for Cover
Verified purchase
I saw this movie in the early fifties and thought it was great. Well things haven't changed in all those years,it still holds a a great punch today. The photography of the country is magnificent and the story line is powerful. Great to see olive bringing back so many of these Paramount classics.Vista Vision was the go back then. Thank goodness we now have Blu-Ray.A great print.I look forward to seeing a lot more of these Paramount Classics.Keep up the good work Olive .

kellieReviewed in the United States on February 22, 2022
5.0 out of 5 stars
Must Watch
Verified purchase
Watch it for yourself,you’ll know what I mean👍🏼👍🏼😃

Feisty GrandmaReviewed in the United States on August 27, 2021
5.0 out of 5 stars
James Cagney
Verified purchase
I loved this movie it was filmed in Silverton Colorado. Our home town.My parents and siblings were in it I was too young.

Dr. VideoReviewed in the United States on June 5, 2013
4.0 out of 5 stars
Cagney Goes West
Verified purchase
After a long hiatus from doing western films, James Cagney made this film in New Mexico. The film is gorgeous especially on blu-ray. The story is about a mature gunfighter that comes to small ranch and is looking to settle down after having a troubled past. He is confronted by a boneheaded youngman who is played by a young John Derek. He spends the rest of the film trying to save the kid from himself. This is good saddle drama.
One person found this helpful
See all reviews
Back to top
Get to Know Us
Make Money with Us
Amazon Payment Products
Let Us Help You
EnglishChoose a language for shopping. United StatesChoose a country/region for shopping.
© 1996-2022, Amazon.com, Inc. or its affiliates