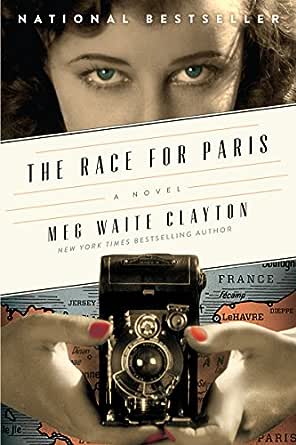 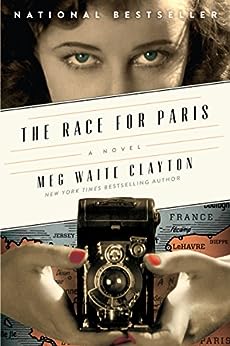 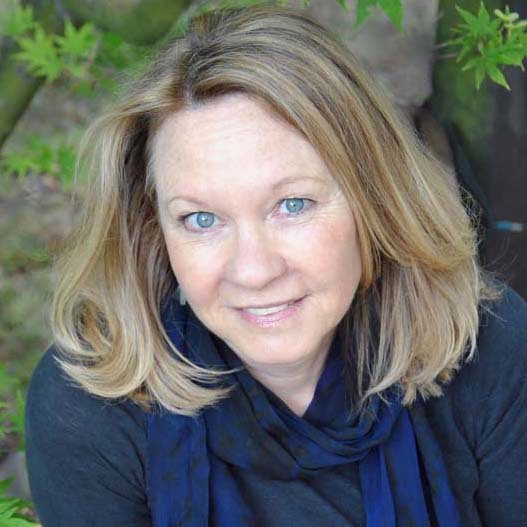 The Race for Paris: A Novel Kindle Edition

“Ambitious, riveting…. Deftly weaving fact and fiction, Clayton captures the texture and cadence of daily life in a world that is anything but ordinary.” (Christina Baker Kline, New York Times bestselling author of Orphan Train)

“This marvelous novel has everything-adventure, romance, history, and most of all heart. Every reader who enters this ‘Race’ will come out a winner.” (Ann Packer, Bestselling Author of Swim Back to Me and The Children's Crusade (forthcoming))

“Clayton introduces us to a world we never knew existed and then makes it utterly compelling. I loved the story of these brave women, the risks they took, the ambitions that fed them. Moving and gripping, it is a thriller of women and war.” (Mary Morris, award-winning author of The Jazz Palace and The River Queen)

“Clayton’s most ambitious undertaking to date may be fiction, but it’s impeccably researched, offering a striking glimpse into what life was like for the predecessors of some of today’s most famous female journalists. A must for World War II buffs and fans of sharp, boundary-busting female characters.” (Kirkus Reviews)

“A smart, engrossing, and ultimately heartbreaking story…Clayton gives us a story of friendship, love, and sacrifice that no one who has the pleasure of reading it will soon forget. I loved this book.” (Sara Gruen, #1 New York Times bestselling author of Water for Elephants and At the Water’s Edge)

“Thrilling…a dangerous, fast-moving adventure. Well-researched, the novel puts the women in the path of bombs, gunfire, gender bias and arcane military restrictions; Clayton models her characters on real-life pioneers―Martha Gellhorn, Lee Miller and other women who broke barriers to get the story.” (San Jose Mercury News)

“Clayton’s narrative is sophisticated and well structured…. Her description of the liberation of Paris is riveting. She skillfully reveals the inadequacies of one photo or one article to capture the full magnitude of such an event. And her prose stirs the imagination.” (San Antonio Express–News)

“Involving and thoroughly researched.... Clayton tells a story that will draw women’s-fiction readers as well as historical-fiction and WWII devotees.... Entertaining and enlightening reading.” (Booklist) --This text refers to an alternate kindle_edition edition.

Inspired by the extraordinary female journalists who were among the first to report the Allied liberation of Paris from the Nazis in 1944, The Race for Paris follows two war correspondents on their quest to document (and make) history. Jane is a young, single reporter who meets photographer Olivia, “Liv,” on assignment at a field hospital.

Unlike their male colleagues, Liv and Jane are constantly confronted by red tape and derision. Jane is resigned to making the most of her assignment, but Liv is determined to chase a bigger story. After failing to win over her commanding officer, she goes AWOL to Paris—and Jane, seizing the chance to make a name for herself, joins her.

Reluctantly accompanied by a male British military reporter, the two women scramble through the gunfire and carnage scarring the French countryside. Their journey is further complicated by emotional bonds, romantic tensions, and one woman’s secret—a secret with the power to end her career and, perhaps, her life.

Inspired by the extraordinary female journalists who were among the first to report the Allied liberation of Paris from the Nazis in 1944, The Race for Paris follows two war correspondents on their quest to document (and make) history. Jane is a young, single reporter who meets photographer Olivia, "Liv," on assignment at a field hospital.

Unlike their male colleagues, Liv and Jane are constantly confronted by red tape and derision. Jane is resigned to making the most of her assignment, but Liv is determined to chase a bigger story. After failing to win over her commanding officer, she goes AWOL to Paris--and Jane, seizing the chance to make a name for herself, joins her.

Reluctantly accompanied by a male British military reporter, the two women scramble through the gunfire and carnage scarring the French countryside. Their journey is further complicated by emotional bonds, romantic tensions, and one woman's secret--a secret with the power to end her career and, perhaps, her life.

--Bookreporter.com --This text refers to an alternate kindle_edition edition.

Meg Waite Clayton is the author of The Language of Light, a finalist for the Bellwether Prize. Her stories and essays have appeared in Runners World, Writers Digest, and numerous literary magazines. A graduate of the University of Michigan Law School, she lives in Palo Alto, California, with her husband and their two sons.

4.1 out of 5 stars
4.1 out of 5
152 global ratings
How are ratings calculated?
To calculate the overall star rating and percentage breakdown by star, we don’t use a simple average. Instead, our system considers things like how recent a review is and if the reviewer bought the item on Amazon. It also analyzes reviews to verify trustworthiness.
Top reviews

Patti
VINE VOICE
3.0 out of 5 stars not as exciting as its subject matter
Reviewed in the United States on July 11, 2017
Verified Purchase
The race in question is the race to report the liberation of Paris at the end of WWII. Jane, the narrator, writes for the Nashville Banner, and Liv is a talented Associated Press photographer. Female journalists were generally forbidden from war zones at that time, but Liv is determined to capture shots from the front. She persuades Jane to join her on this dangerous gambit, and Fletcher, a British military photographer and friend of Liv’s husband, takes them under his wing. Unfortunately, his protection has its limits, and the girls find themselves in trenches and dodging bullets, while existing on K-rations and chocolate. Although this sounds like a treacherous adventure, the action does not exactly leap off the page, and neither do the characters. Liv is an intrepid risk-taker, haunted by rumors of her husband’s infidelity back in the States. Jane has a thing for Fletcher, but he has eyes only for Liv. Jane struggles with jealousy but never divulges enough of herself to show us someone for whom Fletcher could forsake Liv or his absent fiancée. Jane also has a bit of a chip on her shoulder, because she’s never known her father and her mother is a maid. She should stand even taller than her affluent comrades, given how far she’s come, but instead she seems to defer to Liv on almost every decision about their journey. She becomes both Liv’s and Fletcher’s confidante while subordinating her own preferences. Jane respects and admires Liv and Fletcher, but I never had the sense that they reciprocated.
Read more
5 people found this helpful
Helpful
Comment Report abuse

Theresa Donovan Brown
5.0 out of 5 stars When the Going Gets Tough, Girlfriends Get Going
Reviewed in the United States on September 21, 2015
Verified Purchase
What are we running from; what are we chasing? Often, wretchedly and amazingly, it is the same thing.

Meg Waite Clayton's strong, vivid historical novel The Race for Paris, brings these tough questions smack up to the surface of her riveting story about women warriors of a sort who broke down barriers for everyone who has followed their dreams in the face of prejudice on the one hand and daunting challenges -- physical and moral -- on the other.

This is a war story that helps those of us now distant in time to grow in respect for World War II's freedom fighters. Related with an unflinching eye, you taste the grit, smell the burning (flesh, petrol, explosives, bartered cigarettes) and confront the hard moral choices. The two women at the center of the plot follow the mandates of unblinking journalists. Clayton's prose pops harsh flash bulbs that illuminate gruesome battle and field-hospital scenes. While immersed in such well-told, brutal moments, you feel as if you are having your hand held tightly by a good friend.

The best parts of this novel elaborate the compelling, fraught girl-buddy story at its heart. Like many an intense friendship, this one is laced with mixed feelings, competitiveness, jealously, and deep mutual respect.

It's a dense novel, but a fast read.

Michelle Clements James
4.0 out of 5 stars Well researched and vivid characters
Reviewed in the United States on July 19, 2019
Verified Purchase
The Race for Paris is the story of two women journalists who chronicled the liberation of Paris at the end of World War Two. These women were determined to get to the front at a time when women reporters and photographers were barred. The story is intense with vivid descriptions of the fighting, even finding the women in the thick of the battle.
The author’s research into history of the war and the role of war correspondents was well done. She created a story full of pictures of scene after scene painted with words, giving the reader a glimpse into a world few are still alive to tell about.
The characters were well fleshed out and seemed like ordinary people with extraordinary goals. They had no battle experience, yet they forged ahead to be the first in their field to get the story in Paris.
I would recommend The Race for Paris to anyone who enjoys historical fiction, tales of World War Two, the friendships shaped between two women, or the stories of women who advanced in their professions years before it was the accepted practice. My only complaint is that the story moved too slowly, therefore I am giving it 4 stars.
Read more
One person found this helpful
Helpful
Comment Report abuse

LegalBeagle
5.0 out of 5 stars Sorry when it ended.
Reviewed in the United States on September 6, 2015
Verified Purchase
I have read every Meg Waite Clayton novel and would give five stars to each. But this is the best of the best. It combines the author's earnest storytelling, her passion for her characters, and her gift for the language.

As with all her novels, the Race for Paris brings a keen awareness of major social issues of our own time, especially ones bearing on the lives and careers of women, to an imagined historical moment. With the Race, Clayton shows the reach of her talent for historical fiction. The story follows a female photojournalist and female print journalist in the weeks after D Day. Clayton describes some of her extraordinary research in an appendix. The novel communicates her infectious admiration for women documentary photographers of the 30s and 40s--above all for the great Margaret Bourke-White, who like Clayton herself attended the University of Michigan.

I read the novel in its hardback format. The production team deserves a special award for a beautiful book. Details like the artistic titling, well chosen type, generous but not wasteful spacing, and above all those wonderful art-deco-esque lines at the chapter heads--all make the book a pleasure to hold and read. The attractive cover montage is so effective I will even forgive the illustrator for putting a vest pocket Kodak in the hands of a professional photographer. (Clayton's Liv carries a Leica.)

The story ends with a satisfying twist. Keep the Kleenex box handy. This one is a weeper but an honest one.
Read more
5 people found this helpful
Helpful
Comment Report abuse
See all reviews