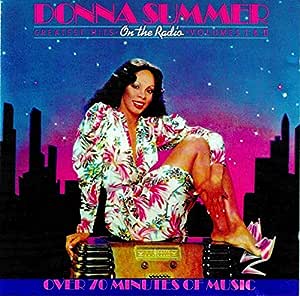 Secure transaction
Your transaction is secure
We work hard to protect your security and privacy. Our payment security system encrypts your information during transmission. We don’t share your credit card details with third-party sellers, and we don’t sell your information to others. Learn more
Details
Ships from
BrassMusicCafe
Sold by
BrassMusicCafe
Have one to sell?
Sell on Amazon

LaDonna Adrian Gaines (December 31, 1948 – May 17, 2012), widely known by her stage name based on her married name Donna Summer, was an American singer, songwriter, and actress. She gained prominence during the disco era of the late 1970s. A five-time Grammy Award winner, Summer was the first artist in history to have three consecutive double albums reach number one on the United States Billboard 200 chart and charted four number-one singles in the US within a 12-month period. Summer has reportedly sold over 100 million records worldwide, making her one of the world's best-selling artists of all time. She also charted two number-one singles on the Hot R&B/Hip-Hop Songs chart in the US and a number-one single in the United Kingdom. Summer earned a total of 42 hit singles on the US Billboard Hot 100 in her lifetime, with 14 of those reaching the top-ten. She claimed a top 40 hit every year between 1975 and 1984, and from her first top-ten hit in 1976, to the end of 1982, she had 12 top-ten hits (10 were top-five hits), more than any other act during that time period. She returned to the Hot 100's top-five in 1983, and claimed her final top-ten hit in 1989 with "This Time I Know It's for Real". Her most recent Hot 100 hit came in 1999 with "I Will Go with You (Con te partirò)". While her fortunes on the Hot 100 waned through those decades, Summer remained a force on the US Dance Club Songs chart over her entire career.

4.4 out of 5 stars
4.4 out of 5
79 global ratings
How are ratings calculated?
To calculate the overall star rating and percentage breakdown by star, we don’t use a simple average. Instead, our system considers things like how recent a review is and if the reviewer bought the item on Amazon. It also analyzes reviews to verify trustworthiness.
Top reviews

Rick Avant
5.0 out of 5 stars Donna Summer - The Ultimeate Bad Girl - "Beep, Beep"
Reviewed in the United States on October 27, 2017
Verified Purchase
The Incomparable Donna Summer lives forever "On The Radio" - When I listen to this Greatest Hits collection it seems like only yesterday that I spent so much time listening to her "On The Radio". It's so hard to believe that it's been nearly Four Decades since these songs hit the airwaves. However, the truly spectacular thing is that this awesome compilation hasn't lost any of its 5-Star fire as one hit after another ran practically through me until I found myself singing along with songs that, for a time, had completely faded from memory. There's nothing that surprises me more than someone who hadn't spent their teenage years in the 70s can be so critical of it, but frankly, the true test of how good a song you are listening to is the fact that the lyrics still ring so very true today.

Trust me, you don't have to have lived through the 70s to appreciate how great these songs were and still are, not to mention how versatile and timeless Donna Summer's voice will always be. It's true she left us in 2012 but thanks to this collection she will always be remembered. For some Donna was Disco, but anyone who truly listened to her music knows she was So Much More! I highly recommend that your make "On The Radio" a part of your collection Today.

Oh, in case you weren't aware of it, the majority of this recording was put together with a "disco" feel by weaving most of the songs together one right after another in a way that allows them to be played in a nearly endless stream one after another. I can only guess that this was done in celebration of us "old disco lovers" so that we can still get up on the floor and dance.
Read more
2 people found this helpful
Helpful
Report abuse

Eric C. Springer
5.0 out of 5 stars Donna Summer's album On The Radio is a great collection of music
Reviewed in the United States on May 21, 2017
Verified Purchase
Donna Summer's album On The Radio is a great collection of music, and all the songs pretty much lead into each other, and even though most of these classic disco/pop tracks land on other Greatest Hits Of Donna Summer or compilations, this is thee one to have, but you won't find any of her songs that hit in the 80's, like She Works Hard For The Money or This Time I Know It's For Real, this focuses on the disco era of where her real fame began. A must have because these songs are perfectly blended and remixed into each other, the mother of all dance albums...if you liked Paula Abdul's Shut Up And Dance and various others who have done similar remixed albums, this is basically where that sort of album began, right here with Miss Donna Summer!
Read more
3 people found this helpful
Helpful
Report abuse

D.W.
5.0 out of 5 stars Honest disco, and true to the original
Reviewed in the United States on January 9, 2017
Verified Purchase
I bought this album, and the songs are all exactly as found on the original album. The tracks are all hits, and you are not going to find filler here. There are a few single versions on this album, the same as with the original vinyl and CD versions. Songs off Bad Girl are single versions. You will find the long version of No More Tears (properly a Donna Summer song) and On The Radio on this collection.

About the only reason I would think of not giving this prime example of disco would be if you simply cannot stand disco in any form, or your religion absolutely prohibits listening to it. Otherwise, you are missing out on some real good music by passing up this fine collection. It does stop in early 1980, so you are not going to find songs such as The Wanderer, Who Do You Think You Are Fooling, Finger on the Trigger, She Works Hard for the Money, There Goes My Baby, or This Time I Know It's For Real. All of those songs were released later. But, you will find gems like Last Dance, I Feel Love, Bad Girls, McArthur Park (not the 15 minute suite, just the song itself), Heaven Knows, No More Tears, and On The Radio.
Read more
7 people found this helpful
Helpful
Report abuse

Barry VonHagel
4.0 out of 5 stars The QUEEN of disco
Reviewed in the United States on September 16, 2017
Verified Purchase
This woman had the voice of an angel and was ahead of her time. She was smart to pair with Georgio and make some of the most dance-able music of the time. I have this on vinyl it's a good collection of some of her best ones.
Read more
3 people found this helpful
Helpful
Report abuse

Jean Stearn
5.0 out of 5 stars A Disco Lover
Reviewed in the United States on January 9, 2016
Verified Purchase
My husband and I lived through the disco era. I know that you either love it or hate it but Donna Summer's put out the best of the disco music. We love many of the songs and they bring back great memories of being on the dance floor having fun. Brings a smile to my face.
Read more
2 people found this helpful
Helpful
Report abuse

S. Leibert
5.0 out of 5 stars A Must Have for Disco Buffs! 1st cut of On The Radio with Streisand is beautiful!
Reviewed in the United States on February 27, 2016
Verified Purchase
Must have if you loved the late 70's and disco. On The Radio (short version) with Streisand vocals is great. I love the whole album. I loved Disco. Great times with good friends!
Read more
2 people found this helpful
Helpful
Report abuse

Turner H.
3.0 out of 5 stars What you might expect
Reviewed in the United States on September 25, 2018
Verified Purchase
Arrived on time, quality is always a risk with these old cassettes
Read more
Helpful
Report abuse

Lincoln Hansen
5.0 out of 5 stars Queen of Disco!
Reviewed in the United States on March 14, 2018
Verified Purchase
THis most of the good ones on it. Never gonna get them all on a single disc.
Read more
One person found this helpful
Helpful
Report abuse
See all reviews