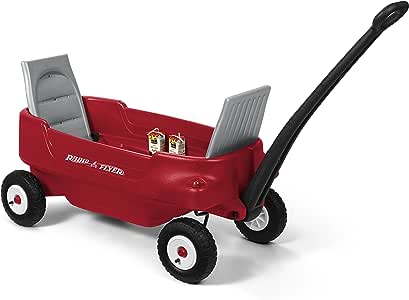 Radio Flyer started creating smiles and warm memories for children of all ages in 1917. Today we remain a Chicago-based family company committed to creating quality products that inspire adventures fueled by laughter and joy. For over 100 years, countless voyages of childhood fantasy have been launched with Radio Flyer toys. This legacy continues to spark the imagination as Radio Flyer is rediscovered with each new generation.

The Radio Flyer All-Terrain Pathfinder Wagon is designed with air tires for a smooth ride. This wagon combines durability, comfort and safety to provide endless family fun. It is equipped with 4 child cup holders, seatbelts, and versatile seat backs that fold up or down creating two wagons in one. The fold-under handle makes it easy to storage.

The Radio Flyer all-terrain Pathfinder wagon is designed with air tires for a smooth ride. This Wagon combines durability, comfort and safety to provide endless family fun. It is equipped with 4 child cup holders, seatbelts, and versatile seat backs that fold up or down creating two wagons in one. The fold-under handle makes it easy to storage.

4.7 out of 5 stars
4.7 out of 5
395 global ratings
How are ratings calculated?
To calculate the overall star rating and percentage breakdown by star, we don’t use a simple average. Instead, our system considers things like how recent a review is and if the reviewer bought the item on Amazon. It also analyzes reviews to verify trustworthiness.

TLMKC
3.0 out of 5 stars The Pros and Cons of this Wagon.
Reviewed in the United States on September 4, 2017
Verified Purchase
I am trying to give a completely honest review of this wagon. We had an issue with shipment, purchased the Grandstand wagon and then this one arrived late. Here are my thought now, that I am familiar with both wagons. The Grandstand has a much better handle. You can flip it into the cargo are for quick storage and easy transport. You can pull it back and actually push your wagon so you are beside your little man/woman. The Pathfinder handle will tuck neatly under the wagon for transport but is a bit awkward to get your wagon in and out of your vehicle. you can only pull the wagon with it. Seats. Both are similar, nice, have seat belts and are nice. Make sure you put a towel on them in the hot sun or your are going to hear Hot! Hot! Hot! Cup Holders. Again the Grandstand was an A++. It offered two cup holder in the cargo area and two awesome cup holders by the handle. They easily held two YETI 32 oz tumblers, so Grandma and Grandpa would not get thirsty at the zoo. The handlebar cup holders were in a great location, little man could not get to the Grandparents beverages. Pathfinder has 4 cup holder in the cabin. WTH does little man need more than one drink holder and the YETI would not fit in any of these. I give the Pathfinder a C- on drink cup carrier abilities. I had to go to Wallyworld and get to car cup holders and devise my own drink holder for the Pathfinder. It worked fine but I miss the Grandstand's holders. Now for the wheels. The Grandstand had narrow flimsy wheels. It steered fair, was difficult to maneuver on some of the gravel paths at the zoo, and little man let us know the ride was bumpy. Now for the Pathfinder, the wheels are what seals the deal. The ride is smooth, it gets up and goes over gravely paths, can take it in the grass at the park, and you can get to lots of places. I definitely can get around easy with this wagon, and little man likes it, (he should he has four cup holders all to himself) and he isn't bumped around. Price, the Grandstand was $99 from Raido Flyer and the Pathfinder was $139. I would say search Radio Flyer, find a wagon with a flip in handle, cup holders by the handles and all terrain tires, that would be the ideal wagon. If I had to chose between the two, I would go with the Pathfinder because it is more mobile and great at zoos and parks. The one issue I have with these wagons is they have seats, the are on the go wagons, the need to have a park break, you need to be careful where you stop it so it doesn't roll off.
Read more
53 people found this helpful
Helpful
Comment Report abuse

Niki
5.0 out of 5 stars Great for beach and everything else
Reviewed in the United States on August 2, 2018
Verified Purchase
This thing has been my greatest purchase for my twins! (They are 9mo old) We've been going everywhere in it and they are so much more tolerant of walks since they aren't as tied down as they are in the stroller and it makes them way less sweaty. I bought it originally just for the beach and was a little skeptical after hearing a few people say it doesn't do sand well but it worked great for me! It got the twins and their toys to the shore no problem. It obviously doesn't go as smooth as on street or dirt but it's so much easier than the stroller (which was a nightmare). It's totally doable. I love this wagon so much!
Read more

LIsa V
2.0 out of 5 stars Faulty front axles? Stars for customer service only.
Reviewed in the United States on September 6, 2017
Verified Purchase
Is it possible to have received a faulty wagon? I feel like that's what happened. Since the day we received it we haven't been able to use it because of issues with the front wheels not swiveling correctly. The first time, admittedly, I guess I had the front axles on incorrectly, so I ordered new pieces from the parts store and switched them thinking that'd do the trick. It still didn't work so I contacted customer service, who is amazing, by the way, and have gone back and forth with them about 4-5 times trying to correct the issue while trying different things but it's still not working correctly. The issue is solely with the front wheels not turning correctly. I know it can't do sharp turns but it won't turn at all, the wheels turn sideways and then I almost fling my toddler out of it because it just stops in its tracks because the wheels are turned sideways and won't spin back around to straighten themselves out. To say it's frustrating after spending a decent amount of money is an understatement, especially when we've wasted a whole spring/summer season at an age when she would have really enjoyed it. Like I said, customer service has been exceptional as far as returning all my emails in a timely manner and sending out replacement pieces with instructions on troubleshooting ideas, however, i'm still left with a pricey wagon that will not work and a disappointed toddler who sits in it everytime she sees it wanting to go for a ride and me having to tell her we can't because it doesn't work. :( So sad about this but i'll keep trying with customer service to resolve the issue.
Read more
26 people found this helpful
Helpful
Comment Report abuse

RT
1.0 out of 5 stars It's complete garbage.
Reviewed in the United States on April 13, 2019
Verified Purchase
This wagon is horrible. The front wheel alignment geometry is ruined after the first couple uses and the front wheels are forever towed out (both front wheels steering outward simultaneously). It's front the flex in the plastic body. It's because with any weight the front wheels tilt (caster) which ruins the factory spec geometry, allowing them to stay turned outward. We've used this maybe 8 times and it's not complete garbage. Going to try to return it.
Read more
11 people found this helpful
Helpful
Comment Report abuse

Jason
5.0 out of 5 stars Quality product.
Reviewed in the United States on March 1, 2017
Verified Purchase
Glad I spent the extra money on this model vs the one with plastic wheels. My 2 year old loves riding it in and it is easy enough for her to get in and out of it. The tires are inflatable and wide which makes it much easier when you have to cross over grassy areas and makes big bumps in the sidewalk a little softer. The cup holders are a nice feature and make it easy to drag along some bottles of water when going to the playground.
Read more
11 people found this helpful
Helpful
Comment Report abuse
See all reviews

Page 1 of 1 Start overPage 1 of 1
This shopping feature will continue to load items when the Enter key is pressed. In order to navigate out of this carousel please use your heading shortcut key to navigate to the next or previous heading.
Back
Next
Pages with related products. See and discover other items: little radio, drink game, storage ideas for toys, baby radio, Best all terrain wagons for beach, Explore inflatable seats for picnics