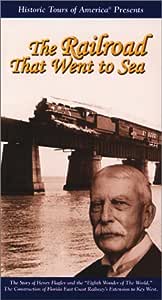 It was the beginning of the 20th Century - America's Gilded Age. And Henry Flagler, one of America's wealthiest men, set out to build the "Eighth Wonder of the World" - a railroad over the Florida Keys from Miami to Key West, 128 miles out to sea.

Learn about Henry Flagler, the man who transformed Florida's East Coast from a wilderness into a winter wonderland for America's rich and famous. Marvel at the innovative engineering techniques that conquered the Atlantic Ocean, the Gulf of Mexico, and brutal conditions that tried the mightiest of men.

Experience the day the first train arived in Key West in 1912, and the magic of gliding by rail over a Seven Mile Bridge, while stingrays dance in the waters below. Witness the fury of the 1935 hurricane that destroyed the railroad, and the building of the Overseas Highway that today carries visitors over the railbed Henry Flagler built.

This award-winning video is rich with archival photographs and film footage, eyewitness accounts, and interviews with historians. Together, the weave a spellbinding story of the greatest American railroad engineering feat of the 20th Century.

Amazon Customer
5.0 out of 5 stars great DVD for for those who like travel/landscape
Reviewed in the United States on February 28, 2003
Verified Purchase
This DVD is amazing, one of the top DVD I archived (70+).
The DVD is 3+ hours long, consist of the 2 volumes of VHS counterpart in one. The sound quality is great, picture quality 4.
Different from many travel video, in which the comentators are speaking with commercial speed (some indeed try to squeeze in as much commercial as possible), this video just has few comments where there is a need, the rest (much of the time) , it leaves you just enjoy the passing scene (accompanied by music right for the mood).
It is very landscape oriented, you reaaly feel you are a passenger with peaceful mind.
Volume 1: heartland america, from Washington DC to Sanfrancisco, great landscape w/ vastness views, 2 hours+
Volume 2: west cost, from San Diego to Seattle, great pacific coast views plus Yosemite etc, 1 hour

Lance
5.0 out of 5 stars excellent views of Coastal California as it was about 20 - 30 years ago
Reviewed in the United States on October 26, 2020
Verified Purchase
Pretty reasonable narration, reminded me of taking the coast daylight from Davis to Los Angeles when I was an undergraduate, so it had a pleasant nostalgic dimension for me.
Read more
Helpful
Comment Report abuse

D. Lamport
4.0 out of 5 stars Appreciate One Man's Contribution
Reviewed in the United States on March 14, 2013
Verified Purchase
Presentation does a great job of documenting Flagler's efforts to make transportation available from Miami to Key West. It makes a trip down US 1 a trip into history as you pass landmarks and appreciate the effort of thousands and the loss of life that went into making this possible.
Read more
One person found this helpful
Helpful
Comment Report abuse

Harold
5.0 out of 5 stars Trains
Reviewed in the United States on May 28, 2015
Verified Purchase
For those who love trains, this is a very nice vhs video on them.
Read more
One person found this helpful
Helpful
Comment Report abuse

Edwin J. Zawacki
1.0 out of 5 stars Winter Wonderland
Reviewed in the United States on June 30, 2005
Verified Purchase
I thought this video was terrible. I could not believe most of the video was taken from a camera pointed out the side or back of the train and turned on to record. The only good part of this video was the archived footage from the steam locomotives that were included in. This video can not keep the attention of my four year old son who loves trains. I clearly expected better.
Read more
5 people found this helpful
Helpful
Comment Report abuse
See all reviews

Steamysandy
5.0 out of 5 stars Travel by rail
Reviewed in the United Kingdom on July 21, 2019
Verified Purchase
Very interesting. I travelled over one or the Swedish lines many years ago
Read more
Report abuse
See all reviews