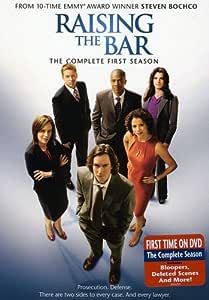 From Emmy(R) winning producer Steven Bochco comes the powerful new legal drama about the fight for truth and honesty -- in the courtroom and in the relationships between those who battle on both sides of the system. Feel the heat with RAISING THE BAR: THE COMPLETE FIRST SEASON. "A solid legal drama," says Barry Garron of The Hollywood Reporter. Jerry Kellerman is an idealistic public defender who will stop at nothing to help those who can't help themselves. When he clashes with district attorney Michelle Ernhardt, sparks fly, but they are both kept in check by Judge Trudy Kessler, an imperial force with an eye on a political run. Experience every heated confrontaton and all the behind-the-scenes secrets in a brilliant series based on today's cutthroat legal world. Mark-Paul Gosselaar, Gloria Rueben and Jane Kaczmarek head a brilliant cast. Complete with exclusive bonus features, this riveting drama is even greater on DVD.

Mark-Paul Gosselaar stars in Raising the Bar as a crusading public defender whose passion gets him in as much trouble as it gets him out of. As Jerry Kellerman, Gosselaar (NYPD Blue) is damp-eyed and earnest, off-kilter and rebellious (indicated by taking his tie off whenever possible), but he’s one of the top lawyers of a firm headed by cool-as-a-cucumber Rosalind Whitman (Gloria Reuben, ER). He also has connections across the aisle with rising prosecutor Michelle Ernhardt (Melissa Sagemiller, Sleeper Cell), a beautiful blonde who tolerates sleazy behavior from her boss Nick Balco (Currie Graham, Suddenly Susan). Both Jerry and Michelle regularly appear in the court of loose cannon Judge Trudy Kessler (Jane Kaczmarek, Malcolm in the Middle), who’s having an affair with her clerk, Charlie Sagansky (Jonathan Scarfe), who just happens to be gay and closeted. Clearly, Raising the Bar emphasizes behind the door machinations, both political and sexual.

It’s familiar stuff, which is both a strength and a weakness. For fans of producer Stephen Bochco (creator of Hill Street Blues, L.A. Law, NYPD Blue, and much more), Raising the Bar will work like comfort food. Each case unfolds capably, with thorny moral conflicts and compromising private interests, complicated by human weakness and bureaucratic callousness. Maybe too capably; the gears spin so smoothly it’s hard to get emotional traction with the characters, whose personalities seem secondhand from other legal shows. Entertaining histrionic cross-examinations abound, as do wild case-saving coincidences and compassionate looks between lawyers and defendants. The 10-episode collection of Raising the Bar: The Complete First Season also has an engaging featurette focused on the show’s other co-creator, David Feige, a real-life public defender whose experiences are the series’ inspiration. Feige's genuine enthusiasm and engagement may inspire viewers to give the show a chance. --Bret Fetzer

Stills from Raising the Bar: The Complete First Season (Click for larger image)

Karen Brook
5.0 out of 5 stars Raising the Bar hit the bar with good story lines and interesting characters....a good series!
Reviewed in the United States on September 7, 2015
Verified Purchase
"Raising the Bar" continues to raise the bar with its quality of characters and story lines with each episode. There are thoughtful issues, interesting dilemmas to discover, clients and victims with whom the viewer can identify as the talented attorneys on both sides work passionately at their jobs. I enjoy a legal drama as interesting, entertaining, thought-provoking entertainment and this series meets the mark. It doesn't leap high over the mark, but it is enjoyable, good television, in my opinion. I would recommend it to those who like shows about the practice of criminal law and are finding it tough to find many good series available in this genre. And then, there is Season Two to look forward to! I enjoyed this and wished for more.
Read more
2 people found this helpful
Helpful
Comment Report abuse

Sherry Bell
4.0 out of 5 stars A novel and realistic view of the criminal courtroom
Reviewed in the United States on August 8, 2015
Verified Purchase
Engaging stories about criminal defendants and the lawyers defending them. The series presents attorneys on both sides of the case with the defense receiving more sympathetic view. The actors begin somewhat woodenly but grow into their roles. Very entertaining and as an aside it depicts judges as the unfortunate and egocentric individuals they are.
Read more
2 people found this helpful
Helpful
Comment Report abuse

Jocelyn
5.0 out of 5 stars You will learn a lot about the law.
Reviewed in the United States on August 20, 2019
Verified Purchase
Love the actors and actresses.
Read more
Helpful
Comment Report abuse

CJ
5.0 out of 5 stars Raising the Bar the first season so good and enterained
Reviewed in the United States on August 16, 2018
Verified Purchase
This show is so good and enteratined. I had to purchase season 2
Read more
Helpful
Comment Report abuse

RandR
5.0 out of 5 stars Excellent Characters and writing
Reviewed in the United States on November 2, 2009
Verified Purchase
Excellent story lines, excellent acting and excellent writing. I hope it continues to deliver the content that it currently offers and does not turn into a soap opera as some of my past favorites have done. But for now, so far, so very good! I agree it is suprisingly addictive, i actually started watching bc I just wanted some noise on and had no idea there would be such good writing and characters.
Read more
Helpful
Comment Report abuse

B. Exner
5.0 out of 5 stars Fantastic Series
Reviewed in the United States on October 14, 2009
Verified Purchase
I highly recommend this title. Raising the Bar is a wonderful series that follows the life of recent law school graduates who prosecute and defend the underprivileged of New York. The drama unfolds both in the courtroom and in the personal lives of the lawyers. Writer Dave Feige, a veteran NYC Public Defender draws on his own experience to weave a colorful tapestry that is at times heroic and at times heart wrenching. There are often no winners in the criminal justice system, and the lawyers need to find the delicate balance between truth and practicality as they advocate for their clients. Mark-Paul Gosselaar delivers excellent performances as a brash, young defender who gives the job everything he has, yet often ends up in frustration at the injustice of an inherently flawed system.
Read more
2 people found this helpful
Helpful
Comment Report abuse

karen harding
1.0 out of 5 stars One Star
Reviewed in the United States on March 1, 2016
Verified Purchase
The DVD series arrived on time and in perfect condition. Did not finish watching episode one. No worth watching.
Read more
Helpful
Comment Report abuse

Suzanne
5.0 out of 5 stars true to life
Reviewed in the United States on December 5, 2010
Verified Purchase
this show actually depicts the justice system for what it is. It includes all it's many flaws which makes for such interesting viewing. It also includes a tangled web of interpersonal relationships that go beyond just the workplace but to the bedroom. My b/f and I were so sad to see this show go :(
Read more
2 people found this helpful
Helpful
Comment Report abuse
See all reviews

Uenna
5.0 out of 5 stars A great Legal Drama
Reviewed in the United Kingdom on May 8, 2013
Verified Purchase
I had some misgivings about buying this dvd because someone said it was not interesting, but I went ahead because I like Mark Paul Grosselar and I like legal dramas. However I was not disappointed as it was indeed a great legal drama with an interesting script that was well written and well executed.It was great watching Mark play a self righteous lawyer as opposed to his usual prankster characters like Zack Morris in saved by the bell.
The drama follows the lives of some lawyers working for the office of the public defender and their friends in the prosecutors office. We see lawyers who will go to any length to get a win and others who will do everything to protect their client. I loved the character developments, and the characters. The only thing I did not like was that the lighting was poor,but on the whole a good one to watch.
Read more
3 people found this helpful
Report abuse

James Lowe
4.0 out of 5 stars An Excellent Legal series
Reviewed in Canada on August 11, 2017
Verified Purchase
An excellent series . I will purchase other Seasons that are available.
Read more
Report abuse

Page 1 of 1 Start overPage 1 of 1
This shopping feature will continue to load items when the Enter key is pressed. In order to navigate out of this carousel please use your heading shortcut key to navigate to the next or previous heading.
Back
Next
Pages with related products. See and discover other items: disney movies box set, xmas movies, dads' birthday products, Best bars for home