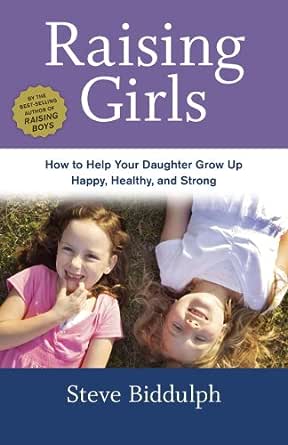 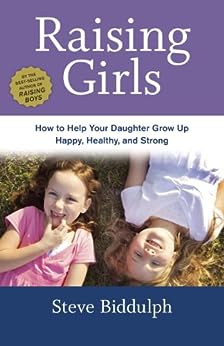 Raising Girls: How to Help Your Daughter Grow Up Happy, Healthy, and Strong Kindle Edition

STEVE BIDDULPH is a world-famous family therapist. HisSecret of Happy Children(published by Thorsons April 97) has sold more than a million copies and has been published in 15 languages.

Praise for Steve Biddulph:`When you find a guru willing to change his mind when evidence and humanity prompt, you rejoice. For me, Steve Biddulph - one of the most popular [parenting gurus] in the world, with four million books sold - is the man.'Libby Purves, The Times`Biddulph... has a built-in feel good factor. Parenting books too often make one fell inadequate, but Biddulph's left me refreshed and optimistic.'The Express`Steve's advice is easy to follow - and more importantly, it works.'BBC Family Life MagazinePraise for Raising Boys:`Packed full of pithy wisdom on what it is to move from boyhood to manhood and how to help your (not-so) little one on his way.'The Independent --This text refers to an alternate kindle_edition edition.

A Letter from Steve

Dear Reader,
It’s amazing what you learn about yourself. Twenty years ago, when we were expecting our second child, friends naturally asked what we were hoping for, a boy or a girl? I always said I didn’t mind, and I really believed that was true. We already had a boy of seven, and we were very eager simply to have another child.
We had planned on having a homebirth, but it ended as an emergency caesarian—that’s what we do every time in our family! So I found myself standing in the operating room, trying my best not to faint. Then from Shaaron’s belly the medical team pulled a slippery bundle, and somebody said, “Well done, you’ve got a little girl!” Suddenly I was crying. And laughing. And jumping around. I was, in short, incredibly happy. I hadn’t realized how much I wanted a daughter. I was holding her and looking at her for hours afterward, just amazed. That was all those years ago, and the feeling hasn’t gone away.
Daughters evoke such strong feelings in us—protectiveness, awe, hope, and fear, but mostly just a fierce love and a wish to give them the best possible life.

For more than twenty years, I had a specialty in boys and men. It wasn’t a choice so much as a mission—back then, boys were a disaster zone, and urgently in need of help. I wrote the world’s top-selling book on raising boys, with a simple message that they needed to be strongly loved and firmly taught how to be good men, that they needed positive role models, and that their energy wasn’t a bad thing.
Back then, girls were doing fine. Then, in the mid-2000s, that started to change. We began to see a sudden and marked plunge in girls’ mental health, first in the United States but quickly spreading across the world. Problems such as eating disorders and self-harm, which had once been extremely rare, were now happening in every school and on almost every street. But more than this, the average girl, everygirl, was stressed and depressed in a way we hadn’t seen before.
Girls aren’t born hating their own bodies. They aren’t born angry at life. Something was happening in the culture that was poisoning girls’ spirits. It seemed to come on as they entered their teens, but it was creeping up on them younger and younger.
In response, a worldwide movement sprang up—of girl advocates, therapists, and researchers—to try to mobilize parents and the community. Many of these people were my friends, and together we saw the need for a simple parent-friendly book to help get girlhood back on track.
Raising strong girls starts far, far back, when they are tiny or toddlers, or just in elementary school. We have to love them well, and we have to fight the big world, too, since the predators that want to bring our daughters down are everywhere; they wear suits and make good money and have no conscience at all. The choices we make in the way we raise our daughters can help keep their spirits alive and their self-belief strong, even when the world sends a very different message.
Girlhood is a quest, a journey of gathering the wisdom needed to be a woman. We are our daughters’ guides on that quest. We need good maps, good stories, and clear eyes.
What could be more awesome than to see your daughter standing tall, wise, and strong at twenty-five or forty, and knowing that you helped to make her so? And what could be more worthwhile than to fight for a world that is open for all young girls, wherever they are born, to be able to realize their dreams?
I hope this book thrills you and helps you pass on to your daughter all the love you feel.