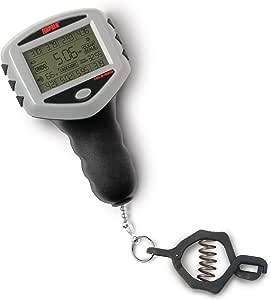 WARNING:� This product can expose you to chemicals including TDI, which are known to the state of California to cause cancer and birth defects or other reproductive harm.�� For more information go to:� www.P65Warnings.ca.gov

4.6 out of 5 stars
4.6 out of 5
384 global ratings
How are ratings calculated?
To calculate the overall star rating and percentage breakdown by star, we don’t use a simple average. Instead, our system considers things like how recent a review is and if the reviewer bought the item on Amazon. It also analyzes reviews to verify trustworthiness.

Tim Wachter
5.0 out of 5 stars tournament tested and proven - great scale!
Reviewed in the United States on May 6, 2013
Color: Original VersionVerified Purchase
to start, i want to point out the differences in the two scales. the 15lb scale weighs with an accuracy within one ounce, while the 50lb scale has an accuracy within 4oz, or 1/4lb. otherwise, i think the two scales are about identical.

i bought the 15lb version of this scale for use in the bass fishing tournament my bar holds every year. i was unsure how well a digital handheld scale would perform, so i got it a couple weeks early and took it everywhere with me to test it out. once i figured out how to turn it on and navigate through the various functions included, i was quite pleased. it feels very sturdy, even though it is also very light-weight. the grip is rubberized and textured so it won't slip from your hands, even when wet.

judging by the picture on the listing, i was concerned that the spring-clip clamp for securing fish to the scale wouldn't be very good at keeping hold of the fish. i was wrong! it is a very strong clamp, easily capable of holding on to enough weight to max out the scale. i never even felt the need to switch the clamp out with the included hook, because it did so well on its own.

my second concern was that the scale, being so light-weight and digital, may not be very accurate. in doing a bit of research, i found out that the scale calibrates every time you turn it on. so being the way i am, i wandered around the house and found several items to weigh and see how accurate the scale pegged their weights. about three times out of four, it was dead on, and nine times out of ten, it was within one ounce on 3lb and 5lb weights. it is possible, however, to throw the calibration off if you're careless while turning the scale on (resting it on your lap or applying any force to the chain) but if you simply hold the scale up and keep it still when you turn it on, it calibrates pretty accurately and consistently. i attribute the weighing inaccuracies to me moving with the scale in-hand while turning it on. once i figured out how to get a good calibration, it was dead on every time.

by tournament day i was confident the scale was good enough. every time i turned the scale on to weigh fish, i would first test it with the 3lb weight to ensure an accurate calibration. having had plenty of practice at this point, i got accurate calibrations every time. my biggest enjoyment using this scale was the ability to be mobile. in the past, we've had hanging scales that required a sturdy floor stand. being able to climb right up onto the live wells with this scale in hand was very convenient. my second biggest enjoyment was the comments i kept getting about the scale i was using. one guy commented that he didn't trust the weights i got on his fish, so i welcomed him to pull out his scale and we'd compare. the total weight across five fish was one ounce difference (18lb 9oz on my scale vs 18lb 8oz on his). that both surprised and upset him, as he thought his fish were bigger than that (don't we all?).

i did not use the included culling system, but i can see it being handy. i also did not use the weight bins for storing and calculating weight totals, because while we set the scale to display weight in pounds-ounces, the running total weight is only measured in 1/100th pounds. i can confirm that the bins work though, and would be very handy if you chose to use them.

overall, i am very pleased with this product. the touch screen requires a bit of pressure to operate, and the functions take a bit of memorizing to get used to. the backlight is handy but shuts off pretty rapidly. the temperature readings are inaccurately high, probably affected by being in the sun or if you're holding it in your hand for a while. but hey, we all have our quirks :) for $40, i don't think you'll find a better (or more versatile) handheld scale.

Tanner
3.0 out of 5 stars Great rig for the price, could use some fine tuning.
Reviewed in the United States on November 26, 2019
Color: Original VersionVerified Purchase
Pros: It's easy to read. My tourney model came with usable cull tags. Decent storage bag. The instructions are sewn right into the bag, and it's a good thing.

Cons: Use of this thing is not intuitive. It's all good if you just need weights. When you start trying to store weights you'd better re- read the directions ahead of time. Trying to figure it out while you have a fish hanging sucks. The touch screen isn't very sensitive, I have to mash on it pretty hard.
Read more
3 people found this helpful
Helpful
Report abuse

Wadev3
4.0 out of 5 stars Best Tourney Scale
Reviewed in the United States on May 1, 2015
Color: Original VersionVerified Purchase
This is one of the best tourney scales I have had in a long time. Very cool that it is touch screen (no learning curve, just touch where you want to store things). The clip is very strong and actually to the point that it is hard to get the clip open because it has so much clamping power. You can weigh a fish, and store that fish weight into one of the 8 storing spots that corresponds to a culling ball that is also included. Total weight is also shown. The accuracy appears to be very good, the screen is backlit when you need it to be. All in all, this is a very good scale and perfect for keeping track of all your fish. For a pretty good price too, I have seen scales that cost more and dont do what this one does. Also comes with a storing bag and the hook clip if thats what you prefer. Temperature is also displayed on this thing, although I dont really need that.

Update 6/16: Be careful when lifting the fish out of the livewell. I have had a couple of clips break when the fish flops and there is the right amount of pressure on them as your taking it off. Clips will stay in the fishes mouth but also break easily. Dropping my star rating to a four because the clips break after use.
Read more
11 people found this helpful
Helpful
Report abuse

zann68
5.0 out of 5 stars Many Features
Reviewed in the United States on February 12, 2021
Color: Original VersionVerified Purchase
The scale works really well and the fact it will log and store your fish weights is great. The unit came with lip tags also for tracking which fish is which. The unit will show you the lightest fish to cull when you catch a heaver fish, nice. The grip on this thing is very easy to hold onto. the touch screen work pretty good, no issues on that. the screen can be a bit hard to see if the angle is slightly off when looking at and the back light will not stay on but just a moment. No real major issues so far, also it came with 2 ways to lip hook the fish as well. I would buy it again.
Read more
Helpful
Report abuse

Bill B.
2.0 out of 5 stars NOT Waterproof
Reviewed in the United States on September 20, 2018
Color: Original VersionVerified Purchase
The scale works good enough as long as it isn’t raining during a tournament or sweating in your storage box in your boat. The screen gets water and moisture inside of it and either quits working, or you can’t read it. I can’t believe Rapala makes a Fishing product that isn’t Water PROOF. THIS SCALE ISNT. Great product when they are working, BAD designing.
Read more
2 people found this helpful
Helpful
Report abuse

Todd Gray
5.0 out of 5 stars Stop Fights Before They Start
Reviewed in the United States on April 21, 2017
Color: Original VersionVerified Purchase
My fishing buddy and I become very competitive while fishing. We also both seem to have selective vision when it comes to our catches. We both tend to over-estimate the weight of our fish while under-estimating the weight of the other's.

This scale ends these arguments.

The clip is quite solid and would easily hold twice the max weight of this scale. The clips on the included culling system are just as powerful. I attached a culling clip to my lip just to check and it grabs very tightly. My wife thought I was an idiot, but I wanted to check before using the culling system in tournament fishing.

Buy it, save a friendship, and win some tournaments.
Read more
3 people found this helpful
Helpful
Report abuse

Spirit
4.0 out of 5 stars Really like it
Reviewed in the United States on July 18, 2020
Color: Original VersionVerified Purchase
So ive had the scale since late summer 2019...
I made 1 adjustment ... added a locking clip to hold fish
Easy to read, easy to add weight to the scale easily to delete or replace weight...
You can find this scale for around $42 so do the research
Worth the money
Read more
Helpful
Report abuse

Lynda
1.0 out of 5 stars Does not weigh accurately
Reviewed in Canada on September 4, 2017
Color: Original VersionVerified Purchase
We spent a little more for this so it would be reliable when we do fishing tournaments, but it hasn't been accurate at all. It under weighs the fish...(which actually ended up being a nice surprise because at the time of weigh-in during the tournament we were had 5 pounds more than we thought we had). That said, this purchase was disappointing because we wanted to be able to take an accurate weight at the time we catch the fish!! This is supposed to be top of the line, so I have no idea which one to try next...In my opinion, this one is a waste of money. Very disappointing.
Read more
Report abuse

Amazon Customer
5.0 out of 5 stars Thank you
Reviewed in Canada on September 25, 2019
Color: Original VersionVerified Purchase
Like the picture
Read more
Report abuse