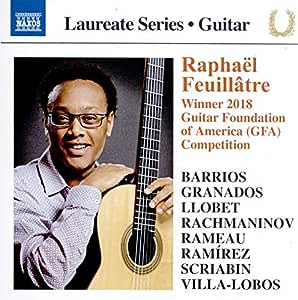 There are two aspects underlying this recording by Raphael Feuillatre, First Prize winner at the prestigious Guitar Foundation of America Competition in 2018: original works for the guitar and transcriptions. Among the former is Villa-Loboss Prelude No. 5, part of one of the most evocative and Romantic guitar cycles of the 20th century, the Chopinesque brilliance of the inventive Valse by Barrios Mangore, and the compendium of virtuosity that is Llobets Variations on a Theme of Sor. The transcriptions range from Rameau, through Rachmaninovs pianistic showcase, the Prelude No. 4, Op. 23, to the superbly evocative Alfonsina y el mar by Ariel Ramirez.

Clave Keeper
5.0 out of 5 stars Outstanding young performer
Reviewed in the United States on November 2, 2019
Verified Purchase
Award winning guitarist Raphael Feuillatre performs works ranging from Baroque to early 20th century music. He takes a personal approach to most of these pieces and varies his rhythmic and dynamic approaches in ways that can be striking and unexpected. If you're familiar with some of these works you may be hearing them in a new and perhaps surprising interpretation. He really brings out the uniqueness in each of the Granados waltzes setting them off against each other displaying his talents to full effect. Another highlight is his performance of the Rameau harpsichord pieces where execution of the ornaments takes on much importance and Raphael executes them brilliantly. The biggest surprise may be his virtuosic performance of the Rachmaninov prelude which ends the program. All in all this is an outstanding Naxos debut from a fascinating young musician.
Read more
One person found this helpful
Helpful
Comment Report abuse
See all reviews