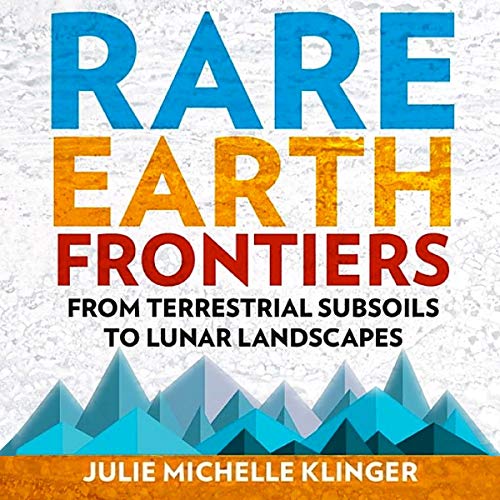 List Price: $24.95
You Save: $2.96 (12%)
By completing your purchase, you agree to Audible’s Conditions Of Use
Sold and delivered by Audible, an Amazon company
Share

Johny Five
2.0 out of 5 stars Really a Geopolitics Book
Reviewed in the United States on August 25, 2020
Verified Purchase
Two stars for effort. I bought this book to learn more about rare earth mining from a technical, environmental, and business perspective. However, from the chapters I’ve read, it warms you up with excitement then ruins it by spending most of the chapter on geopolitics. Not only that, it keeps repeating the same things over and over again.

Kyle B.Top Contributor: Philosophy
VINE VOICE
3.0 out of 5 stars Good Information, but Overly Academic Presentation (for me)
Reviewed in the United States on April 24, 2021
This is a tough-to-review book for me, because while the actual information presented in it is quite good, the style is not at all to my taste. The idea that rare earth mining locations are dictated by more than pure economic viability of a mine is not exactly super revelatory, but the author makes a comprehensive case that political, military, and expansionist reasons are also extremely important reasons for the present and likely future rare earth mining locations. It also has good explanations of the non-rarity of rare earths, how they formed in the Earth's crust, a history of mining rare earths, and a summary of possible rare earth mining locations.

What subtracts from the book for me is the extremely academic prose, and the repetitiveness of some of the arguments. You have many passages like (pp. 13-14) "The frontier is also used literally to refer to a place, whether the place is an ambiguous zone or a Cartesian line. Such places are also ideations, but they are ideations to which people give meaning through enforcement mechanisms in specific places. A frontier always refers to a real and imagined place ... These dialectical characteristics of the frontier-literal an figurative, real and imagined, material and meaningful-are co-constituted with the exercise of state and corporate power."
If you enjoy reading this type of prose, then the book will certainly be more appetizing than it is for me. I do wonder if the academic prose contributes to repeating points (the one good thing about it is that unclear points become clearer when they are rewritten in slight ways multiple times).

My other critique is that the moon really does not fit into the author's thesis as neatly as presented, and the book's argument would be stronger if it straightforwardly acknowledged this. The idea of the moon as a frontier/border for countries to show off power and gain resources is well-taken, but when the argument is (p.200) "Frontiers are seldom as empty as aspiring conquerors would claim. Where frontiers are not populated with people, they are imbued with collectively held meanings" you know the argument is perhaps not so straightforward and is getting a bit too abstract. As I am not knowledgeable about space law, I don't know about Klinger's interpretations of the Outer Space Treaty and the Moon Treaty, but am not convinced by the book's arguments (the author's argument that the Moon Treaty is "international law" is a bit suspect even from just reading the Wikipedia page; it also seems unlikely to me that a treaty ratified by 5 countries [and I don't believe any permanent members of the UN] could be legally binding internationally). The arguments about the necessity and consequences of mining the moon are well laid-out, if clearly biased in favor of international over private/corporate exploration.

Thus, overall, I can't say I'd recommend the book. I think if you simply know that rare earths are not rare, but that processing rare earths is difficult [China has a lot invested in their project besides selling rare earths which enables them to retain a de facto monopoly], you'll come away with the main takeaway. The history is covered well with the author clearly telling and showing certain biases (neo-liberalism is often implied to have mostly bad consequences, for example). This opinionated writing isn't actually all that bad, since Klinger is upfront about where the story came from and what stance it is being told from. Still, there were too many times I wish the author had not used "academicese" rather than more straightforward prose to call it enjoyable to read.
Read more
One person found this helpful
Helpful
Report abuse
See all reviews

Liam Kelleher
5.0 out of 5 stars An extremely informative and high quality geopolitical take on rare earth metals
Reviewed in the United Kingdom on May 22, 2020
Verified Purchase
I naively believed that rare earth metals was a broad brush saying for many metals in today's world. The book quickly dispels this - rare earth metals are defined as the Lanthanides which the author nicely demonstrates where they sit in the Periodic table. To be honest I'd really only heard of Neodymium, in their use in magnets.

While I was getting excited by the scientific detail and both price and production statistics, the book moves away from the scientific primer into a geopolitical discussion. While the US and even Europe had substantial rare earth metal production, the environmental cost was/is pretty staggering. The implementation of tighter environmental restrictions meant lower production costs in China put an end to western dominance.

The book stops off first in China (or Inner Mongolia) at the Bayan Obo mine. Its a really interesting history of that region of China and how the overlapping interests of the Communist Russians and Mao developed the area and mining took off. Yet, the production of rare earths has had a diabolical effect on the local population, with major incidence of cancers, arsenic poisoning and fluorosis.

As China came to dominate global production, disputes between the Western powers and China resulted in tariffs being laid upon Chinese exports, massively driving up prices. This drove the narrative that rare-earths were rare and caused western powers to seek out new sources. The Amazon, Greenland and even the Moon are now the target of rare-earth exploitation. The book takes the narrative that rare earths are not rare at all and most of this is political showboating. They are however, extremely difficult to produce, particularly without a sizeable environmental impact. Greater co-operation between east and west is needed rather than political posturing.

For me personally, I would have preferred a book with a lot more detail on the elements themselves - how are they processed, what are all them used for etc. Though it seems from the authors recommendations a book called Elements of Power by David Abraham may already have covered that.

But if you are interested in the geopolitical background, issues on environmental and land rights, this book is truly excellent. It is quite scholarly but I mean that in a good way - the quality of research and writing are top notch. No sentence is inserted without something to say. I even learned some fascinating historical nuggets along the way.

My knowledge of rare earths, how we got here and our current outlook, is immensely ameliorated.
Read more
One person found this helpful
Report abuse
See all reviews
Back to top
Get to Know Us
Make Money with Us
Amazon Payment Products
Let Us Help You
EnglishChoose a language for shopping. United StatesChoose a country/region for shopping.
© 1996-2021, Amazon.com, Inc. or its affiliates