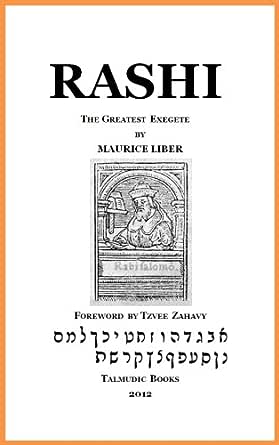 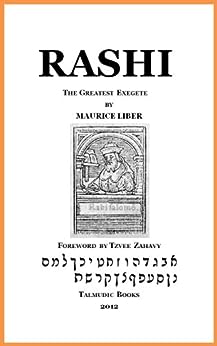 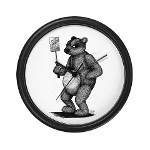 Maurice Liber's 1906 biography of Rashi is one of the classics of the biography genre. It explores not only the life of one of the most important rabbis in Judaism, but also his impact on future generations.

You need to buy the DYbbuk Press version of this book. This book is not the Dybbuk Press version. It was not formatted and it does not include the excellent foreword by Tim Lieder --This text refers to an alternate kindle_edition edition.

CliffB
5.0 out of 5 stars Rashi’s Methods
Reviewed in the United States on November 7, 2017
Verified Purchase
An interesting description of Rashi’s methods for preparing his commentary on the various books of Tanach the Talmud, and the content of his Responsa. As the author notes Rashi’s commentaries are generally easy to understand — which is why he is so well liked and widely read.

For those who are familiar with Rashi and have read his commentary, the author’s description as to how he believes Rashi constructed / structured his various commentary, depending on the source he used is rather interesting and informative. The author concentrates on / writes about method — with some examples.

Anyone wishing to read Rashi’s commentary will have to purchase the books of Tanach continuing his commentaries. If one is interested in how Rashi conceptually came to the conclusions to which he came, this book can provide that understanding.
Read more
3 people found this helpful
Helpful
Report abuse

Michael Foret
5.0 out of 5 stars A good life of a great man
Reviewed in the United States on July 6, 2013
Verified Purchase
Beginning several years ago as I read more and more about the Bible, Biblical scholarship, the relationship between Jewish and Christian Biblical scholarship, and the problem of translating the Bible from the earliest known manuscripts into modern languages, one name in particular kept coming up: Rashi. Rashi is shorthand for Rabbi Schlomo Yitzhaki, a natives of Troyes, Champagne (modern-day France) who lived from 1040 to 1105.

The Jewish Bible was already old during that amazing century in which Jesus, Gamaliel, Hillel and Paul lived, and which saw the destruction of the Second Temple, the rise of rabbinical Judaism, and the emergence of Christianity. Until that time all Biblical scholarship was oral, but after the destruction of the Temple and everything else that was occurring, rabbis--which is to say, scholars--began to write commentaries on the Bible and other kinds of works. Rashi became one of the greatest rabbinical scholars, not just of his day, but of any day.

This biography was written over a century ago, and it reads like it. In other words, its slow going, and generally not organized as we expect today. On the other hand, if you work through it, you will be well rewarded. Author Liber places Rashi in the Jewish community of his day and time, and just as importantly, places that Jewish community in the context of Christian Europe. Liber tells us about the man, his character, and what we do know of the kinds of details we want in a biography. Liber also relates some of the fantastic tall tales and legends that survive about Rashi, and if he does so wryly, its because he realizes those kind of tales tell us something important too about a man and his times too. Rashi's lifetime coincided with the Norman Conquest of Britain and the first Crusade; Saint Bernard of Clairvaux was born a half-century later, but not far away. That amazing time is part of what made all of us who we are today.

Rashi belongs to a very rarefied and select group of scholars whose work is important after nine hundred years not only because of its influence over the centuries, but as a resource material that is as indispensable today as it was then for the serious study of the Bible. No Jew can study their Bible seriously without Rashi's commentaries. Rashi is not important only or mainly because of his influence on Christian Biblical scholarship from his own day to ours, but that influence is as great as it is generally unrecognized.

I like Rashi, and I like this book about him.
Read more
9 people found this helpful
Helpful
Report abuse

Harriet Brown
5.0 out of 5 stars Rashi
Reviewed in the United States on October 26, 2016
Verified Purchase
Rashi by Maurice Liber. Is an interesting book. But, it is difficult. I might have to read it again. I think that it is important to read this book. I highly recommend this book.
Read more
2 people found this helpful
Helpful
Report abuse

Gary Hainsworth
4.0 out of 5 stars A Valuable Resource
Reviewed in the United States on October 7, 2012
Verified Purchase
This book of not so many pages is loaded with a tremendous amount of insight. If you want a good profile of the famous commentator this coupled with Eli Wiesel's biography of him are valuable resources. This book is also a very good history about France during the Capachian period. I would recommend this book.
Read more
3 people found this helpful
Helpful
Report abuse

Oliver
5.0 out of 5 stars Amazing Read
Reviewed in the United States on May 3, 2017
Verified Purchase
Ecellent book of this great Rabbi. Loved it.
Read more
One person found this helpful
Helpful
Report abuse

Jashryn
3.0 out of 5 stars Not Sure
Reviewed in the United States on May 29, 2014
Verified Purchase
The writing in this book did not really help me to understand Rashi as I thought it would. This may not be the author's writing it might be that I do not have the background with which to understand the context of the subject.
Read more
2 people found this helpful
Helpful
Report abuse

Monica Gottfried
3.0 out of 5 stars Rashi
Reviewed in the United States on June 11, 2014
Verified Purchase
I am in the middle of reading this book, and it is kind of boring and some of the text can get repetitive, but it is very informing on understanding the time and mind of Rashi.
Read more
One person found this helpful
Helpful
Report abuse

Jason Levi
5.0 out of 5 stars Excellent
Reviewed in the United States on January 21, 2014
Verified Purchase
Always wanted know more this great Jewish teacher and scholar whose influences in Jewish theology after over 900 years after his death is greatly felt. Great book.
Read more
Helpful
Report abuse
See all reviews

Dr. theol. Park,Sey Jong
5.0 out of 5 stars Five Stars
Reviewed in Canada on December 15, 2017
Verified Purchase
good quality
Read more
Report abuse
See all reviews
Back to top
Get to Know Us
Make Money with Us
Amazon Payment Products
Let Us Help You
EnglishChoose a language for shopping. United StatesChoose a country/region for shopping.
© 1996-2021, Amazon.com, Inc. or its affiliates