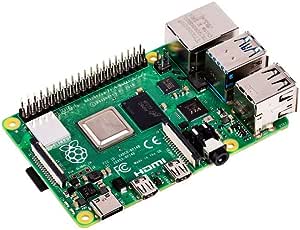 Raspberry Pi 4 Model B is the latest product in the popular Raspberry Pi range of computers. It offers ground-breaking increases in processor speed, multimedia performance, memory, and connectivity compared to the prior-generation Raspberry Pi 3 Model B+, while retaining backwards compatibility and similar power consumption. For the end user, Raspberry Pi 4 Model B provides desktop performance comparable to entry-level x86 PC systems. This product’s key features include a high-performance 64-bit quad-core processor, dual-display support at resolutions up to 4K via a pair of micro-HDMI ports, hardware video decode at up to 4Kp60, 2GB of RAM, dual-band 2.4/5.0 GHz wireless LAN, Bluetooth 5.0, Gigabit Ethernet, USB 3.0, and PoE capability (via a separate PoE HAT add-on). The dual-band wireless LAN and Bluetooth have modular compliance certification, allowing the board to be designed into end products with significantly reduced compliance testing, improving both cost and time to market.

4.7 out of 5 stars
4.7 out of 5
143 global ratings
How are ratings calculated?
To calculate the overall star rating and percentage breakdown by star, we don’t use a simple average. Instead, our system considers things like how recent a review is and if the reviewer bought the item on Amazon. It also analyzes reviews to verify trustworthiness.
Top reviews

Katybug
1.0 out of 5 stars Price Gouging
Reviewed in the United States on August 4, 2019
Size: 2GB
1gb models are $35, 2gb are $45, 4gb are $55. Don't buy this product. You are being scammed for this price.
Read more
26 people found this helpful
Helpful
Comment Report abuse
See all reviews

Phoebe J
5.0 out of 5 stars The Raspberry Pi Evolution continues
Reviewed in the United Kingdom on July 19, 2019
Size: 2GBVerified Purchase
The new Pi is quite an exciting product to use. I had already installed and used the latest version of the operating system, Raspbian Debian Buster, on an SD card and used that on my Pi 3 Model B+, so when I switched the 4B on with that same SD card I was astonished with how fast I arrived at the desktop. Even the splash screen appeared and vanished so quickly it couldn't register in my eyes. I'd heard that SD card read speed had been improved, but this was amazing.

The Raspberry Pi 4 Model B is certainly more powerful, faster, and adds features that the Pi community have been asking for - true Gigabit Ethernet, USB 3.0 ports, Faster Ram - while retaining as much backwards compatibility as possible so that existing educational and experimental kits can still be used.

Because of the increased speed, memory and connectivity the Pi 4B becomes quite an interesting little desktop computer, with a huge range of office, image-processing, video editing and music software available for download.

As with previous models the Pi Foundation has found ways to cram more onto the board, which means moving some ports and support chips around, so the 3rd-party add-on market will be adapting their products - new cases, PSUs, cooling solutions etc. In particular, heatsinks for the previous models of the Raspberry Pi are not fully compatible with this edition, either not covering the full surface area, or not making proper contact because of surrounding obstructions, so I've had to order a new set with a long wait for delivery.

[ Edit: I now have heatsinks for the 4 major hotspots on the board, and with these in place even a Pi-Fan can keep the 4B running at a reasonable temperature. Be advised that the official case for the 4B has no ventilation, so it runs hot at 75c even when idle unless you keep the lid off. Now back to my review. ]

The retro-gaming community are excited too, and clamouring for their favourite emulation software to be adapted to work with the added memory and processing power.

All this being said, the Model 4B is still being worked on and tweaked (the firmware can be updated to further refine the board's operating capabilities), so it may take a little while before your favourite thing to do with a Pi is up-and-running, but it isn't as if those things appeared overnight with the previous models.

Oh, and Some Assembly Required.

Paul Milligan
5.0 out of 5 stars Extra memory and speed makes this a viable linux desktop
Reviewed in the United Kingdom on August 13, 2019
Size: 2GBVerified Purchase
Purchased 2Gb because 4Gb model in short supply but the 2GB is perfect for general use. Have tried running with several open tabs including Chrome browser and youtube videos. Fast enough to be 'not annoying' which, for the price, is not bad. Have used GeekPi acrylic case with fan and am able to overclock to 1750MHz and still run cool.
Read more
4 people found this helpful
Report abuse

Ignore alien orders
5.0 out of 5 stars Don’t buy for OSMC
Reviewed in the United Kingdom on January 26, 2020
Size: 2GBVerified Purchase
Super bit of kit. At first I thought they weren’t really that stable, but that turned out to be a faulty unit. After getting another unit I’m currently at 93 days uptime.

Just be careful that the version 4 is suitable for your needs. OSMC isn’t currently compatible with the 4 so stick to the 3 for that.
Read more
Report abuse

Richard
4.0 out of 5 stars Excellent once you get it running.
Reviewed in the United Kingdom on February 23, 2020
Size: 2GBVerified Purchase
Does what it is supposed to do, but was difficult to set up initially. The HDMI ports don't work at 1080p by default and require a download from the website to sort it out so some bling work needs done first if you plan to use a TV.
A PC monitor should auto-switch ok tho.
Read more
Report abuse
See all reviews

Page 1 of 1 Start overPage 1 of 1
This shopping feature will continue to load items when the Enter key is pressed. In order to navigate out of this carousel please use your heading shortcut key to navigate to the next or previous heading.
Back
Next
Pages with related products. See and discover other items: Raspberry Pi Computers