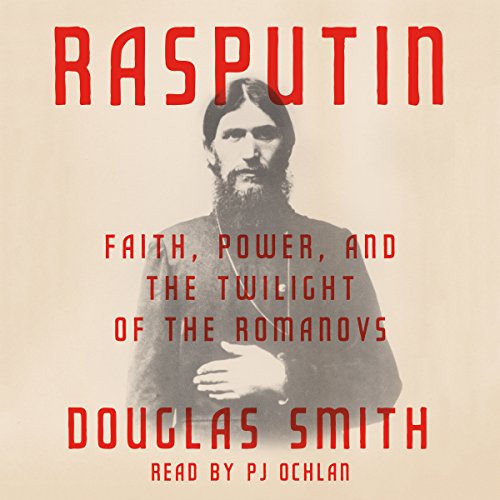 Rasputin: Faith, Power, and the Twilight of the Romanovs

List Price: $47.24
You Save: $5.90 (12%)
By completing your purchase, you agree to Audible’s Conditions Of Use
Sold and delivered by Audible, an Amazon company
Share

4.5 out of 5 stars
4.5 out of 5
294 global ratings
How are ratings calculated?
To calculate the overall star rating and percentage breakdown by star, we don’t use a simple average. Instead, our system considers things like how recent a review is and if the reviewer bought the item on Amazon. It also analyzes reviews to verify trustworthiness.

Clay GarnerTop Contributor: Philosophy
TOP 1000 REVIEWER
5.0 out of 5 stars ''Rasputin’s story is a tragedy - and in his bloody, violent end, we can discern the story of Russia in the twentieth century.''
Reviewed in the United States on November 23, 2016
Verified Purchase
Smith presents a detailed, day-to-day explanation of Rasputin. However, this work is more than just a description of Rasputin's life. Smith covers various aspects of prewar Russian culture. Analyses the Romanov family, the Orthodox clergy, the peasant reaction, the Russian aristocracy, the fascination with the occult, all by Rasputin's life.

From introduction - ''Rasputin’s story is a tragedy, and not just that of one man but of an entire nation, for in his life—with its complicated struggles about faith and morality, about pleasure and sin, about tradition and change, about duty and power, and their limits—and in his bloody, violent end, we can discern the story of Russia itself in the early twentieth century. Rasputin was neither a devil nor a saint, but this made him no less remarkable and his life no less important to the twilight of tsarist Russia.''

Smith explains Rasputin's beginning as a holy man - ''Stranniki , holy wanderers or religious pilgrims, were a common sight in old Russia. Throughout the eighteenth and nineteenth centuries, the idea of undertaking pilgrimages to holy places was widespread, among the rich and poor. If the rich could afford to travel by carriage, the poor had to make do with their own two feet, a knapsack in their hands. Wandering from village to village, the pilgrims relied on the generosity of strangers for food and a place to stay for the night.'' (22)

This insight helped me understand Rasputin's role was a common one, not unique to him. He just played it better than others.

''Often, however, they went hungry and slept out under the stars. They dressed in little more than rags and were typically barefoot. Many wore fetters. It was not an easy life. In 1900, there were about a million pilgrims in Russia, forever wandering from one holy place to the next in search of salvation and enlightenment. As they went the pilgrims would repeat the Jesus Prayer: “Lord Jesus Christ, Son of God, have mercy on me, a sinner.” (22)

This drive to mysticism, to the occult, to extremes, added real insight to the Russian mind. It provided a way to understand Rasputin's influence (and maybe Lenin’s).

Smith explains - ''I knew from the beginning that the only chance I had to get closer to the true Rasputin was to go back to the archives, to seek out the documents created during his lifetime before the myth of Rasputin had fully taken shape. It proved an unusually arduous undertaking. The trail led me to seven countries, from Siberia and Russia, across Europe, to Britain, and finally the United States. The first obligation of every biog-rapher is to establish the objective, external facts of a life, something that has been lacking in our knowledge of Rasputin. And so I sought every bit of information that could place Rasputin squarely in his world: where he was on any given day, what he was doing, whom he met, what they discussed. I wanted to track Rasputin through time, to drag him out of the ether of myth and down into the banalities of daily life.''

Smith has done this here. In fact, he provides so much detail on the "banalities of life' that many pages are just that - banal.

''This, it seemed to me, was the only way to extricate Rasputin the man from Rasputin the legend. A curious thing happened, however, as I was following the footsteps of this elusive, real Rasputin. The deeper I went into my research, the more convinced I became that one of the most important facts about Rasputin, the thing that made him such an extraordinary and powerful figure, was less what he was doing and more what everyone thought he was doing.''

The extensive research is astounding. Many times I puzzle, 'How can he know that?' Hundreds of players are described and quoted. Various explanations are offered for events. Who can know for sure? The amount of gossip and slander is overwhelming. Who can absorb it?

This work could serve as a textbook in Russian history. Does not read like a novel, perhaps closer to a court document. Was Rasputin holy man, a devil, or a holy devil?

Angela Ellis
5.0 out of 5 stars Turning Russian history into an accessible page-turner is no easy feat!
Reviewed in the United States on December 4, 2016
Verified Purchase
Having known little about Rasputin and even less about the times in which he lived, I was a little concerned that this incredibly thorough telling of his life would be more of an academic read than I was looking for. But I was pleasantly surprised to find a page turner that weaves a riveting tale of an intriguing, scandalous and mysterious man to rival any of the historical FICTION novels I favor. Besides the fact that Rasputin's life is filled with (many unfounded and often slanderous) stories of tabloid-worthy debauchery, the way his life is given context in the waning world of the Romanovs is equally fascinating. I definitely recommend this book to anyone looking for a well-written, accessible and interesting book.
Read more
53 people found this helpful
Helpful
Report abuse

Romanov Fan
5.0 out of 5 stars A well-researched and written look at a controversial historical figure.
Reviewed in the United States on November 23, 2016
Verified Purchase
A wonderful and well-written history of a complicated and enigmatic historical figure. Refusing to repeat the same narratives promoted by discounted sources, Smith examines new Russian sources and unexamined documents to form a fuller and more complex portrait of Grigorii Rasputin-Novy.

With such a mercurial and misrepresented character, and one upon whom many people have projected feelings and interpretations, it allows the reader to see for themselves the consistent characterizations: that he was utterly sincere, charismatic, loving, and deeply loving, but neither evil nor political in the way he has been characterized.

What it truly reveals is the odious rot at the fringes of the Imperial family as well as in pre-revolutionary Russian society in general. Heartbreaking -- heartbreaking and familiar.
Read more
53 people found this helpful
Helpful
Report abuse
See all reviews

Vlad Thelad
4.0 out of 5 stars Painstakingly detailed
Reviewed in Canada on April 21, 2017
Verified Purchase
This character sure belongs to the group of the most mythologized historical figures. From the embodiment of debauchery to the holiest of holies, responsible for the demise of the Romanov dynasty or its failed saviour, his persona, actions and relevance have been abundantly debated, told, retold and fictionalized. This book re-examines every episode of Rasputin’s life, painstakingly searching through layer upon layer of distortion and improbability to reveal a truthful account of facts. This process, commendable as it is, becomes a rather boring read after a while. Barely a hundred years from his death, the fact remains that authoritarian and ignorance-driven regimes are the ideal breeding ground for characters like this and the power they can yield. There has been no shortage of either since.
Read more
2 people found this helpful
Report abuse

Carolyn
4.0 out of 5 stars clairvoyants and religious fanatics and was easily influenced by the arrival of Rasputin at the palace
Reviewed in Canada on May 25, 2017
Verified Purchase
The essential book for the historian and scholar researching the life and influence of Rasputin and the end of the Romanov dynasty. 5 stars

A formidable book (of over 800 pages)for the more casual reader of historic biographies. 3 Stars

It relates the facts of Rasputin's life and relationships, but also describes incidents and conversations which the author concludes are partly or entirely false, and details rumors circulating at the time which were exaggerations or falsehoods. Some were deliberately circulated to undermine the royal family.

It was interesting to learn that Rasputin's influence on the imperial family was
even greater than believed. Through Empress Alexandra he usually had his way with political, military, legal and religious appointments, dismissals, banishments, and punishments. Alexandra had a history of being under the spell of Mystics, clairvoyants and religious fanatics and was easily influenced by the arrival of Rasputin at the palace. Czar Nicholas was weak willed, and dominated by his wife who passed on Rasputin's wishes as pleas and orders. He usually fell in line to please Alexandra.

An exhaustive amount of research went into this book. A cast of hundreds of characters made it confusing to me. There was a collection of remarkable photos, political cartoons and posters.
Read more
One person found this helpful
Report abuse

Felipe Vargas
5.0 out of 5 stars The definitive biography about Rasputin
Reviewed in Mexico on November 2, 2018
Verified Purchase
A great biography, excellent bibliography, exhaustive investigation and very beautiful prose and narrative. A book you must have if interested in russian history or biographies in general.
Read more
Report abuse
See all reviews
Back to top
Get to Know Us
Make Money with Us
Amazon Payment Products
Let Us Help You
EnglishChoose a language for shopping. United StatesChoose a country/region for shopping.
© 1996-2021, Amazon.com, Inc. or its affiliates