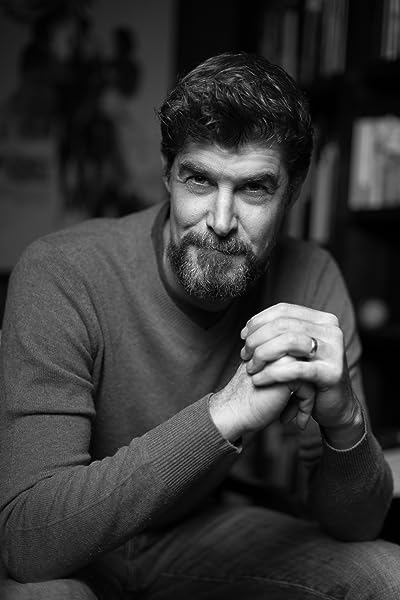 by Doug Tennapel (Author, Illustrator), Katherine Garner (Illustrator)
4.3 out of 5 stars 40 ratings
See all formats and editions
Sorry, there was a problem loading this page. Try again.

Doug TenNapel (born July 10, 1966) makes books and is an artist best known for creating GEAR, Earthworm Jim, The Neverhood, Cardboard and Nickelodeon's Catscratch. His work in animation helped him learn how to draw characters which helped him break into comic books. He worked in television animation and video games which helped sharpen his writing and character creation abilities. He created pixel art for video games for companies like BlueSky, Electronic Arts and Dreamworks.

The most frequent question Doug is asked by kids is, "Where do you get your ideas?" His answer is that he usually gets his ideas from things he loves: his friends, animals and classic literature.

Doug is 6'8" and does not play basketball. Due to his height, Doug often has characters that are at odds with their environment. So many readers of Doug's books said they could relate to his stories no matter their background, that Doug realized NEARLY EVERYONE feels out of place in some way. He believes this is the secret to his stories speaking to so many different kinds of people around the world.

Doug TenNapel has been married for twenty seven years to a magical woman he refers to as "the Beloved Mrs. TenNapel" and they have four children (two girls and two boys) aged ten to sixteen. Doug has a sense of wonder about even the most normal aspects of the world and tries to bring a fresh look at our lives to show that they are actually miraculously amazing. His favorite author is G.K. Chesterton who wrote books like Orthodoxy and The Everlasting Man which had influence on C.S. Lewis and Tolkien.

Doug has completed five marathons, raises amphibians as pets art, loves to fish, paints in oils, has worked on ten video games and authored over sixteen graphic novels! He has a Facebook page in case you want to see his live art sessions.

john washington
5.0 out of 5 stars great all around
Reviewed in the United States 🇺🇸 on May 15, 2022
Verified Purchase
great book, always amazed at how fun, over the top, creative Tennapel can get, yet have a depth that most others don't or can't bring to their work. a lot of humor, action, but plenty for the heart and brain here too.
Read more
Helpful
Report abuse

spectrumfox
5.0 out of 5 stars The Most Insane Fun I've Had Reading Comics
Reviewed in the United States 🇺🇸 on December 16, 2013
Verified Purchase
This comic has it all. Allow me to break it down.

Ratfist began as a webcomic that released one page a day, so there is a gag at the end of almost every page. In this way, it kept me constantly laughing. Not all of the humor is simple gags, however. TenNapel takes shots at everything from politics to religion (but not in an offensive way) and also includes plenty of situational humor. Even some of the illustrations made me laugh; they can be crazy!

The art style is chaotic, but not sloppy. The colors are spectacular. As an cartoonist myself, I was able to greatly enjoy its beauty while reading. The characters are very expressive.

The story is interesting. It starts off being relatable, being about a relationship, but then it gets crazy, then crazier, then insanity ensues, but closes quietly - the ending is so touching it almost made me cry.

I highly recommend this book to anyone who isn't uber-sensitive to political or religious issues (you'd have to be pretty serious to be offended by this light-hearted humor, though). It's worth the money, and is readable multiple times (I keep discovering deeper ideas re-reading it).

LPetal86
4.0 out of 5 stars A Must-Read for Fans of Doug TenNapel and Comics in General
Reviewed in the United States 🇺🇸 on November 7, 2015
Verified Purchase
A very interesting, semi-autobiographical work of Doug TenNapel, the creator of Earthworm Jim and other eccentric and memorable characters. The story addresses a lot of issues affecting modern America today, with some subtle and strong satire commentating on things like how the current generation of Americans have become largely self-obsessed and need to grow up a bit. Doug develops the main character very well, and his sharp, eye-catching artwork pleases (and kudos to his colorist, Katherine Garner, as well!). My only complaint is the pacing felt a bit rushed in places, but I would recommend this book nonetheless to someone looking for an interesting take on politics, religion, learning to be selfless, and contemplating the meaning of life.
Read more
2 people found this helpful
Helpful
Report abuse

Moose Moose
5.0 out of 5 stars Man oh man! Great story!
Reviewed in the United States 🇺🇸 on February 5, 2012
Verified Purchase
While reading this comic online my son and I had absolutely no idea where it was going -- this is typical of the roller-coaster adventures that Doug is known for.

Because it's Doug you know that the story will take care of you and bring it all together to a satisfying end.

As insane and ridiculous as the setup and universe is that he creates, the story ends very seriously, with themes of sacrifice, friendship and courage.

If I had to tell you what it was about in one sentence, it would go something like this:

Even the most selfish of us can surprise and confuse those who think that honor, love, and hope are fictional.

The book has all sorts of extras as mentioned in the description. I poured over the web comic when it was online -- but I am very glad to have the book in my collection.

If you haven't read anything from TenNapel, this could be a good first graphic novel to tryout.
Read more
3 people found this helpful
Helpful
Report abuse

S. Tarpley
2.0 out of 5 stars Like two friends that need a friend but don't really understand each other.
Reviewed in the United States 🇺🇸 on March 8, 2019
Verified Purchase
Dumb. Arts good but that's what artists do. Nice cools. Dumb story. Tries to dumb the offender. Read it. I think that's the intent. Jokes are Offensively non-offencive. Like to friends that really want to be friends but don't really know each other that well. They have a hard time communicating, they joke around but don't really want to offend the other. Is this ok? This is funny right? No? Yeah? Were still friends right? Man I didn't mean that.
Read more
Helpful
Report abuse

Christian
5.0 out of 5 stars Doug Tennapel = Genious
Reviewed in the United States 🇺🇸 on February 24, 2013
Verified Purchase
Just another awesome book from Doug Tennapel. This book builds on the already impressive collection of stories that just suck you into hilarious and beautifully drawn worlds. Buy this, you won't be disappointed.
Read more
One person found this helpful
Helpful
Report abuse

Jeff Felson
5.0 out of 5 stars Better than Batman
Reviewed in the United States 🇺🇸 on July 17, 2014
Verified Purchase
Better than Batman, much more exciting than Spiderman!!! Get your hands on this and read!!! I mean it ... Buy this book! Marvel and DC will be jealous!
Read more
One person found this helpful
Helpful
Report abuse
See all reviews

Ian Bron
2.0 out of 5 stars Stick to the fun stuff
Reviewed in Canada 🇨🇦 on January 26, 2015
Verified Purchase
Pseudo / neoliberal economics wrapped up in absurd morality. This is especially disappointing as the author's earlier works were a lot of fun.
Read more
Report abuse
See all reviews