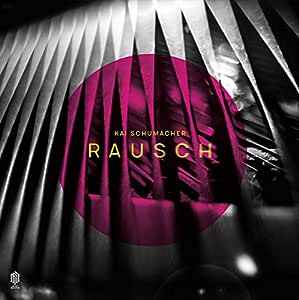 Pianist Kai Schumacher is a highly acclaimed crossover artist between classical, avant-garde and pop. With this album 'Rausch' the focus is on his very own compositions for the first time. No over-dubs, no electronics. Instead, he has prepared his instrument, with which he performs handmade, percussive sounds. Even the choice of words for the eight compositions goes beyond the usual format. Song titles such as 'Kantholz' or 'BRNFCK' would be more likely to be in the realm of metal or techno, and even 'Rausch' (a state of euphoria) as the title of the album is open for ambiguities. Is it about excess? Should the sober everyday world be blurred by the music? Do we find ourselves in a state of sensual exaggeration when we listen? Kai Schumacher makes the conditions dance, lets them float, plays a game with acoustic perception. On 'Rausch' Schumacher docks with energy and vigour to the present time.

Fanfare Magazine
4.0 out of 5 stars Fun and sonic wizardry usurps substance
Reviewed in the United States on May 19, 2020
Marc Medwin, Fanfare magazine

If you’re unfamiliar with Kai Schumacher’s genre-bending exploits of the last several years, as was I, this disc will only fill you in partially concerning his pop, metal, and classical pedigree, but it will introduce his own compositions into a complex mix. Even having said that, the playing style and his use, or exploitation, of the piano should constitute signposts toward unconventional music-making. As we will see, this yields sadly mixed results.
The titular piece, Rausch, is a six-minute romp, complete with occasional Mahlerian silences, through a frankly rather insipid series of chord changes that conjure shades of Jean-Michel Jarre’s Ethnicolor. That grumble aside, what Schumacher does with articulation, speed and timbre is really quite fascinating. He ultimately achieves dare-devil dynamic slopes akin to the precision of Blind Willy Johnson’s slide technique in the service of razor-sharp articulation. He is helped, quite obviously, by the forward-thrust of his piano’s tone, but his skill and dexterity are evident; it is to his credit that he brings each long phrase to a satisfactory conclusion, even given the banality of the harmonic material. The disc is bookended by the gorgeous and probably ironically titled Euphobia, which demonstrates, when called for, that some harmonic interest is evident. Completely delivered at a low dynamic level, the piano tone throbs with sentiment as the Chopinesquely arpeggiated left hand allows the right to emote; only the snarky ending pitch, obviously electronically reversed, puts the piece more in Poulenc territory than that of the fabled Polish master.
What happens in between these two points of contact is another story. As the album proceeds, and especially on repeated listening, obvious technical prowess and sonic novelties aside, I have the sneaking suspicion that I am being taken for the proverbial ride. Naming a piece Brnfck is just fine, except that the piece is not what its title portends. Here again, we have some of that simplistic harmony amidst the rhythmic pyrotechnics of techno or house. Despite upper register harmonics and whatever’s making that tapping rhythm, substance seems to be subservient to the power tools of the trade. The same goes for Bacchanale, whose funky timbres and rhythms do little to support dots and planes constituting a harmonic wasteland. If I want to hear music like this, why do I need an obviously talented pianist to make it? If that is what the music needs, could we please venture, maybe taking a page from Squarepusher’s book, beyond such a narrow field of harmonic invention?
The disc is fun and sometimes even touching, but as a composer investigating what follows on the heels of Minimalism, Schumacher sacrifices musical invention to the seductive whims of admittedly fancy piano preparation.