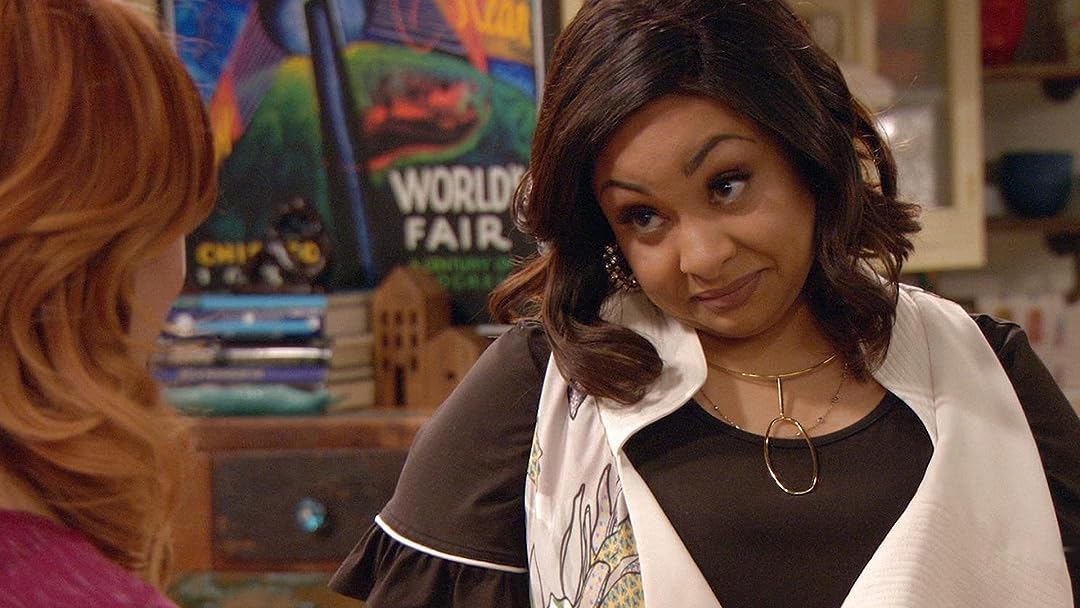 Amari SaliReviewed in the United States on October 29, 2017
4.0 out of 5 stars
After being away for nearly a decade, Raven Symone returns to the Disney Channel and quickly adapts to its new style.
Verified purchase
Highlights

The Evolution of Chelsea

With it being 10 years since That’s So Raven [External] ended, naturally there was a period where of getting reintroduced to who old characters were and how the last ten years changed them. Which was difficult with Chelsea. If only because she was shown as the old-school Disney parent. You know, the absent-minded and spacey parent as Raven played the responsible one. However, as time went on, the show put a spin on that.

Arguably, and I think it is a good argument, Chelsea being ditzy wasn’t a personality trait but more so her means of dealing with her horrible divorce. One which took her from likely a millionaire to broke. A drastic change which would mess anyone up, especially since it was the man she loved who robbed her blind and was going to run off with some woman. Said trauma showed itself through her spacing out as she probably got her bearings together.

But when she got to take control over something, the school dance for her kids, we saw her snap out of it. With that moment, being in command, managing a team, and calling the shots, alongside Raven’s help, goodbye being the dumb parent. Now, Chelsea is just the one struggling to get a job but pulling her weight by taking care of the household.

Laughing To Keep From Crying

While That’s So Raven had its tentpole real moments, like the racism episode or the one dealing with weight, it is/was mostly known for being a comedy. In Raven’s Home, there is a more laugh to keep from crying atmosphere – especially when it comes to Raven and Chelsea. There are jokes about their divorces, money, and a lot of making light of a less than stellar household.

With that, you see a healthy mesh of Raven’s hijinks which made That’s So Raven a hit mixed in with the more modern, pseudo-mature, Disney. Of which addresses real-world issues more consistently throughout a season vs. just having special episodes.

It Wasn’t All About The Kids

As I will probably note for as long as I find myself watching The Disney Channel, I strongly feel the success of Girl Meets World is what led to a shift on the network. Of which you can ever see in Raven’s Home. One of the shifts is that we have parents and children who are dealing with stuff. Like the aforementioned Levi learning his dad isn’t this business savvy dude but a bit of a bastard. That storyline was just as much about Chelsea dealing with her trauma and how to approach Levi learning about his father as it was Levi learning the truth.

Said balance wasn’t in Girl Meet’s World. It was barely about the lead-ins, that being Cory and Topanga, as it was about the next generation. Though, perhaps the real thing which I believe is Girl Meet’s World’s long-term influence is showing and having more complicated stories for kid actors. One which quickly comes to mind is how Nia deals with Raven favoring Booker. This is directly addressed to her and she notes it is because she has to worry about Nia less, because Booker is the type of kid who gets things stuck on his head. Yet, as we learn Booker has visions, among other things, you continue to see Nia feel like a red headed step child and rely on Tess to see her and validate her existence.

An analysis I don’t think a lot of shows, pre-Girl Meets World, consistently gave you until you go back to when That’s So Raven was on the air.

Piggybacking off the last topic, one of the things fans of That’s So Raven should love is that the adults get their own lives away from their kids. One example being Raven working at a dog fashion company and hating it. Yet, because bills got to be paid, she keeps at it. Plus, it is sort of adjacent to her real dream of designing for people.

Something noteworthy to me since I think the storyline could directly speak to those who grew up on That’s So Raven. The idea of not necessarily finding your dream job but look at you. You got a job, period. Never mind you can pay your own bills? You’re getting there. You may not be where you want but, like we see with Raven, all that matters is you don’t let the dream die. For all it takes it being ready for that lucky moment that could change your life.

Nia Underutilized & Too Much Booker

Sadly, because Nia’s actress, Navia Ziraili Robinson is on this show and Free Reign, plus child labor laws, she wasn’t in Raven’s Home much. Which kind of sucked since while Booker was being the usual dim-witted and comical brother, with an occasional heart of gold, Nia was the one who had this relatable vibe. Be it her clearly not being the favorite of the parent she lives with, being kind of awkward, yet still loved and not alone, there was normalcy with Nia. Not to say she didn’t get into the occasional hijinks, thanks to her brother, or had weird moments, like when she liked this new neighbor but considering all that was going on in Raven’s Home, Nia seemed like a grounding force.

Which made her being underutilized unfortunate.

Though, since episode 1, I’ve come to accept Tess isn’t some “white people can be ratchet too” type of character, I gotta admit that I still feel in desperate need of some character development. For while some of her storylines, like being rejected by a guy she liked and how she has become one of the family, has shown she isn’t simply comic relief, there is still the slightest unease with the character. But I think it is just because we don’t know much about Tess’ family besides there seemingly being (possible) murderers and con artist in there.

There are a huge amount of old shows being brought back and more often than not, the question is: Why? Raven’s Home answers that in a multitude of ways. Not just in the form of showing a functioning Black family, which may not have the father in the home, but notes he is still there for his kids. Much less feeding into people’s nostalgia. What Raven’s Home does is present what made Disney such a success with goofy characters getting into nonsense, but adding a shot of realness to easily inject real fears and messages seamlessly. A hard task for shows which cater to adults and probably even more difficult in a show that is on a network dedicated to kids and tweens.

Hence the positive label for Raven’s Home finds that balance. One which allows it to be something the parents can laugh at and relate to as their kids enjoy it too. Plus, it doesn’t have heavy-handed messages but simply presents life as is and addresses things as they come about. Just like they would in reality.

GHReviewed in the United States on July 3, 2019
5.0 out of 5 stars
Awesome Series and Show!!!
Verified purchase
This is one "AWESOME" series and show, Yay Raven's Home!!! My grandchildren love this show!!! Keep them coming and they should bring back Chelsea please, and Raven's Mom, Dad, Brother, Male Friend "Eddie" and some of her schoolmates, teachers and the gangster girls!!! Excellent Series they just keep getting better and better!!!

Callie KemperReviewed in the United States on July 1, 2019
5.0 out of 5 stars
Very nice looking product
Verified purchase
Thank you
One person found this helpful

Dominick NReviewed in the United States on August 24, 2018
5.0 out of 5 stars
Terrific first season! Love everything about it.
Verified purchase
Love that Raven is back! The humor is awesome! The kids get along and like each other and their moms, which is SO refreshing. The stories in the episodes are funny, heartfelt and uplifting. Even the side characters like the coach are funny and not obnoxious. Love this season!
One person found this helpful

Chuck A.Reviewed in the United States on December 8, 2019
5.0 out of 5 stars
Ok
Verified purchase
Ok

Sharon BrandonReviewed in the United States on April 30, 2019
5.0 out of 5 stars
It’s A Movie
Verified purchase
Okay
See all reviews
Back to top
Get to Know Us
Make Money with Us
Amazon Payment Products
Let Us Help You
EnglishChoose a language for shopping. United StatesChoose a country/region for shopping.
© 1996-2022, Amazon.com, Inc. or its affiliates