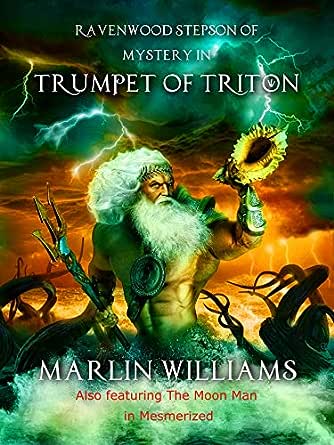 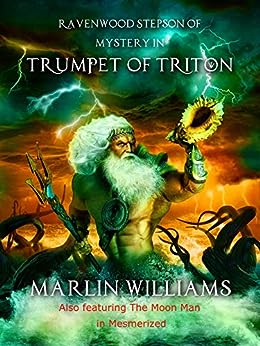 LJS3
4.0 out of 5 stars Excellent
Reviewed in the United States on June 15, 2019
Verified Purchase
If I had a single gripe about Marlin Williams' previous book, the excellent Road Games and Other Weird Tales, it was that the more substantive stories took so long to get moving. If I was worried heading into his newest offering, a pulp fiction two-fer featuring a couple of obscure pulp-era heroes, my fears were allayed on the very first page.

Trumpet of Triton kicks off the book. It features Ravenwood, Stepson of Mystery, a creation of the famous (in pulp fandom circles, anyway) Frederick C. Davis. Ravenwood is an occult detective, a la Carnacki or John Silence, who works cases involving supernatural elements. He's accompanied by his servant, Sterling, and a Tibetan mystic called The Nameless One. Sounds a bit like Dr. Strange, right? Having done a little research prior to writing this review, I discovered I wasn't the first person to make this connection. This point is really irrelevant, for the Ravenwood stories otherwise bear little resemblance to Marvel's Sorcerer Supreme. In fact, it unsurprisingly reads more like the pulp heroes and mystery men of the time period, most notably figures like The Shadow and Robert E. Howard's Steve Harrison.

In this adventure Williams has Ravenwood square off against a shadow organization bent on using an artifact called The Trumpet of Triton to raise the sunken continent of Atlantis from the depths of the sea. Following a few strange encounters and an attack on the city itself, Ravenwood teams with the NYPD to stop the conspiracy in its tracks.

Williams keeps the story lean and the plot laser-focused throughout. He doesn't even bother with chapter breaks, moving from one plot point to the next with no time for the reader to catch his breath.

But of course the most exciting addition he makes has to be Kolchak. That Kolchak, you ask? Maybe, and if it is, it's definitely an alternate universe version of the character. But more likely, since it takes place in 1936, this is Carl Kolchak's father. This character mentions a young son at home, and that would make the son the correct age when we first see him in The Night Stalker in 1972. Whatever the case, he's a dead ringer for the famous investigative reporter, down to his abrasive personality and desire to get at the truth. And let's not forget about the abysmal fashion tastes! It makes for a wonderful surprise twist to the story, and he also makes a fine companion to the rather straight-laced Ravenwood. In fact, I'd much rather see a whole series about him than I would another Ravenwood story. That's nothing against the latter character, it's just that, from the moment Kolchak enters the story, he steals the show in every scene he's in.

The next story is called Mesmerized, featuring another Davis-created character, The Moon Man. Take one look at the silhouette of his character on the cover, and you can see those rip-off artists over at Marvel clearly styled Spider-Man villain, Mysterio, after him. While the supernatural elements were clear from the jump in Trumpet of Triton, the Moon Man more comfortably fits the mystery man category of hero. He has no real powers, save for his anonymity and bullet-proof helmet, and he uses his detective skills and hand-to-hand skills to save the day. The villains here better resemble those you'd find in an Allistair MacClean novel, and the seemingly supernatural wonders are of a scientific nature rather than something occult as Moon Man and his team try to solve a mysterious suicide while at the same time putting the kibosh on a crooked mayoral campaign.

As stated above, both stories are cover to cover thrillers, with absolutely no fat on them at all. Though I enjoyed the Moon Man story more, that's really my preference for science fictional elements to supernatural ones. The action scenes, though sparse in both, are well-written and tense, and there is always a feeling of the plot moving forward. The dialogue zings, and Williams captures the essence of the era, while not appearing to work too hard in doing it. That's the mark of a real craftsman.

In fact, these stories are exact replicas, in both tone and break-neck pacing, of the kinds of magazine stories you'd see back in the pulp era. The feeling of both stories is that they're part of the old novel-a-month output some of the old pulpsters exhibited, and as such there is virtually no character development or attention to worldbuilding like you see in modern product. These stories rely on already-established characters, and are entirely plot-based. Definitely not the kind of fare most modern-day fiction fans tolerate, which makes it all the more precious.

Another word on the style and quality. Most of the time, a writer gets hold of source material like this, and he'll try to put his own stamp on it. But aside from adding Kolchak to the Ravenwood story, you could place these books in between the pages of 10 Ace Detectives, and I wouldn't be able to tell the difference. It's not mere pastiche, either. Williams has painstakingly made these adventures fit the old mold, both as a love letter to the pulps and as a means of possibly continuing both series as he envisions they might have gone, had the magazines not folded. This is a big deal for fans of pulp. It could mean there's a new sheriff in Pulpville, and he's a fitness enthusiast from a small Texas town. That's some big shoes to fill, seeing as how the last guy who fit that description changed popular fiction forever.
Read more
3 people found this helpful
Helpful
Comment Report abuse

Virginia E. Johnson
5.0 out of 5 stars Highly Recommended
Reviewed in the United States on March 29, 2019
Verified Purchase
This book contains two novelettes: Trumpet Of Triton, featuring Ravenwood, Stepson of Mystery & Mesmerized, featuring The Moon Man, two original characters created by Frederick C. Davis for TEN DETECTIVE ACES. In Trumpet of Triton, tablets are discovered from sunken Atlantis that has the ability of raising the Lost Continent to the surface once more. The trumpet, a conch shell, is the trigger that will cause the destruction of great cities or raise Atlantis. Darla Whitfield comes to Ravenwood for help, but her father, who knows more about the latest terror, doesn’t want him involved. But it’s up to Ravenwood and Detective Kocheck to discover the secrets and stop the Atlantiers from once more raising the island of power.
In the second story we’re treated to a new Moon Man story. A German scientist has stolen Hitler’s hypnotic machine and brought it to America. He attempts to get it to an American agent, but mob boss, Big Nick Martini has it and is using it for monetary gain, and ridding his political opponents by making them commit suicide. Detective Stephen Thatcher is investigating the suicides while The Moon Man goes after Big Nick.
These were fun stories in the old pulp tradition, and the author captures the characters in delightful new adventures. They come alive once more to rid the world of insidious crime while maintaining the dignity of the old. Highly recommended.
Read more
3 people found this helpful
Helpful
Comment Report abuse

Charles Millhouse
5.0 out of 5 stars Pulp Stories are Alive and well.
Reviewed in the United States on April 18, 2019
Verified Purchase
Pulp stories don’t get the recognition they once did, and that ashame. Mr. Williams is one of the best writers in the New Pulp field. His prose is solid, dialogue foolproof and style unmatched. You can tell he is a lover of pulp stories. His work leaps from the page and drags you in and you don’t want to stop. I throughly enjoyed Ravenwood Stepson of Mystery in Trumpet of Triton: Pulp Science Fiction Short Stories. It’s imagitive and highly entertaining.
Read more
3 people found this helpful
Helpful
Comment Report abuse
See all reviews