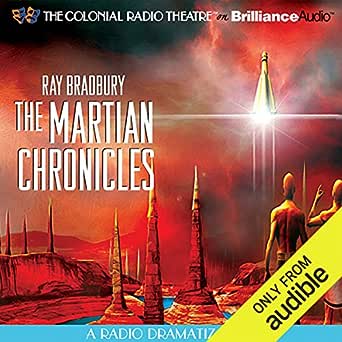 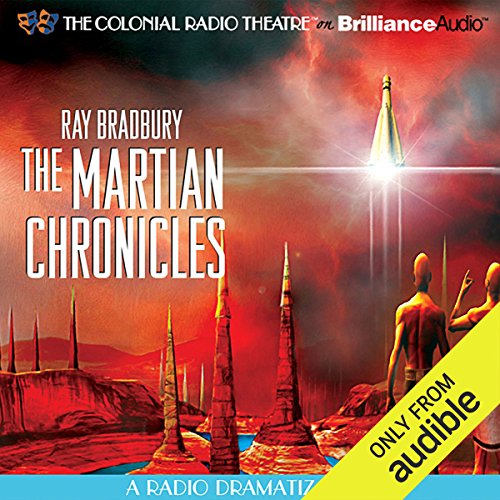 4.1 out of 5 stars
4.1 out of 5
19 customer ratings
How does Amazon calculate star ratings?
Amazon calculates a product’s star ratings based on a machine learned model instead of a raw data average. The model takes into account factors including the age of a rating, whether the ratings are from verified purchasers, and factors that establish reviewer trustworthiness.
Top Reviews

Tim Lukeman
TOP 1000 REVIEWER
5.0 out of 5 stars The Martian Chronicles & some of its adaptations
Reviewed in the United States on June 21, 2019
Format: Audio CDVerified Purchase
Since Amazon is lumping all reviews of the various versions of THE MARTIAN CHRONICLES together, I'll take advantage of that & review 4 of them at once.

The Book - As poetic & stirring as it was when it was first published, this collection of short stories, strung together like pearls on a thin golden thread of connecting narrative, remains a beautifully bittersweet experience. Complaints about outdated science are utterly beside the point; Bradbury was writing about Mars as a state of mind, a focus for countless dreams & imaginings over the centuries.

And more than that: he was writing both allegory & stinging satire about the state of America: and while he draws on conditions of the 1940s & 1950s, just about everything is still applicable today … sadly. The destruction of an ancient civilization & way of life at the hands of greedy, grasping conquerors is an all too common story in human history, including that of America. In a way, the Earthmen are humans at their worst, while the Martians are humans at their idealized best. (Not in every case, but more often than not.)

But in the end, the book succeeds most of all because of its lyrical beauty & depth of feeling. The prose is scintillating, with lines crafted into jewel-like images; while the emotional content is enhanced by that glittering lattice of words. It linger in memory like a magical dream.

The Colonial Radio Players adaptation - With 5 hours & 38 minutes to work with, this full-cast radio play of the book pretty much does justice to it. One word of warning: it does use the revised edition of the book, with "Way in the Middle of the Air" removed. I feel that story especially deserves to stay, as the ugliness of the racism it depicts isn't merely a part of the past, but is still unfortunately alive today. That said, this is a fine effort that preserves the overall tone of the stories very well indeed. There are some uneven moments; but when it's on-target, it's a real pleasure to hear.

The BBC radio adaptation - Sadly, despite good voice actors, this hour-long version fails in two major ways. Firstly, it's solely about the Earthmen who go to Mars, with no real presence of the Martians or their distinct philosophy to serve as a counterpoint. Even in stories where the Martians did appear, they've been excised. Secondly, it doesn't translate well as a British story. Bradbury is the writer & poet of a vanished, ideal America; his viewpoint from a heartland childhood is absolutely necessary to the book as a whole. Substituting a British background just doesn't work. Anyone familiar with the book will be deeply disappointed; anyone coming to this radio play first & then reading Bradbury will suffer a sense of dislocation & wrongness. A pity, as I was expecting many good things from this attempt. I wish I could have liked it more.

The Dimension X radio adaptation from 1950 - For those who feel that the mere hour used for the BBC radio version explains its failings, this 25-minute version shows what can be done with a gifted script (by writer Ernest Kinoy). Here he weaves several of the stories together, sometimes using just parts of them, and achieves a synthesis that captures the true essence of the book. The adaptation is presented simply as "selections" from the (then) newly published book; but it gives us sympathetic Martians (a fine rendering of "Ylla" complete with the use of "Drink to Me Only With Thine Eyes" that plays such an important part); and it incorporates unexpected stories such as "'There Will Come Soft Rains'" to powerful & moving effect. To me, this would be an ideal introduction to the book for those curious about it.

(I've covered the 1980 TV mini-series in a separate review. The gist: while awkward in some spots, it's strangely magical in putting an essentially unfilmable book on film. "Night Meeting" in particular is a gem.)

The book itself is what matters most; but for those who are curious about adaptations in other media, some of them are also worth exploring. Not for every taste, to be sure, but a small masterpiece that continues to dazzle readers. Most highly recommended!

Dan N
3.0 out of 5 stars book on CD
Reviewed in the United States on January 17, 2014
Format: Audio CDVerified Purchase
I had high hopes for this title but felt a little let down. Some people obviously love it but I am not one of them. Part of me wanted to quit listening which is pretty bad.......

It should also be noted that disc #4 seemed to stop about half way through. Brand new and straight from the package to the CD player. There were no scratches. Comparing the underside to the others revealed that it had been cut short during the writing process. I hope that mine was just a fluke for the sake of others.
Read more
Helpful
Comment Report abuse

Carcosa
5.0 out of 5 stars Perfect....
Reviewed in the United States on March 11, 2012
Format: Audio CDVerified Purchase
CRT has really done the impossible....they have brought the complete table of contents of the book to life, and maintained faithfulness to the stories (it's not really a novel) and to Bradbury's poetic prose, and that is no mean feat. It's spread over 6 discs and runs nearly six hours. Jerry Robbins and the CRT have numerous productions under their belt and are the most prolific of production companies in the genre of "theater of the ear". Give them a try, you won't be sorry.
Read more
One person found this helpful
Helpful
Comment Report abuse

Peanut09
4.0 out of 5 stars Really Strange Read!
Reviewed in the United States on September 10, 2012
Format: Audio CDVerified Purchase
This book is so different from anything I have ever heard and so it took me a minute to really get into the stories. This book was recommended to me by a close friend so I ordered it and I am glad I did. This was written years ago but you would not know it from the various stories in it. I found this book to be exciting, strange and most entertaining!
Read more
Helpful
Comment Report abuse

Amazon Customer
2.0 out of 5 stars Dark
Reviewed in the United States on October 29, 2018
Format: Audible AudiobookVerified Purchase
The stories were too dark for my taste and I didn't like how it was a collection of many stories rather than one. They were however well written and creative. The audio quality was also good.
Read more
Helpful
Comment Report abuse

Amazon Customer
5.0 out of 5 stars Bradbury,s classic tale
Reviewed in the United States on January 10, 2012
Format: Audio CDVerified Purchase
I bought it for my eleven year old and he has listened to it every niight until he finished it tonight. A great presentation of a terrific book.
Read more
One person found this helpful
Helpful
Comment Report abuse
See all reviews from the United States