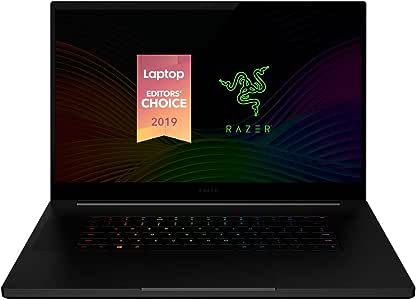 Visit the Razer Store
4.4 out of 5 stars 8 ratings
Available at a lower price from other sellers that may not offer free Prime shipping.

Buy this product as Renewed and save $900.99 off the current New price.

The Razer Blade Pro is the ultimate mobile workstation solution, with a 9th Gen Intel Core i7 6-Core Processor, a 512GB PCIe M. 2, and 16GB of onboard memory (upgradeable to 64GB). Whether it's editing a short film or rendering motion graphics, you'll be equipped with the power to produce high quality work from anywhere with the 20 series NVIDIA RTX graphics card. Immerse yourself with the expansive, 17. 3" display, equiped with a 240Hz refresh rate that offers a smooth and seamless viewing experience. The Razer Blade Pro is built with next generation technologies ranging from wireless 802. 11ax, USB 3. 2 Gen2, and a UHS-III SD card reader for transferring files on the go—no dongle required. With Razer Chroma, customize your Razer Blade Pro keyboard with shortcuts, hotkeys, and color profiles.

Colin K.
3.0 out of 5 stars An excellent product worthy of any gamer or professional, but plagued by quality control issues
Reviewed in the United States on October 13, 2020
Capacity: 9th Gen i7-9750HStyle: RTX 2070 Max-Q | FHD 240Hz | 512GBVerified Purchase
I really wanted to give this a 5-star review as it is, by far, the best laptop I have ever purchased, but for reasons I'll explain later, I can only give it a 3.

Look and feel:
From the moment you open the box, you can tell that Razer spared no expense in design or construction. The laptop has a firm, solid metal case that feels durable and will last for years of late-night gaming and coding sessions without adding unnecessary bulk. It reminds me of my old aluminum Powerbook. When closed, the unit measures under 2cm thick, slim enough to fit comfortably in any 17.3" bag (I use the one from Tomtoc) or sleeve.
Razer offers a no-frills, minimalist design both inside and out. Volume, brightness, and media controls are accessed using fn and F-keys. There are none of the extra buttons or weird hotkeys, most of which you'll never end up using anyway, that the other vendors have. The keyboard is backlit using 24-bit color LEDs that can be individually assigned and controlled by software. The screen and keyboard are brighter than any I've experienced on a laptop before.

Battery life:
The laptop has an Intel UHD integrated GPU and a dedicated RTX 2070, both of which are selectable by software and can be used simultaneously. When running exclusively on the Intel, i.e. not running games, the battery life can be extended well beyond that of single-GPU gaming laptops. I have yet to actually drain the battery, but I would estimate 4-6 hours depending on how conservative you are.

Linux compatibility:
I ran Manjaro with kernel 5.8.11 from an external SSD connected to one of the two USB-C ports. This is probably the first laptop I've had where every onboard device runs seemingly perfect in Linux. That includes, but is not limited to: USB ports, wireless, Bluetooth, brightness controls (panel and keyboard), power management, all of the brightness, volume, and media hotkeys, touchpad with multi-finger controls, suspend/resume functionality, lid and button controls, native framebuffer console, console switching, UEFI boot, and GPU selection in software. Games run under Steam, WINE, and Proton just as well as they do on any recent NVIDIA GPU. However, the default GPU is the Intel UHD, which will not perform well. For games that do not have the ability to run on a specific GPU, you may need to run them using the prime-run script in order for them to use the RTX 2070. I was also able to get Plasma/Wayland to run reasonably well, but attempting to run a game on the RTX in this environment will cause an X11 error. I did not spend much time into diagnosing this, and if Wayland support is important then you are probably avoiding NVIDIA anyway. The firmware allows you to disable Secure Boot, however it does not come with interface to manually add bootloaders such as GRUB or systemd-boot. You will need to use efibootmgr to do this from Linux or EasyUEFI from Windows. It will automatically detect default bootloaders (bootx64.efi) from external media, so you don't need to do anything weird to boot from an external drive, installation or otherwise. It can also BIOS boot as an option, but you should not have to do it this way in a modern Linux distro.

The cons:
The laptop can get hot to the touch due to its thin aluminum case, I recommend using a lap desk with cooling fans for games. Without a cooler is OK, but the built-in fans will get very loud depending on what you're running.
I would have preferred a full size keyboard with numeric keypad over the large speakers. The speakers are very loud but do not really add any value in the audio quality, so in my opinion they are not worth losing the extra keys.
The lid is very difficult to open from the center, so I usually press inward from the front corners to loosen it from what seems to be a strong magnet holding it shut.

Why 3 stars instead of 5:
Unfortunately, despite being an amazing piece of hardware, either I am very unlucky or Razer has a serious quality control problem. This is the second laptop I ordered from them, the first one was an identical model that arrived with a dead LCD backlight. I was able to exchange it through Amazon the same day after attempting to call Razer Support with no answer. This laptop (the second one) had a problem that caused it to freeze, not blue-screen or kernel panic, just freeze, for no apparent reason after anywhere between 30 minutes and a week since booting. It would do this in both Windows and Linux. I determined that it was more likely to freeze early (2-3 days) if it had been through multiple suspend/resume cycles, as opposed to operating continuously, but it took about a month and two round trips to the repair center to finally convince Razer Support that it was not a software problem. They ultimately replaced the motherboard on the second trip (after doing nothing for the first trip) which ended up resolving the problem.
My advice for dealing with their support team is as follows:
Do not call their phone number - they will not answer, put you in a queue, or give you the option to leave a callback number - go to their support website and open a ticket.
Do not perform a factory reset before shipping it to the repair center - this was the mistake I made when I first sent it to them, they blamed the problem on outdated drivers and sent it back without making any repairs.
Provide as much information as possible - this is true for any help desk (I manage one). Give them log files, screenshots, videos, and anything else you can think of that may be used to diagnose the problem. They might not use any of it, but at least you made the best effort.

This is the best gaming/working laptop if you can get this below $2000. The build quality is just beyond amazing... This is the MacBook for Windows and you could also game on it!
Read more
Helpful
Comment Report abuse
See all reviews

So far so good. Good value for the money.
Read more