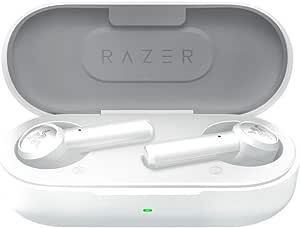 Visit the Razer Store
3.6 out of 5 stars 73 ratings
Available at a lower price from other sellers that may not offer free Prime shipping.

3.6 out of 5 stars
3.6 out of 5
73 global ratings
How are ratings calculated?
To calculate the overall star rating and percentage breakdown by star, we don’t use a simple average. Instead, our system considers things like how recent a review is and if the reviewer bought the item on Amazon. It also analyzes reviews to verify trustworthiness.

ANDROiD_eKa
5.0 out of 5 stars The sleekest and cleanest bluetooth earbuds you can buy... again and again! :)
Reviewed in the United States on October 10, 2020
Style: BT True WirelessColor: Mercury WhiteVerified Purchase
I originally bought the black original model and it was my first delve into the bluetooth wireless world. There were some trade-offs obviously because of low compression audio from bluetooth compared to line-in. No support for Qualcomm aptX so not for audiophiles.

Aside from that here are some PRO's:

-design of earbud is pleasing and professional, especially the mic stick (there are some horrible designs out there)
-no noise hissing at high sounds levels
-excellent quality 13mm drivers I mean it's night and day difference with other bluetooth earbuds that are smaller diameters
-clean white aesthetics
-simple limited app control presets
-low latency gaming really works

Some CONs I found are:

-black sleeved charging cable instead of white
-battery life is above average not the best.
-pill case will not support custom earbud tips

Luis Estevez
1.0 out of 5 stars Such high expectations.....
Reviewed in the United States on October 21, 2020
Style: BT True WirelessColor: Mercury WhiteVerified Purchase
I really had high expectations for these earbuds. I believed that the Razer brand was at another level (specially for the prices of their products). Now don't get me wrong, when the earbuds are working they sound great! They feel awesome! But.... Right out of the box the right earbud wasn't working. After talking to Razer support we got it to work. After this every 30 minutes connection would drop for about 10 seconds then only the left earbud would reconnect automatically. I would have to manually turn on the right earbud. Then again it would disconnect and I have to do the same process over and over again.

It is sad that once I started reading on the internet I found that this is something that is happening to a lot of people, the exact same problem with the bad connection and the right earbud.

I am definitely asking for my money back and returning this. Shame on you Razer.
Read more

Brandon
4.0 out of 5 stars Minor Annoyances Prevent a Perfect Experience
Reviewed in the United States on October 21, 2020
Style: BT True WirelessColor: Mercury WhiteVerified Purchase
Managed to snag this set for $80 during the Prime Day sale, but have owned the black versions of these since that product launched. What can I say? These are probably my favorite true wireless Bluetooth headset to date, and the only ones I have purchased twice. But as the title implies there are a few minor but nagging annoyances that prevent these from being perfect.

Sound quality is excellent for the price, with a powerful bass and fairly detailed mids with somewhat bright highs (these can be just a tiny intense for my liking, but can be helped quite a bit with an equalizer). If you have Dolby Atmos integrated into your phone (or an Apple device) the headphones truly reach the maximum potential in their budget bracket, and I prefer the Razer’s sound signature over higher priced competitors like AirPods. As a very large man with similarly large ears the comfort and fit is great, especially with the silicone ear tip covers but this is obviously different for everyone. I could see these being uncomfortable for a smaller person. As a really quick mention, the touch controls generally work well and I don’t have any complaints.

Battery life is great for me. However this is coming from a person who usually doesn’t listen to music for more than 3-4 hours at a time; I’ve had them die on me a small number of times but like my listening habits, these usually last for at least 3-4 hours of moderately high volume. Durability is great too: I am 6’3” and have dropped them multiple times when fumbling to take them out of my ears, and even after way more falls than they were probably designed for they’re still going strong.

On the subject of downsides, a minor caveat is that these use the SBC sound codec so you’ll be stuck with a lower theoretical maximum audio quality because Razer was too cheap to license other, much better audio codecs (come on guys, really?). To be fair, unless you are a hardcore audiophile I’m doubtful that you would notice, especially since this issue is somewhat remedied by the large, high-quality drivers inside. Also seeing as though these are in direct competition with AirPods it would have been nice to see more features like ear detection/ auto pause when taken off.

Case quality is also hot, hot garbage. Like, bad enough to warrant its own paragraph. The construction is that of the cheapest, lightest, most hollow feeling plastic that you could imagine, and can be easily scratched with a fingernail. The case on my first pair did not age well; after being transported in a backpack over the past year they look as if I had rolled them around in a pile of rocks. It’s quite ugly looking now. My first pair’s case hinge is also starting to get a little wobbly, due in no small part to the cheap and nasty plastic. I was willing to look past the other annoyances but I’m taking a star off for this one.

Other reviews mentioned pairing issues but I have not experienced anything of the sort, so I would chalk those up to a combination of lemons, hardware/ software incompatibility, and possibly some lack of technical know-how. These paired up with my PC just fine and I have used them across a multitude of devices across all platforms. Just make sure you have a Bluetooth 5.0 device and you should be just fine (though I have managed to pair these to a Bluetooth 4.2 laptop without any issues but your mileage may vary). Just to note: when switching between phones/ tablets/ computers I had to unpair them and then pair them to the new device, but as far as I know this is pretty standard.

Overall despite their flaws, I’d highly recommend the Razers! I’ve been using them heavily over the past year and aside from the downsides listed I really love these things. If there ever is a Gen 2 I’d like to see a much better case, better Bluetooth codec support, and maybe in-ear detection.

felipe valdes
3.0 out of 5 stars Do not waste your money
Reviewed in the United States on October 14, 2020
Style: BT True WirelessColor: Mercury WhiteVerified Purchase
As a Razer fan I expected more than this, unfortunately I did not take the reviews seriously and bought them anyways, just out of the box and the right earbud was disconnecting constantly every 2 min or less, I though that it was the battery so I charge it, nothing I try installing the Razer app on my phone same result Nothing seems to work so I will be returning them asap. I am really disappointed.
Read more
One person found this helpful
Helpful
Comment Report abuse

Ton24
5.0 out of 5 stars The selling point of this wireless earbuds (Low Latency mode) is good for gaming.
Reviewed in the United States on October 22, 2020
Style: BT True WirelessColor: Mercury WhiteVerified Purchase
I just bought this last week because of the prime day sale. I was unsure at first if the earbuds were good but I was surprised it actually was great/good for gaming. The low latency mode actually works, I experienced no lag so far and had no problems with Bluetooth connectivity so far. The earbuds sound great but not the best but I don't think it'll matter if your not an audiophile. the only thing I kind of noticed is the battery life is not that great. the maxed it could go on for me is almost 4 hours which is not that bad but mildly annoying if your in the middle of a game but I do recommend this earbuds if you play games casually and not on competitive games like fortnite, COD, and etc.
Read more
Helpful
Comment Report abuse

Razer's supporter
5.0 out of 5 stars worth the buy
Reviewed in the United States on October 23, 2020
Style: BT True WirelessColor: Mercury WhiteVerified Purchase
love the clean design and its sound quality. i've faith in razer's products and have always trusted its bass boost. this hammerhead's boost did not disappoint me as usual.

despite coming across bad reviews about this headphones, i still proceeded to make a purchase and was glad i did. the various touch functions worked well for me and its connectivity is faster than i put them in my ears.

the 3hr battery life does not really affect me as it is normally the duration i put em in my ears. though the material of its casing are like what they said, pretty low quality, but i guess i could close an eye on it given that razer has done a pretty good job on the functions advertised.
Read more

jose ledesma
4.0 out of 5 stars Good
Reviewed in the United States on October 16, 2020
Style: BT True WirelessColor: Mercury WhiteVerified Purchase
Product is really good out of the box the sound quality for $100 could be better but for the most part they sound good, a lot of reviews were talking about it being choppy and that has to do with the low latency gaming mode, it’s buggy and it makes the audio choppy and disconnect, idk if it’s a headphone issue or if could be fixed with a driver update for them but regardless when not on low latency mode they still work perfectly fine
Read more
Helpful
Comment Report abuse
See all reviews

Raphael
5.0 out of 5 stars I know I'm paying for the brand but.... I love them
Reviewed in Canada on October 27, 2020
Style: BT True WirelessColor: Mercury WhiteVerified Purchase
I've always loved Razer Hammerhead products. Although I know they're a bit pricey, they're way better than Airpods and I really like them. Not a day goes by without using them.
Read more
Report abuse