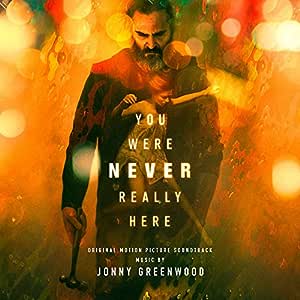 Scored by Radiohead guitarist/keyboardist Jonny Greenwood, who s previous soundtrack Phantom Thread was nominated for a 2017 Academy Award. As a work-in-progress, YWNRH won 2 awards (Best Actor, Best Screenplay) at the 2017 Cannes Film Festival. Film debuted in theaters 4/6/18. For Radiohead fans, the result might be his most satisfying film music to date. Rolling Stone Greenwood s You Were Never Really Here score is easily his most experimental and eclectic film music to date. IndieWire The restraint of his score is a testament to his interpretive abilities, but even as a standalone album, You Were Never Really Here is an engrossing listen. Pitchfork

Gary Richardson
5.0 out of 5 stars Jonny's best effort to date
Reviewed in the United States on May 12, 2018
Verified Purchase
This album is the most approachable of any of Jonny's soundtrack efforts, especially for Radiohead fans. Highly recommended. There are moments of absolute brilliance that that make me wish he would write symphonies, little vignettes that could have been developed into something more and I hope he goes that route in the future.
Read more
One person found this helpful
Helpful
Comment Report abuse

Wade
5.0 out of 5 stars Beautiful colored vinyl!
Reviewed in the United States on February 17, 2020
Verified Purchase
What an excellent score by Jonny Greenwood and pressed on beautiful orange vinyl. A must have.
Read more
Helpful
Comment Report abuse

BF Kyle
5.0 out of 5 stars Five Stars
Reviewed in the United States on May 17, 2018
Verified Purchase
jonny greenwood's finest. i put it up there with his score for There Will Be Blood.
Read more
Helpful
Comment Report abuse

HLFLFE
5.0 out of 5 stars Outstanding.
Reviewed in the United States on May 4, 2018
Verified Purchase
This score/soundtrack (not sure how this distinction was made) is absolutely amazing. I’m hoping to see it at the oscars next year.
Read more
Helpful
Comment Report abuse

Paul AllaerTop Contributor: Classical Music
TOP 50 REVIEWERVINE VOICE
4.0 out of 5 stars Radiohead's Jonny Greenwood proves his versatility yet again
Reviewed in the United States on April 28, 2018
I recently saw “You Were Never Really Here” in the theater (more on that later). There is an eclectic choice of music in the film, and imagine my surprise when the end credits started rolling and I noticed that none other than Jonny Greenwood composed the score, yes, the guitarist from Radiohead. Greenwood has in recent years built himself quite a reputation as a movie composer (he was nominated earlier this year for an Oscar for his previous movie score, the gorgeous and outright classical score for “Phantom Thread”, and should’ve won—instead Alexandre Desplat won for “The Shape of the Water”).

“You Were Never Really Here” (14 tracks; 41 min.) opens with “Tree Synthesizers”, a dreamy introduction. "Sandy's Necklace" is an off-center tune as we see Joe (the main character played by Joaquin Phoenix) cleaning a hotel room (for reasons unclear to us at that time) at the movie's beginning. Nausea is a hard-charging synthesizer-fronted tune. "Playground (Bass Clarinet)" is an abstract piece. "Dark Streets" and later "Dark Streets (Reprise)" reminds me of Cliff Martinez. "Nina Through Glass" is a contemplative tune. The soundtrack concludes with the delightful "Tree Strings", the same melody with which the score opens, but this time brought completely differently. Just beautiful. It is remarkable how different the scores for “Phantom Thread” and “You Were Never Really Here” are, yet how great both are. I suppose it is only a testament to the immense talent that is Jonny Greenwood. If Radiohead ever calls it a day, Greenwood surely won’t be lacking for other work!

As to the movie itself, it is a gritty crime drama in which the Joaquin Phoenix character descends on an urban hell, in which he attempts to free a trafficked girl, and then things go… (well, I won’t tell spoil). From the same Scottish director who brought us the excellent "We Need To Talk About Kevin", “You Were Never Really Here” is very intense and at times uncomfortable. But there is no denying the outstanding performance from Joaquin Phoenix, who is in virtually every frame of the movie. “You Were Never Really Here”, both the soundtrack and the movie, is a WINNER.

Harsha Vardhan
4.0 out of 5 stars Trailer Music
Reviewed in the United States on December 1, 2018
If you are looking for the awesome piece of music you heard in the trailer, it is in track #2, "Sandy's Necklace", and starts at the 1:00 mark.
Read more
Helpful
Comment Report abuse
See all reviews

Miss L Sorbie
5.0 out of 5 stars Arrived promptly
Reviewed in the United Kingdom on May 26, 2020
Verified Purchase
Item as described and arrived promptly with no problems.
Read more
Report abuse